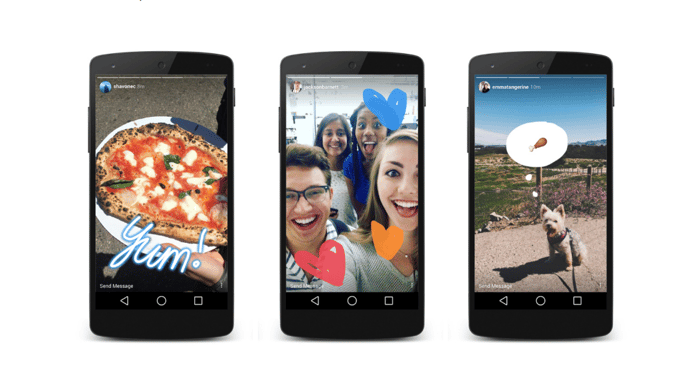 As it crosses that milestone, Instagram is preparing to insert ads into the middle of users' Stories to take advantage of its popularity. Ads will start rolling out in a few weeks with several big brands. With an audience already the size of Snapchat's -- and growing even faster -- combined with the ad tech of Facebook, Instagram Stories is well on its way to becoming Facebook's next billion-dollar product.

Snapchat and Facebook already did all of the legwork

This isn't the first time Facebook has copied a feature from its competitors, but it's one of the most successful. And Facebook is well positioned to unabashedly clone products and find success because it has massive scale and some of the best ad technology in the industry.

Instagram has 600 million monthly active users. It also has 500,000 active advertisers on its platform. In other words, it has an unfair advantage over Snapchat when it comes to growing a user and advertiser base for Stories.

More than that, all of the heavy lifting was done by Snapchat and Facebook. Snapchat introduced both consumers and advertisers to the vertical video and story format. Advertisers are already producing vertical video ads for Snapchat, they can use those same ads for Instagram Stories. And with Instagram, advertisers can use Facebook's targeting capabilities to make their ads more effective on a cost-per-impression basis. Snapchat's targeting capabilities and ad tech isn't nearly as good as Facebook's.

If Snapchat can make $1 billion, Instagram Stories can't be far behind

Snapchat has internal projection of $500 million to $1 billion in 2017, according to a leaked slide deck from last year. Additionally, analysts at eMarketer project revenue of $935 million this year.

Of course, not all of Snapchat's revenue comes from its Stories feature. Snapchat's Discover section, which features content from big-name publishers, is a big revenue driver. Snapchat's sponsored filters -- the things that make your selfies awesome -- are also a growing source of ad revenue. But Stories are expected to become Snapchat's biggest source of revenue in 2017, according to eMarketer, accounting for 38% of the total.

With the advantages of a rapidly growing user base and a pre-existing advertiser base, Instagram should be able to generate comparable revenue to Snapchat's Stories feature -- about $355 million this year. Additionally, Facebook's purchase of MSQRD last year gives Instagram the ability to create filters just like Snapchat. That could be another potential revenue source.

Facebook's ad revenue has been growing extremely quickly over the last few years. CFO Dave Wehner warned investors ad revenue growth would slow meaningfully in the second quarter, however, as it faces ad load saturation in its main News Feed.

The $1 billion or so Instagram Stories might generate over the next couple years is small potatoes compared to nearly $24 billion Facebook has generated from ads over the past four quarters. But considering that it represents pure growth, it's a nice boost as Facebook struggles to find more areas to insert ads.

Analysts are currently projecting Facebook's revenue growth will slow down to about 34% next year -- about $10 billion in absolute growth. It's a good bet that a significant portion of that growth will come from Instagram -- and Stories could be a key part of that.