The FCC recently declared that AT&T (NYSE:T) and Verizon's (NYSE:VZ) "sponsored data" programs -- which exclude their own streaming media from data caps -- violate net neutrality rules. Many streaming companies like Netflix (NASDAQ:NFLX) believe that practice, also called "zero rating", gives telcos an unfair advantage as they expand into the streaming market with their own data-free content. 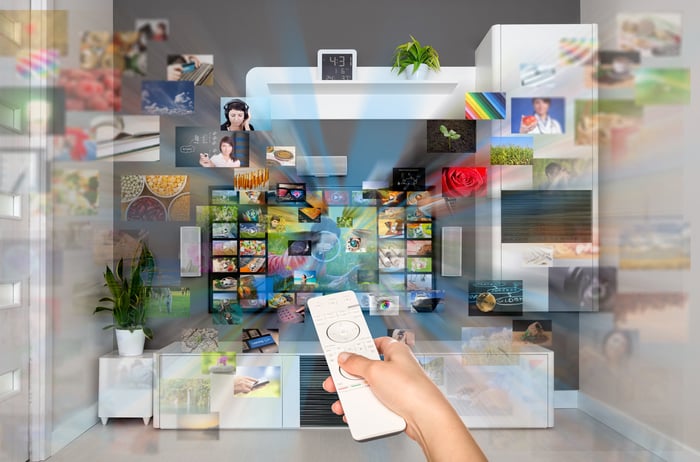 AT&T lets other companies zero rate their content across its networks for a fee, but the FCC claims that those fees are much higher than the ones it charges its own subsidiary, DirecTV. The FCC also expressed similar concerns about Verizon's comparable FreeBee Data 360 program. Will the FCC actually force AT&T and Verizon to drop its sponsored data strategies, or does all this sound and fury signify nothing?

What sponsored data means to AT&T

Sponsored data lets AT&T bundle together its wireless and DirecTV platforms. To build the foundation of that ecosystem, AT&T started offering unlimited wireless data plans for DirecTV subscribers. All streaming DirecTV content was then zero rated for AT&T wireless customers, and AT&T launched new streaming platforms like DirecTV Now -- a $35 per month service with 100 channels -- to expand that ecosystem.

By zero rating all that content, AT&T enables its customers to watch DirecTV across mobile devices, PCs, and TVs without worrying about data caps. That gives it a distinct advantage against Netflix, which is throttling the quality of its own content and letting users download videos locally to reduce their data usage.

This is why AT&T agreed to acquire Time Warner (NYSE:TWX) for $85 billion last year. By adding HBO, CNN, Warner Bros. movies, and other content to that zero rated ecosystem, AT&T could create a prisoner-taking media ecosystem which widens its moat against Netflix and its competing carriers. But if regulators force AT&T to stop zero rating its own content, its DirecTV platforms could become less competitive, and the Time Warner buyout would become much less appealing.

What sponsored data means for Verizon

Like AT&T, Verizon is building a zero rated ecosystem for selling advertisements and streaming videos. That's why it acquired AOL in 2015, which it plans to merge with Yahoo's internet business if that long-delayed deal finally closes.

Verizon has integrated video content from those companies into go90, a mobile video app it launched in late 2015. It subsequently zero rated that app for its wireless subscribers to counter AT&T's DirecTV push. Verizon also started offering data-free streaming of NFL games through the NFL Mobile app. To address criticisms about those apps violating net neutrality, Verizon launched the FreeBee Data 360 program, which let other companies pay to zero rate their own content across its networks.

All bark, no bite?

The FCC's ruling is a harsh condemnation of AT&T and Verizon's sponsored data strategies, but it probably won't mean much in the long run. FCC Chairman Tom Wheeler will be replaced on Jan. 20, and his likely successor, Republican Commissioner Ajit Pai, said that the report "does not reflect the views of the majority of Commissioners." Pai also claimed that such "midnight regulations" were "sad".

AT&T and Verizon have both repeatedly defended their sponsored data programs as consumer-friendly ones that let subscribers watch video without racking up data fees. However, both telcos clearly depend on these plans to expand their ecosystems, squeeze out more revenue per user (via ads or add-on services), and offset their slowing growth in postpaid wireless subscribers.

The FCC report probably won't lead to any regulatory actions against AT&T and Verizon, but it reveals how heavily both companies are leveraging their dominance of wireless networks to build content-rich digital ecosystems.

That strategy could help them counter streaming rivals like Netflix, which have piggybacked off their networks while convincing customers to drop their traditional pay TV services. But it could also corral consumers within telco-controlled streaming ecosystems -- an anti-competitive move which could be tough for Netflix (which lacks the ISP infrastructure) to retaliate.