Neha Chamaria, Evan Niu, CFA, and George Budwell
(TMFNehams)
Author Bio
A Fool since 2011, Neha has a keen interest in materials, industrials, and mining sectors. Her favorite pastime: Digging into 10Qs and 10Ks to pull out important information about a company and its operations that an investor may otherwise not know. Other days, you may find her decoding the big moves in stocks that catch her eye. Check back at Fool.com for her articles, or follow her on Twitter. Follow @nehamschamaria
Follow @@nehamschamaria

With dividend stocks historically outperforming non-dividend payers, adding some high-quality dividend stocks to your portfolio is a great way to set up for what could be a volatile year ahead. By high-quality stocks, we don't mean just high dividend yields, as it's even more important that the dividend is growing and is sustainable at higher levels to keep generating income for you for years to come.

With that in mind, we asked three of our contributors to pick one dividend stock each that they believe can withstand volatility and continue to reward shareholders richly in 2017. Find out why they chose Johnson & Johnson (NYSE: JNJ), Illinois Tool Works (NYSE: ITW), and AT&T (NYSE: T). 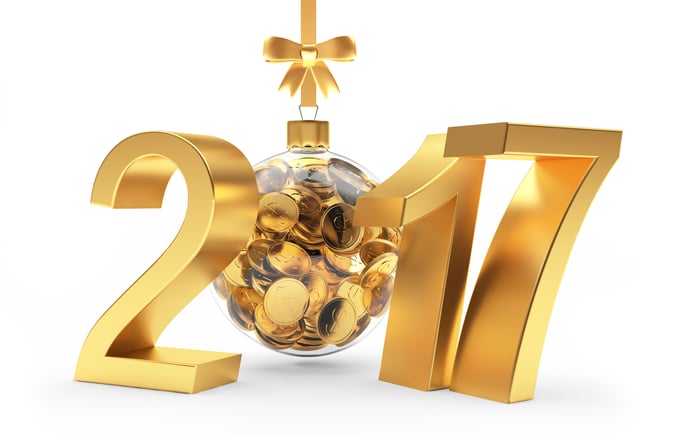 This healthcare company offers a top-flight dividend and strong growth

George Budwell (Johnson & Johnson): Johnson & Johnson is the world's largest healthcare company and a Dividend Aristocrat to boot. Apart from being a leader in the high-growth pharma space and having a strong track record of consistent dividend hikes, J&J is a compelling stock to add to your portfolio this year simply because of all the favorable tailwinds surrounding healthcare stocks as a whole right now.

While it may not sound like the healthcare sector is set to push higher with the repeal of the Affordable Care Act, or Obamacare, well underway and the drug-pricing debate continuing to grab headlines. The facts on the ground say otherwise.

First off, the repeal of Obamacare probably won't have a material impact on the top or bottom lines of major healthcare companies like J&J. After all, it's a poorly kept secret that a person's real-world access to novel medicines -- especially those in the oncology space, where J&J excels -- is generally dependent on the type of coverage he or she carries.

In other words, individuals with incomes at or below the poverty line aren't the driving force behind the ever-growing demand for healthcare services in general and high-priced specialty medicines in particular. So there's little reason to believe that J&J won't continue to benefit from the aging global population that's sparking a steady rise in the consumption of healthcare products and services.

Next up, J&J will clearly benefit from Donald Trump's proposed tax reforms -- especially those aimed at lowering the tax burden on foreign profits. Like most of its peers, J&J has been reluctant to repatriate foreign profits due to the negative impact on its bottom line. If this outstanding tax issue is resolved in favor of global corporations at large, this healthcare giant would then have access to its cash held abroad -- and cash flows -- that could be put to good use domestically to create value for its shareholders.

All in all, J&J's fundamental outlook for 2017 and beyond remains strong -- despite the negative headlines swirling around the pharma industry on a near-daily basis right now.

Neha Chamaria (Illinois Tool Works): Most industrial stocks may have gone ahead of themselves in the past couple of months, but I'm not shying away from picking one of them as my favorite dividend stock for 2017. Illinois Tool Works' dividends have never failed to impress me, and I thik that trend will continue for some time.

The conglomerate increased its dividend by a whopping 18% last year, pushing its compounded average dividend growth rate to 14% since 2012. I'm confident of another dividend hike coming this year, and it could be a big one again. My optimism is based on the company's growth prospects: Illinois Tool Works is guiding for earnings-per-share growth of 9% at midpoint for 2017, and that is without factoring any potential uptick in manufacturing activity under Trump's presidency. The company also intends to convert 100% of its net income into free cash flow.

Even if the situation turns adverse, a nice mix of cyclical and defensive businesses in its portfolio should help Illinois Tool Works sail through. It operates seven segments serving diverse industries: automotive, construction, healthcare, oil and gas, food equipment, electronics, and packaging. The company's efforts to divest several low-profit businesses in recent years have also shored up margins, so much so that management is targeting operating margins above 25% by the end of 2018.

It's hard to find companies with such a clear line of sight. Illinois Tool Works has its growth catalysts and an efficient management that's focused on margins and shareholder returns in place. A dividend yield of 2% may not be much, but when it comes with a sustainable and growing payout, income investors needn't look elsewhere.

Evan Niu, CFA (AT&T): Defensive utility stocks have long been a hallmark of income investing, thanks to greater resilience to economic downturns that reinforce reliable cash flows -- the same cash flows that fund dividend payouts. At current prices, AT&T shares are yielding 4.8%, a healthy payout by any measure. It's not unheard of for AT&T's dividend yield to reach levels of 5% to 6%, but shares performed quite well in 2016, pushing the yield down in the process. While AT&T's business stopped growing long ago (operating revenue was up a modest 4.6% last quarter), investors don't expect growth these days and are instead satiated with generous dividend payouts.

This year will be quite notable for AT&T for two related reasons: its proposed acquisition of Time Warner (NYSE:TWX) and the way the incoming Trump administration will view the deal. The deal's enterprise value is pegged at $108.7 billion when including Time Warner's net debt, and the acquisition has naturally attracted immense regulatory scrutiny given the competitive implications. AT&T's vision of a vertically integrated telecommunications giant isn't exactly unprecedented; telecommunications companies have been trying to differentiate themselves for years to fend off commoditization and have become increasingly interested in content over the past decade.

President-elect Trump had initially vowed to block the merger if elected, although, as always, it's hard to know if he will actually follow through on that promise, given his inherent and demonstrable unpredictability. However, telecom investors are expecting the incoming administration to be more friendly toward consolidation in general, along with a lighter regulatory environment. After meeting with Trump's transition team, AT&T executives are confident that the deal will be approved by regulators. If the deal goes through, Ma Bell will become a massive powerhouse -- all while maintaining and solidifying its healthy dividend payout.