Ford Motor Company (NYSE:F) will report its fourth-quarter and full-year 2016 earnings before the bell on Thursday, Jan. 26. Here's a look at what to expect.

Analysts polled by Thomson Reuters expect Ford to report earnings of $0.32 per share for the fourth quarter, on average, on revenue of $35.1 billion. Both numbers would be down from the $0.58 that Ford earned per share on $40.3 billion of revenue in the year-ago quarter.

What happened at Ford during the quarter

Ford's sales numbers in the important U.S. market were just so-so in the fourth quarter. Overall sales were down 2.3%, reflecting a large (20%) drop in Ford-brand car sales -- but sales of the very profitable F-Series pickups (up 4.3%) and Lincoln luxury models (up 14.8%) were both strong, suggesting a good bottom-line result for Ford's North America unit.

Technically, Ford launched its new F-Series Super Duty pickups in the third quarter. But production and sales got up to speed during the fourth, with average transaction prices up significantly from a year ago. That also bodes well for a good profit in North America, though the added costs of the new model could weigh on that result somewhat.

Elsewhere in the world, results were mixed. Sales were up just 0.6% in Europe, but that's not entirely bad -- the last quarter of 2015 was very strong, and Ford continued to see good sales of strongly profitable crossover SUVs and commercial vehicles.

In China, Ford-brand sales rose 17.7% during the quarter as the Blue Oval continued to rebound from a slump earlier in 2016. Again, SUVs are a good story for Ford in China, where it's seeing particular success with a locally built seven-passenger version of the Edge SUV.

The Lincoln brand's sales in China are still small, but growing quickly: Sales of 11,562 vehicles in the quarter represented an increase of 162% from a year ago.

What Ford's guidance tells us about what to expect

Ford's guidance, reiterated by CEO Mark Fields earlier this month, calls for a full-year adjusted pre-tax profit of "about $10.2 billion." Given that Ford earned $8.24 billion on that basis during the first three quarters of 2016, it seems reasonable to expect Ford's adjusted pre-tax profit for the fourth quarter to be in the neighborhood of $1.96 billion. 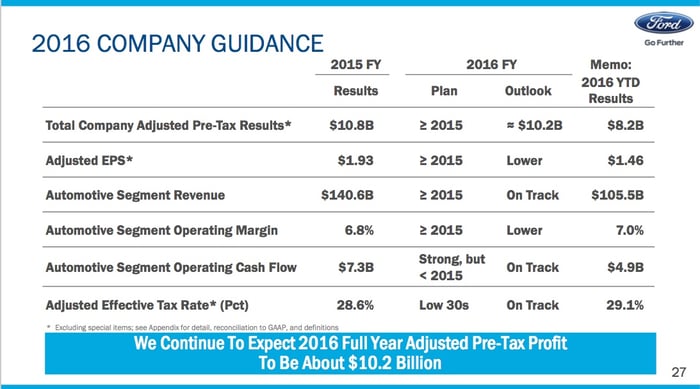 Fields also confirmed that Ford's full-year 2016 automotive revenue (revenue from its core business of building and selling vehicles) will be "equal to or greater than" the $140.6 billion it generated in 2015. Ford generated $105.5 billion in automotive revenue through the first nine months of 2016, implying a fourth-quarter result in the vicinity of $35.1 billion. (Total revenue, including results from Ford's financial-services unit, will likely be somewhat higher.)

I think Ford's results will come in very close to the numbers we extrapolated from its full-year guidance. Fields and CFO Bob Shanks tend to try to give investors accurate expectations, rather than offering lowball guidance the company then goes on to beat. At least as of right now, I don't think it's likely that Ford will surprise us in a big way on Thursday.