In the midst of this volatility, however, shares of Kinross Gold Corporation (NYSE:KGC), a global leader among gold stocks, climbed more than 65%. Let's dig into the company's performance in 2016, and see what we can expect in 2017.

Beginning the year by expanding its portfolio, Kinross Gold announced in early January that it had completed the acquisition of 100% of the Bald Mountain gold mine and 50% of the Round Mountain gold mine from Barrick Gold for $610 million in cash. The company hasn't reported its Q4 earnings for fiscal 2016 yet, but through the first nine months of the year, the company reported gold production of approximately 279,000 ounces at Round Mountain and 86,000 ounces at Bald Mountain. Although gold production at Bald Mountain was lower than expected in the first half of the year because of "short-term integration issues" according to management, the issues have been resolved and the mine is expected to achieve its revised guidance through the second half of the year.

Besides growing its portfolio through acquisitions, the company announced its plan to grow organically by expanding its operations at the Tasiast mine in Mauritania.

The Tasiast mine in Mauritania. Image source: Kinross Gold.

In late March, management revealed that it intends to proceed with Phase One of the expansion. According to the company's press release, "The expansion is forecast to reduce Tasiast's production cost of sales per ounce by an estimated 48% while increasing annual production by an estimated 87% compared with 2015. The company estimates that phase one will reach full commercial production in Q2 2018.

Between the mines in Nevada and the expansion activities at its Mauritanian mine, Kinross Gold ended 2016 with a portfolio a lot stronger than when it began the year. And that sentiment may continue in the year to come.

In Q3 of 2017, the company expects to complete the Tasiast Phase Two feasibility study, leading up to a possible final decision by the end of the year on whether or not to proceed. Potentially, construction activities could begin in early 2018 with full production achieved in 2020. Management estimates that once phases one and two are complete, Tasiast would have an annual average production of 777,000 gold ounces from 2020 through 2026 at all-in sustaining costs of about $665 per gold ounce.

We've looked at what's behind Kinross Gold and what's ahead, so let's turn our attention now to its stock. One thing to remember when evaluating mining companies is that assigning a value to an asset, like a mine, is far from cut and dried; consequently, companies may take large writedowns on their assets, resulting in skewed earnings figures. One thing that can't be massaged, though, is cash flow, so forgoing the traditional price-to-earnings ratio, let's consider the stock in terms of its free cash flow on a trailing-12-month basis. 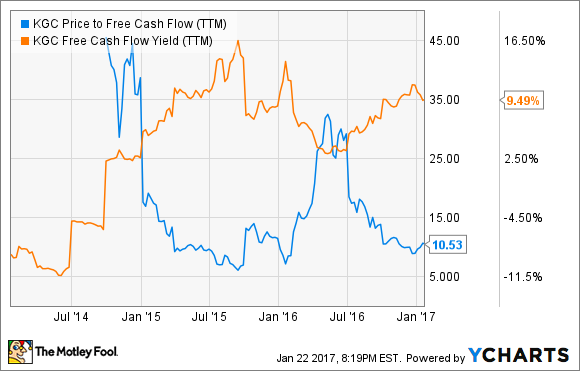 But this means little without some context, so let's let's consider it alongside its peers: Barrick Gold, Goldcorp, Kinross Gold, and Newmont Mining. With a free cash flow yield of 9.49%, Kinross Gold far surpasses the competition. Think you'd have to pay a premium for such an attractive yield? Think again. Among its peers, Kinross Gold trades at a cheaper valuation in terms of free cash flow. 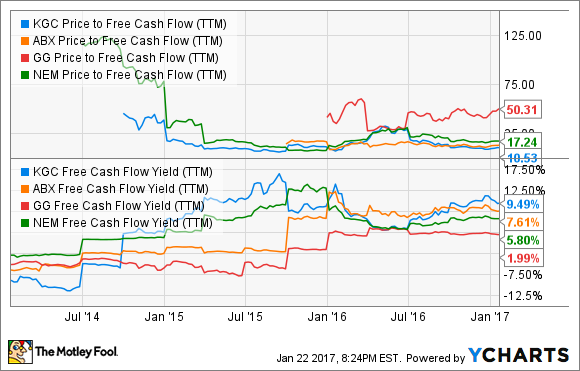 Over the past three years, investors have had to pay a steep price for Kinross Gold's stock, which has traded as high as 45 times free cash flow. But those days are behind it (for the time being). Overall, considering where shares are trading today, the stock seems quite attractively priced.

Shares of Kinross Gold enjoyed quite the ride in 2016, but there's no guarantee that it will continue flying higher through 2017; nonetheless, the company has some exciting prospects on its horizon. And with the stock looking like a bargain, Kinross Gold represents a serious consideration for investors looking to gain exposure to the gold industry.