Compounded with the drop in the price of gold, mixed earnings reports sent several gold mining companies' stocks south in the final days of summer.

Greece (still) is the word

Besides the market price of the yellow metal falling, Eldorado Gold's shareholders responded unfavorably to a mixed second-quarter earnings report. Attributable primarily to the commencement of operations at Olympias and an increase in production at Kisladag, quarterly revenue totaled $153.2 million, an 85% increase over the same period last year. The strong top-line growth, however, didn't translate to the bottom line. Whereas Eldorado reported all-in sustaining costs (AISC) of $846 per gold ounce in Q2 2017, the company reported AISC of $934 per gold ounce in the recently completed quarter. This, in addition to a weakening in the Turkish and Brazilian currencies in relation to the U.S. dollar, led to the company reporting a net loss of $24.4 million compared to the $11.2 million net profit it reported in Q2 2017. 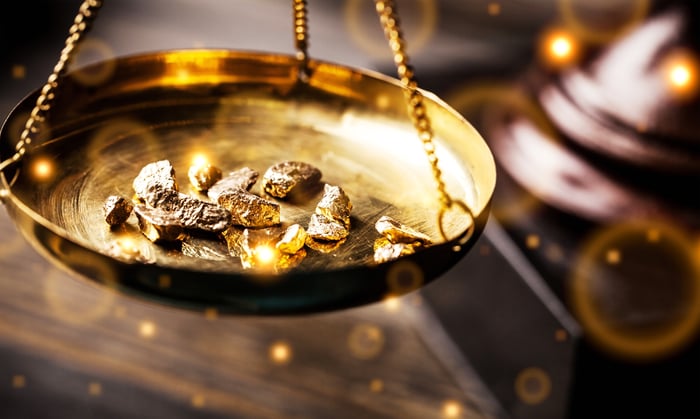 Perhaps most disheartening for Eldorado's investors, though, was the lack of news regarding Skouries in Greece. While the company seemed to be making progress with development of the mine last spring, management seemed less enthusiastic on the company's conference call, stating that it has "been disappointed by the government's failure to act on earlier assurances to address the Skouries permitting issue following the conclusion of the arbitration."

Unfazed by the promise of a glittering future

Despite a year-over-year decline due to lower throughput at Rosebel and Essakane, IAMGOLD reported gold production of 214,000 ounces in the second quarter and reaffirmed its production guidance of 850,000 to 900,000 ounces for 2018. Attempting to paint an even brighter picture of the company's future, management reported favorable results from the pre-feasibility study of the Heap Leach Project at Essakane. According to the study, the Heap Leach Project will increase average annual gold production about 16% to 480,000 ounces. Moreover, the company reported a 39% increase in reserves at the project located in West Africa. 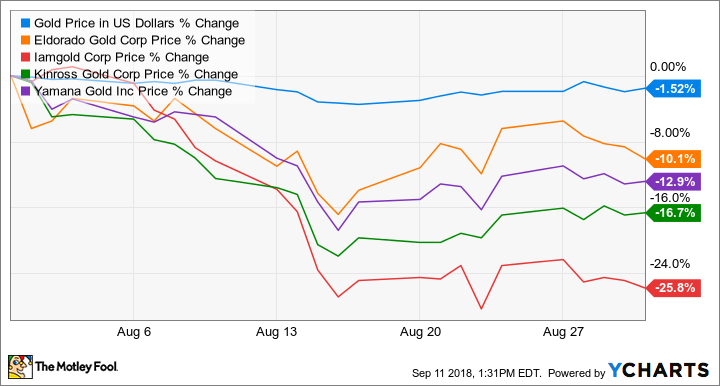 The auspicious findings from the pre-feasibility study, however, weren't enough to distract shareholders from several blemishes on the company's Q2 earnings report. While IAMGOLD revealed a 1% year-over-year increase in revenue, the company posted a net loss of $26.2 million compared to a net profit of $506.5 million during the same period last year. According to management, the decrease in profitability was largely due to the reversals of impairment charges -- about $524 million -- relating to the Cote Gold Project and the Rosebel mine in Q2 2017. Cash flow in the second quarter provided an additional cause for shareholders to worry. Whereas IAMGOLD reported operational cash flow of $86.2 million in Q2 2017, it reported $50.6 million in the recently completed quarter.

For Kinross Gold's shareholders, however, the more pressing concern may have been the company's decision to halt progress on the Phase Two project at the Tasiast mine in Mauritania. With the construction of Phase One complete, the project is now in the final stages of commissioning. Stating in its earnings report the desire to remain "committed to disciplined capital allocation," management has decided to forgo development of Phase Two as it continues "to engage with the Government of Mauritania regarding [its] activities in the country."

Don't be fooled by the drop in this gold miner's stock

Kicking August off on a bright note, Yamana Gold, according to Thefly.com, received an upgrade to outperform from BMO Capital on the last day of July, but even this, in addition to a strong Q2 earnings report, wasn't enough to help the stock escape the fear wrought by the drop in the price of gold.

With the help of commercial production commencing at Cerro Moro, Yamana Gold reported production of 240,271 gold equivalent ounces -- a 7% year-over-year increase -- leading management to estimate that annual 2018 production will exceed the original guidance of 900,000 ounces. Unaffected by factors that compromised its peers' earnings reports, Yamana Gold reported $18 million in net earnings for the quarter compared to a $39.9 million net loss in the same period last year. The company, furthermore, reported growth in operational cash flow (before net change in working capital): $157.5 million in Q2 2018 compared to $122.8 million in Q2 2017.

It comes as no surprise that many gold mining stocks fell in August with the slumping price of the yellow stuff. For Eldorado and Kinross, however, the stocks' declines reflect well-warranted concerns regarding their growth prospects. Consequently, investors would be better served to closely follow developments at Skouries and Phase Two at Tasiast in regards to Eldorado and Kinross, respectively. IAMGOLD's investors, likewise, should monitor the development of the Heap Leach Project at Essakane, while Yamana's investors confirm that Cerro Moro continues to live up to management's high expectations.