With most commentators talking of a pickup in growth in 2017 and post-election euphoria encouraging the belief that a Donald Trump presidency will spur economic growth, it would be reasonable to think that staffing company Robert Half International Inc. (NYSE:RHI) will report some improving conditions. In fact, its fourth-quarter earnings was as lackluster as its third. Let's take a look at what's going on.

The fourth-quarter net service revenue figure represents a decline of 3% from the same period last year and down 1% on a same-day, constant-currency basis. Meanwhile, pre-tax income dropped 13.7%, with net income per share down 14.1%. It wasn't a pretty quarter, and the guidance for the first quarter of 2017 (management only guides one quarter ahead) wasn't much better:

It's a good idea to break out the company's revenue by region and activity. As you can see below, the deterioration in the U.S. has continued throughout 2016, while international growth rates have roughly remained the same.

Of particular note is the relative weakness in U.S. permanent and international permanent hiring. That's relevant because it's seen as more cyclically dependent than temporary hiring. In other words, it's a good bellwether of sentiment among employers. The fourth quarter marked a step down in the U.S., while even Robert Half's U.S. temporary hiring revenue turned negative in the quarter. 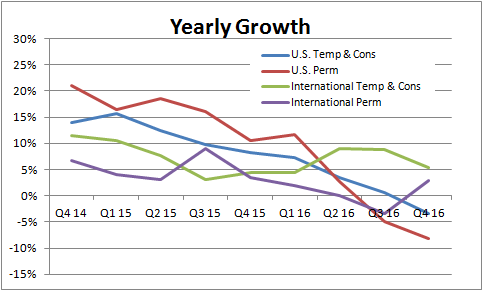 Moreover, commentary on trends within the quarter suggested ongoing weakness. For example, CFO Keith Waddell described how temporary and consulting staffing division revenue was down 2.5% in December compared to a 1.8% decline for the full quarter. Meanwhile, global permanent placement revenue growth rates, in his words, "were fairly consistent throughout the quarter, with December revenues down 4.2% versus a 4.9% decline for the full quarter."

While the numbers and guidance certainly didn't show it, management's commentary suggested that underlying conditions are somewhat better than the numbers suggest. Waddell spoke of client optimism and sentiment being "markedly improved," but they appear to still be in what he called "wait and see and show me" mode. Clients don't appear to have much urgency and continue to be highly selective in their hiring.

As such, Waddell confirmed that the first-quarter guidance "pretty much assumes that the trends [that] existed in the latter part of the fourth quarter continue into the first." In other words, if trends improve and match what anecdotal and business survey data is saying, then Robert Half could surprise in the coming quarter. 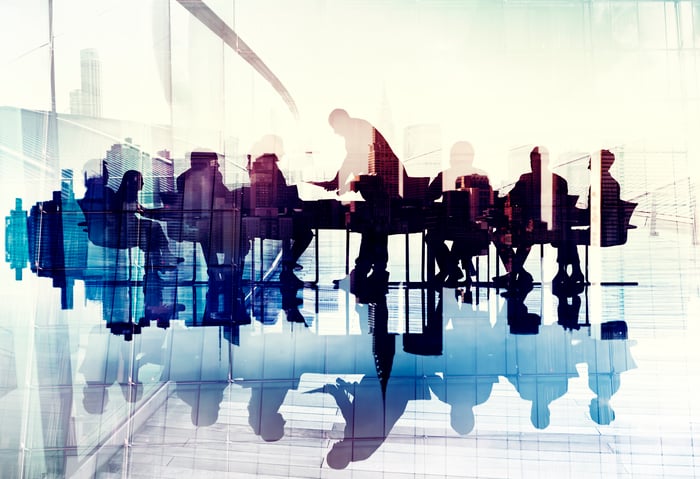 Anyone who thought Robert Half would be an early indicator of a bounce in U.S. gross domestic product would have been disappointed by the results. Sentiment has to turn positive before companies feel obliged to increase permanent hiring on a meaningful basis. While anecdotal evidence is positive, Robert Half hasn't seen it in its earnings. On the other hand, its guidance could turn out to be conservative if employment trends pick up in line with the confidence being expressed in business surveys. It still all remains to be seen in 2017.