Ford Motor Company (NYSE:F) is a vast global operation, but it still makes the majority of its money in North America. That makes the health of Ford's North America business unit particularly important to investors.

Why Ford's wholesale shipments fell in the fourth quarter

Ford's profit in North America dropped $73 million in the fourth quarter from a year ago. That's not a big drop in the context of nearly $2 billion in profits -- only 3.6%. But it's worth a closer look. Also worth a closer look: Wholesale shipments were down by 105,000 units year over year, a 13% drop. That probably explained why revenue and market share were down year over year, as well. 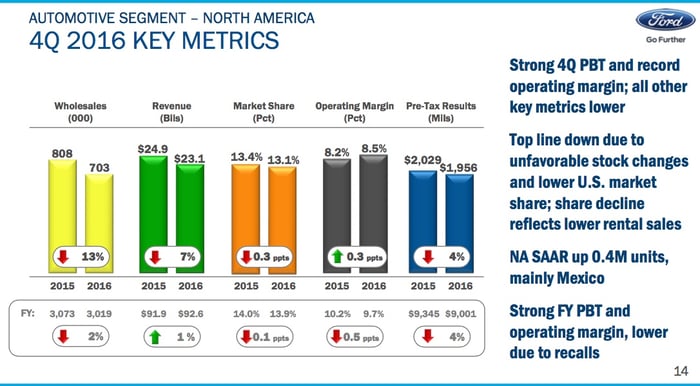 So why the big drop in wholesale shipments?

During Ford's earnings call on Thursday, CFO Bob Shanks said that much of the drop in wholesales was due to Ford's efforts to reduce vehicle inventories in the fourth quarter of 2016 -- and specifically, the contrast between that effort and its push to build inventories while launching the then-new F-150 pickup a year earlier. (Ford had announced in October that it would cut production at four factories in an effort to reduce inventories.)

Shanks also reminded investors that Ford had "front-loaded" its deliveries to rental-car fleets in 2016, making some very big deliveries early in the year. The company was building inventories up in advance of those deliveries in the fourth quarter of 2015, Shanks said.

A look at the records from Ford's monthly sales reports supports Shanks' argument. According to Ford sales analyst Erich Merkle, Ford had about 674,000 vehicles in inventory as of December 31, 2015 versus 647,000 a year later.

Vehicles are counted as "wholesales" (and booked as revenue) when they move into dealer inventories. In late 2015, Ford was pushing vehicles into inventories to build up stock in anticipation of demand for its new pickups and other new products, as well as the big fleet deliveries -- but a year later, it was working to reduce stocks of models for which sales had slowed.

But there was a little more to the story.

The drop in shipments was partially offset by higher profitability

This slide from Ford's earnings presentation sums up the year-over-year change across several categories that contributed to Ford's profit in North America. 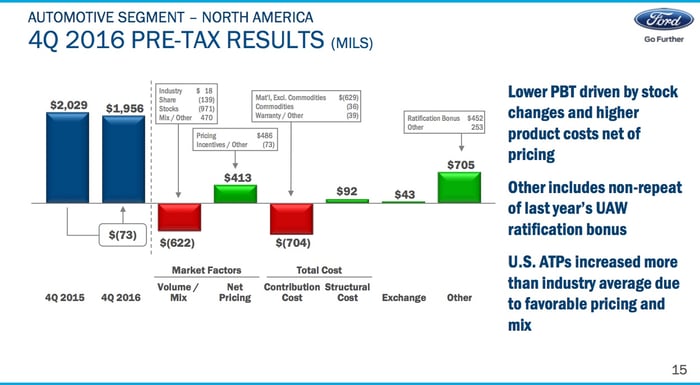 Here's how Shanks explained this slide:

This shows the explanation of the change in North America's results on a year-over-year basis, down $73 million. You can see that it was driven primarily by stock changes and also by higher product costs. If you look at the callout box for contribution costs, you can see 'material excluding commodities.' That is more than explained by higher product costs related to the products that we launched, including the Super Duty -- and earlier in the year, the Fusion, the Escape and also the Continental in the latter part of the year.

On the upside, you can see that Ford realized a year-over-year improvement of $486 million in "pricing." The Blue Oval's average transaction prices were up year over year, thanks to those new and revamped products, especially the all-new Super Duty pickups. That's why its profit dropped only 3.6% while its revenue fell 7% -- its profit margin increased to 8.5% from 8.2% a year ago.

Shanks also noted the item on the far right of the chart: Ford paid out $452 million in bonuses to its UAW-represented workers after they ratified a new four-year contract in 2015. That obviously wasn't repeated in 2016.

The takeaway for investors: Ford is coping well with a market that has probably peaked

Ford is still selling a lot of vehicles in North America, and it's still able to sell them without big discounts. That's good news. But it's important for investors to remember that auto sales are cyclical. At some point, sales will fall and competitive pressure to raise discounts will rise.

That's not happening to a big extent yet. But sales are probably at, or past, their peak for this cycle. They may stay high -- and Ford's profits may stay healthy -- for several more quarters. But the takeaway is this: At this point in the cycle, it's not a surprise and its not bad news to see Ford making moves to trim inventories -- especially when the alternative might have been to crank up discounts.