Ford Motor Company (NYSE:F) had a good year in 2016. The Blue Oval posted a healthy $10.4 billion pre-tax profit for the year, its second-best ever.

But within that result, there were some reasons for concern. One big concern: the 10% year-over-year decline in pre-tax profit at Ford Credit, the company's in-house financing unit.

Here is Ford's explanation of what happened at its credit arm in 2016, and what the company says we should expect looking ahead in 2017.

A look at Ford Credit's fourth-quarter result tells the story of what happened to it in 2016 and gives a strong hint as to what will likely happen in 2017.

The good news is that receivables were up, signs of a growing business. But despite the growth, Ford Credit's pre-tax profits fell 28% from the fourth quarter of 2015. Less worrisome, but still noteworthy: Delinquencies rose slightly. 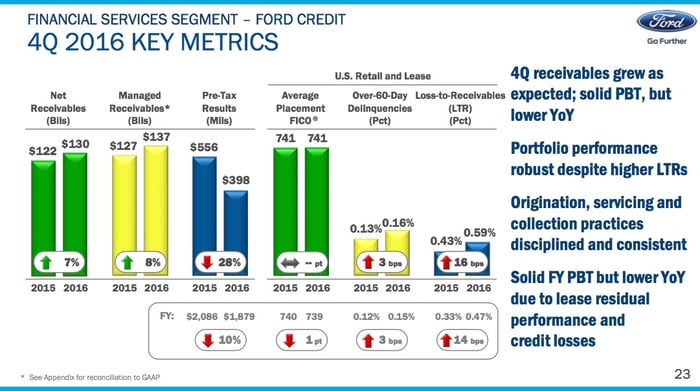 During Ford's earnings call on Thursday, CFO Bob Shanks noted that Ford Credit's delinquencies are still quite low by historical standards, and that overall, the loan portfolio is performing well:

In terms of U.S. retail and lease metrics, the [loan] portfolio performance continues to be robust. All of our origination servicing and collection practices continue to be consistent. So we are seeing delinquencies start to increase. They've been increasing and are approaching historical levels but are not there yet. The same is true for our loss-to-receivables. We are starting to get closer to the historical performance of the past.

Rising delinquencies aren't the reason for the drop in profit. So what is? The next slide in Ford's presentation gave a clue. 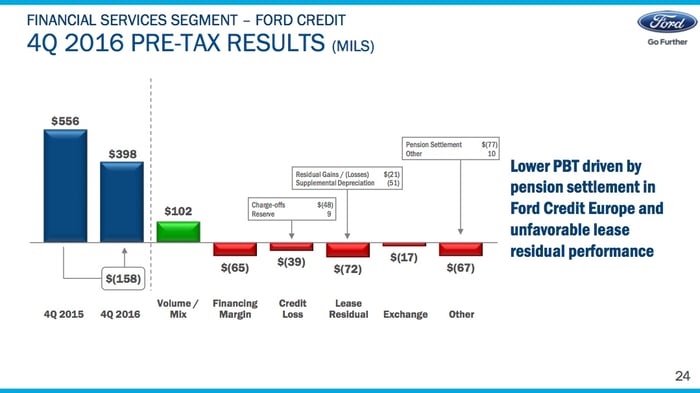 This slide shows how Ford Credit's fourth-quarter result compared with its year-ago result in several key areas. Obviously, the biggest thing to note is that pre-tax profit fell by $158 million, or 28%. But beyond that, Shanks pointed to two items:

If you first go to the far right, we had a pension settlement that occurred between Ford Credit and Ford of Europe. There's actually a positive offset to this to the dollar and the European results. And this is basically just simply -- we had a Ford plan in the past. We've split the expense and all the results of that plan between Ford Credit and [Ford] Europe, we've done that in other regions as well. But what we've done is we've chosen to have Ford Credit settle its share of the deficit at this point in time. It will continue to report no ongoing service costs, but we're going to put all of the balance now of the risk and rewards on the portfolio to [Ford Europe, the automotive business unit], who will manage it going forward. And we've already done that in other parts of the business over the last number of years.

That was a $77 million hit, but it was a one-time item. The second factor Shanks pointed to is the one that will be a recurring theme in 2017: "If you look at the middle factor around lease residuals, you can see there the same thing that we've seen all quarters of this year, the impacts of lower auction value on the business."

Simply put, used-car values are falling. That means that the nice late-model used Fords and LIncolns that Ford Credit takes back and sells at auction when their leases are up are worth less than they had been. That's hurting Ford Credit's bottom line. 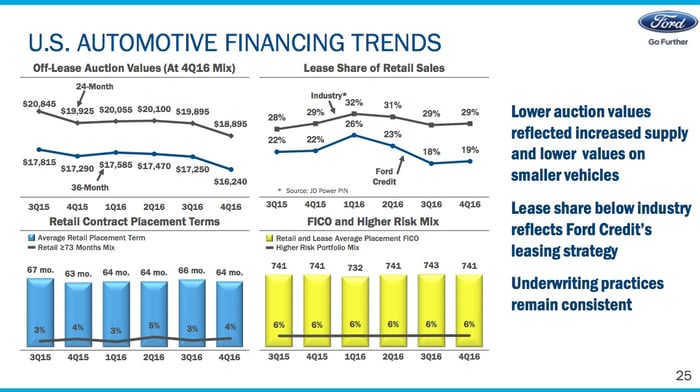 As Shanks explained, the chart on the upper left of this slide shows the trend in used-car values -- specifically, the average auction values of 24-month-old and 36-month-old vehicles.

If you go to the next slide, Slide 25, at the upper left, and focus on the 36-month line, which is the one that's below. You can see that we had pretty stable performance actually, up from the fourth quarter [of 2015] in the first, second and third quarters. We had a 6% decline, or $1,060, in the fourth quarter. That was largely in September and October. Knock on wood, in November, December and so far, we've actually seen much more stable performance in auction values, although we are projecting auction values to be down in 2017. And that's continued in our guidance. [Emphasis added.]

Leasing has been an important driver of sales growth for the U.S. auto industry over the last few years. But Shanks explained that Ford Credit is now working to reduce its leasing as a percentage of Ford's retail sales.

We actually have had a strategy to take down our lease penetration at Ford Credit. This is in response to higher incentives, which is making leasing very expensive as well as lower auction values in recognition of all the units coming back to market. So you can see that we're starting to separate a bit from the overall industry. And in fact, on a full year basis, which you don't see here, we leased at 22%, which is actually unchanged from 2015. The industry was at 30%. That was actually up 2 points from 2015.

Lastly, Shanks noted the charts at the bottom of the slide, showing that Ford Credit's loan terms and borrower FICO scores have been pretty consistent over the last year and a half.

So what should we expect from Ford Credit in 2017?

For the full year in 2016, Ford Credit earned just under $1.9 billion before taxes, down about 10% from the $2.1 billion it earned in 2015. As Shanks explained, falling used-car values had a lot to do with that decline.

Ford Credit's 2017 guidance assumes that the decline in used-car values will continue. Because of that expectation, it expects that its full-year pre-tax profit will be lower in 2017, probably in the neighborhood of $1.5 billion.