Investors should be thrilled with Amazon’s recent decision to launch a logistics and fulfillment platform.

It's anchors aweigh for Amazon.com (AMZN -5.14%), and investors should be cheering the e-commerce giant's latest move.

Amazon recently passed a major milestone in its continued effort to disrupt the global shipping and logistics industry, long dominated by partners including FedEx (FDX -0.16%), UPS (UPS -1.04%), and numerous others. Equally important, this achievement illustrates why many, myself included, believe Amazon's best days lie ahead of it, despite a lofty market capitalization already in the hundreds of billions of dollars.

According to a number of credible reports, Amazon recently began operating as a "global freight forwarder and logistics provider," pushing the e-commerce giant into a new line of business. This doesn't mean Amazon owns or rents any seagoing vessels (yet). Rather, it acts as the liaison that helps manufacturers book space on freight ships and move products between ports and warehouses. 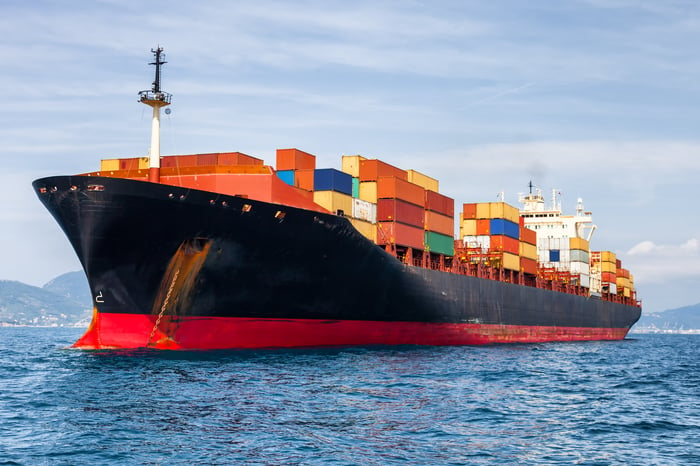 The e-commerce giant is currently doing so under the name of one of its Chinese subsidiaries, and Amazon has reportedly provided this service for at least 150 cargo containers thus far. This small figure is too small to be viewed even as a rounding error for the global shipping industry -- the Port of Los Angeles alone processed about 800,000 containers in December 2016 alone, for example -- but the move represents an important symbolic achievement for Amazon. It marks just the latest step in Amazon's apparent long-term ambition to create some type of global logistics and delivery platform.

Recall that early last year, Amazon signed a deal to lease 20 Boeing 767s as part of its partnership with Air Transport Services Group, an agreement that also saw Amazon make a minority investment in the company as well. This move served as the opening salvo in a new chapter that pits Amazon directly against many longtime partners, such as UPS and FedEx, to name a few. Such a seemingly far-flung tactic might seem like something of a distraction to outside observers, but investors should love this latest news -- and the broader storyline -- for a number of reasons.

It's quite likely that the financial opportunity alone makes this service an attractive idea for Amazon. All told, the global shipping and logistics business could be worth $400 billion, according to one research analyst. At the same time, though, this story is also worth noting because it reflects Amazon's unique ability to transform parts of its cost structure into new revenue streams.

Retail is an infamously low-margin business, and consumers typically favor the company that offers the lowest prices for undifferentiated goods -- people don't care from whom they buy their batteries. To gain market share, then, Amazon has been forced to find ways to continually charge less than its competition for the goods it sells. This constant search for ways to lower prices, in turn, has forced Amazon to find ways to lower its own cost structure to make its business model sustainable.

To so do, Amazon has been remarkably aggressive in creating new services from the core competencies it has gained. Among some noteworthy examples are its Amazon Web Services cloud-computing platform and its Fulfillment by Amazon service. Each of these services allows Amazon to generate additional revenue by using its own infrastructure and intellectual capital to help solve similar problems at other companies.

By turning its attention to global logistics and related services, Amazon seemingly hopes to shave even more from its own burgeoning shipping and fulfillment bills. According to its most recent annual report (2015), fulfillment costs were Amazon's largest operating cost, accounting for 12.5% of total revenue. Fulfillment costs as a percentage of sales had also increased in each of the past two years. Scaling this new service could lead to billions in cost savings for Amazon, which would allow it to lower prices in its e-commerce business in a virtuous cycle that benefits customers and shareholders alike over the long term.

Of course, disrupting a global industry as large as logistics and fulfillment will take years, and there are any number of reasons Amazon's vision might not come to fruition. As a potential boon to its sales growth strategy and as an interesting case study in terms of its broader business philosophy, this is indeed a storyline worth watching as it continues to play out in the years to come.