Video-game stocks have seen a lot of growth lately, but the gaming industry could still give publicly traded gaming companies such as Electronic Arts (NASDAQ:EA), Activision Blizzard (NASDAQ:ATVI), and Take-Two Interactive (NASDAQ:TTWO) even more room to run. With the growth of online gaming, mobile gaming, and new hardware and software that's preparing a tech overhaul for this industry, here's why EA and these other companies could be some of the best video-game stocks now.

The gaming industry itself looks to be continuing to grow nicely, up to $91 billion in 2016, according to analysts at SuperData, and is expected to continue growing in the years to come. There are multiple growth drivers pushing the market up, one of which is the growth in online gaming, not only via computers but also gaming consoles seamlessly connected to the internet. 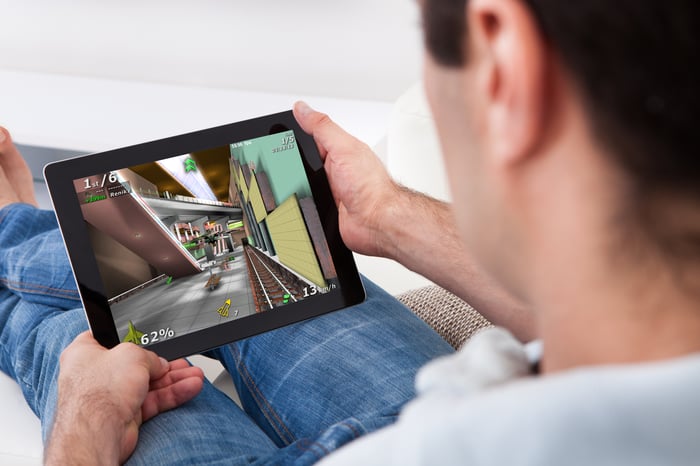 The behemoths in this space, Activision and EA, continue to look like two of the best gaming stocks, as they consistently put out top content and pivot toward the future of video games. The rise of online gaming and internet-connect consoles has helped traditional console gaming content makers such as Activision and EA to sell more games that can be downloaded digitally, and also help to push more in-game purchases.

Activision shares jumped nearly 20% the day after 2016 full-year earnings were announced on Feb. 10, when the company reported sales up 42% in 2016 year over year. The company also announced plans to use its excess cash to buy back $1 billion in stock over the next two years. With rising total monthly active users, as well as increased user engagement and monetization from its top-performing franchises, the company looks to have plenty of room to run from here.

EA has also been a top content creator in the industry with its highly successful FIFA, Star Wars, and Battlefield franchises. EA is one of the most important players in the growing e-sports segment, which could be a major growth driver with its already popular games. While EA's sales haven't been growing as quickly as Activision's -- EA's sales rose 7.4% for the first nine months of 2016 year over year -- it still looks to be on a long-term growth trajectory with rising earnings, up 56% during that same time. The stock also looks cheaper by price to earnings than most of its competitors.

Speaking of reasonable valuation for plenty of expected growth ahead, another gaming stock that looks especially interesting now is NetEase (NASDAQ:NTES). This Chinese internet media company, among many other offerings, gives users online games both of its own and through distribution partnerships with companies such as Activision. NetEase has released many new games in 2016, helping its sales continue to grow nicely as a result, and the company said it would continue its drumbeat of new games in 2017. Even with rising sales and earnings, both of which rose by double digits in the most recent quarter year over year, the stock looks cheap now at just 18 times forward earnings.

Another growth driver for the gaming industry has been the rise in mobile gaming, particularly with low-feature games that drive huge initial demand, as well as increasingly sophisticated games with more storylines and longer-term engagement. Not every company fighting for the mobile-game market has done well lately, but one standout in this space is Take-Two Interactive. The company recently acquired Social Point, a free-to-play mobile game developer, which should help Take-Two continue growing in this space.

Take-Two also upped its own game in e-sports with a new partnership with the NBA as part of Take-Two's NBA2K e-league game. Take-Two's earnings have yet to catch up to the company's growing stock price as a result of its investments in new growth, hence the seemingly absurdly high price-to-earnings ratio, but the stock's forward price-to-earnings ratio of 21 looks reasonable.

Nintendo (OTC:NTDOY) is another interesting gaming company, and one that made a big splash throughout 2016 following the release of game developer Niantic Inc.'s Pokemon Go in partnership with Nintendo. The augmented-reality game took the world by storm, getting over half a billion downloads in the first few months on the market.

The following release of Nintendo's Super Mario Run mobile game was less well received, and the company missed sales and earnings estimates in its most recent quarter, but Nintendo hopes to continue making headlines with its new console, called Switch, that comes out in early 2017. Nintendo's stock does look expensive now for its limited recent history of consistent hits, but the company still has a lot of intellectual-property assets, and its more aggressive mobile strategy could make for more big hits in the near future.

The gaming industry is not only growing but also constantly evolving, and there are many players in this space set to benefit both directly and indirectly -- such as computer companies that make consoles, and chip companies that power the technological growth of this space. The future of gaming looks rosy and these look like some of the best gaming stocks you could own now.