What happened at TrueCar during the fourth quarter

With revenue, vehicles purchased through the service, and TrueCar's number of dealer partners all up solidly from a year ago, the company's fourth-quarter results continued to show the success of the overhaul initiated by CEO Chip Perry after his arrival near the end of 2015.

Significantly, Perry revamped TrueCar's approach to its relationships with dealers, which had been contentious and difficult in the past. Those relationships improved throughout 2016. TrueCar ended the year with 11,151 "franchise dealers" in its network, up 23% from a year ago and its highest mark ever. ("Franchise dealers" are dealerships that sell one or more brands of new vehicles. TrueCar distinguishes them from its "Independent dealers," which typically sell only used vehicles.) 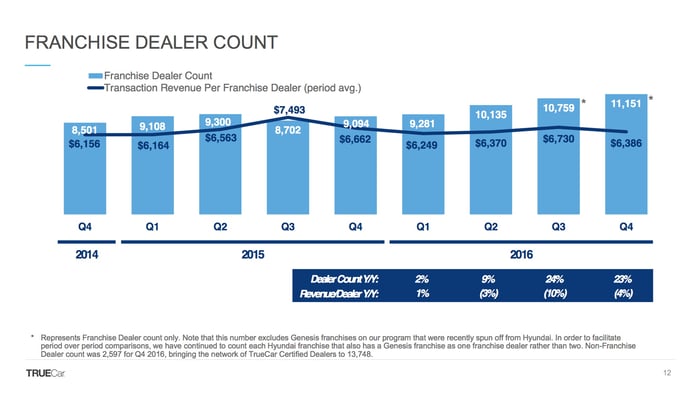 TrueCar's service matches car-shoppers with dealers that have agreed to offer a guaranteed price. Customers using TrueCar's service purchased 218,807 vehicles in the fourth quarter of 2016, down slightly from the company's third-quarter record, but up 19% from a year ago. 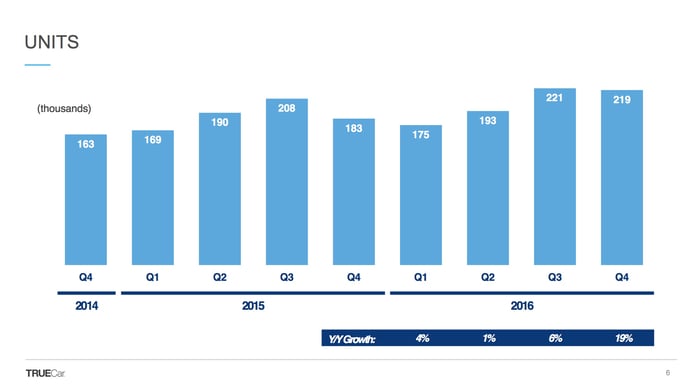 That 19% increase translated into a 18% year-over-year jump in revenue and adjusted earnings before interest, taxes, depreciation, and amortization (adjusted EBITDA) of $5.8 million, a huge improvement from a year ago. 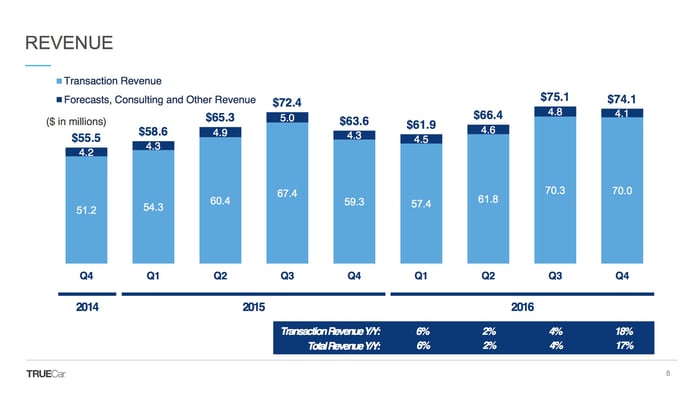 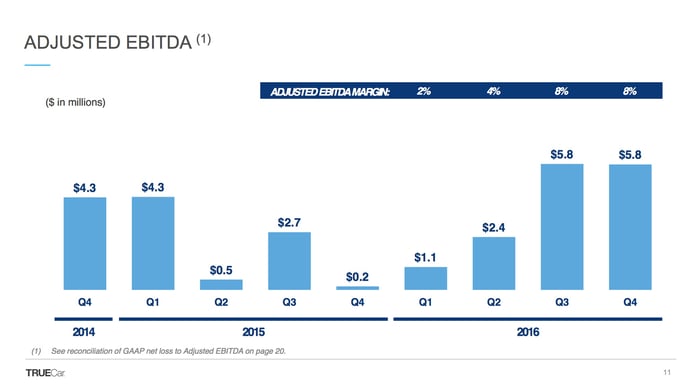 What TrueCar's CEO said about the changes made in 2016

During TrueCar's earnings call, Perry recapped the changes he made to TrueCar's business over the course of 2016.

When I joined the Company, we were facing three major challenges. First, we had negative sentiment with the broader dealer community in general, and specifically with many of our important dealer customers. Second, we were not innovating our product quickly enough, against unmet consumer and dealer need, and thus were not generating conversion improvement. And finally, we had some internal operational challenges that limited our ability to scale the business.

As a result, year-over-year revenue growth was decelerating, bottoming out in Q2 of 2016, at only 2%. We focused on four key levers to address these issues, and to get the business growing again. First, we launched our dealer pledge, which included significant changes to our product, advertising messages, and business practices. As a result, we were able to win back AutoNation, and attract over 2,000 other high-quality dealers to the TrueCar platform.

Second, we overhauled our dealer organization, in order to improve the level of service, and training that we provide to our dealer customers. Over the course of 2016, we added over 100 people to our field team. Third, we shifted our new car product focus, to focus on vehicle-specific pricing offers known as VIN-based pricing, where consumers get real prices on actual cars. And we improved the messaging on our site, to make the benefits of registration more clear to consumers.

And finally, we improved the internal operations of the Company, especially in our technology group, as we embarked on a major replatforming project, and in our planning and internal reporting function, to functional alignment and coordination across the business. In short, we began to put in place the technologies, people, and processes that will enable us to scale TrueCar.

The net effect of this work is clearly improving operational metrics and financial performance, and we are experiencing a new-found momentum in the marketplace. We are nowhere close to declaring victory, but we exited 2017 with significant velocity.

Perry's vision for the next phase of TrueCar's expansion

Perry said  TrueCar's next challenge will be to expand its offering to improve the car-buying experience from end to end -- from the buyer's initial engagement with TrueCar's online tools, to the final experience closing the deal at the dealership.

He identified four factors that will be key to implementing that vision:

Perry noted that according to a recent J.D. Power study of new-vehicle shoppers, nearly 60% of people using the internet to shop for a car visit TrueCar or one of its partner sites. Perry's goal is to capture as many of those visitors as possible and ensure that they receive a complete, positive experience -- while also ensuring that TrueCar is delivering value to its dealer partners.

TrueCar's guidance for the first quarter and full year

TrueCar's guidance for the first quarter of 2017:

For the full year, TrueCar's current guidance is as follows: