TrueCar had a tumultuous 2015 that saw the departure of its founder, several key executives, and an important dealer partner. A new CEO is working to right the ship, but the company closed 2015 with a big net loss.

Online car-shopping service TrueCar (TRUE -1.31%) reported late on Feb. 18 that it lost $27.4 million in the fourth quarter, nearly triple its $9.8 million loss a year ago.

Here's what shareholders need to know.

What happened with TrueCar during the quarter?
The fourth quarter capped a tumultuous 2015 for TrueCar, one that saw major turnover among its car-dealer partners and in its executive suite.

Not all of those events happened in the fourth quarter. But they had an effect on TrueCar's bottom line during the period.

Giant dealer group AutoNation (AN 0.99%) ended its relationship with TrueCar during the third quarter, leaving the service with 8,702 franchised dealers. By the end of the fourth quarter, that number had risen 4.5% to 9,094, close to what it had been before the AutoNation dealer group's departure.

But CFO Mike Guthrie said during the conference call that a disproportionate number of those new-to-TrueCar dealers were lower-volume dealerships than the dealers they replaced. That showed up in the average transaction revenue per dealer, which fell 11% from third-quarter levels to $6,662. 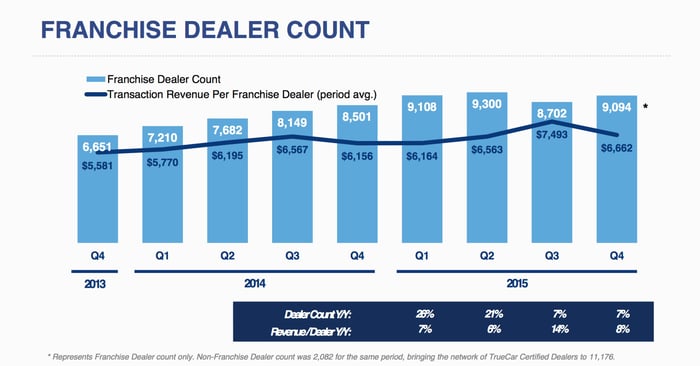 New CEO Chip Perry has begun working to get TrueCar back on track. But key growth metrics in the fourth quarter were thinner than in the recent past: Units sold (meaning vehicles purchased with TrueCar's help) grew 12% year over year, but that was much lower than the 21%, 27%, and 34% year-over-year gains seen in the prior three quarters. Revenue growth slowed similarly.

What TrueCar's management had to say
The gist of Perry's presentation to investors had, understandably, less to do with 2015 results than it did with the new CEO's plans for TrueCar going forward.

Perry emphasized that despite the turmoil of 2015, he believes that TrueCar still has substantial business strengths, and its brand is very strong with consumers. The challenges that TrueCar faced in 2015 "are the result of some shortcomings in the ways in which the company executed its business model in the past, not the fundamentals of the model itself," he said during the earnings presentation.

Perry thinks the company needs to address three "shortcomings" in 2016. "Our first and highest priority will be to turn around the negative sentiment that some dealers feel today toward TrueCar," Perry said. "Immediately after I took the helm, I began an active outreach to hear directly from our dealer customers, what they like and don't like about our Company. They've given me an earful of very helpful input, which I really appreciate."

His second priority will be to improve TrueCar's relationships with automakers ("OEMs," in the industry lingo). "It is important to us that the OEMs see TrueCar as a useful marketing channel, because they are very influential with our dealers," he said. "We have some excellent products that can help them improve the efficiency of their more than $50 billion in annual spending on sales incentives. This process will take some time, and the most important thing we can do in this respect is to win over more of the dealers."

Lastly, Perry wants TrueCar to monetize the 5.1 million new-car shoppers that use TrueCar's network annually at a higher rate than the 11% it managed in 2015. "Clearly, we are not giving our new car buyer audience sufficient reasons to see through our experience, connect with our dealer network and purchase a car from a TrueCar certified dealer," he said. "In 2016, we'll be investing in product and technology in order to evolve our user experience in a way that enables us over time to dramatically improve our yield."

For both periods, the company expects to roughly break even on an adjusted-EBITDA basis, which likely means significant net losses for the quarter and for the full year.