Please ensure Javascript is enabled for purposes of website accessibility
Log In Help Join The Motley Fool
Free Article Join Over 1 Million Premium Members And Get More In-Depth Stock Guidance and Research
By Jim Crumly - Feb 20, 2017 at 10:02AM

Corbus Pharmaceuticals was one of the market's top performers in 2016. Will 2017 be more of the same?

Investors have been scanning the market looking for stocks that could benefit from the wave of interest in companies that were in any way related to the budding marijuana industry. Tiny biotech Corbus Pharmaceuticals (CRBP 1.05%) has a single drug that is not actually derived from the plant, but its shareholders got quite the buzz in 2016. Despite an outstanding 2016 lift, this stock is a long shot to repeat that performance any time soon. 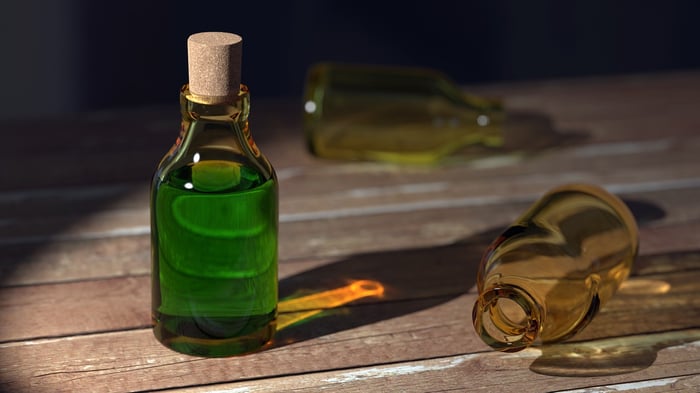 Switching off the body's inflammation response

Corbus Pharmaceuticals is a clinical stage biotech that is developing a drug with a novel approach to treating diseases of inflammation and fibrosis. Patients with inflammatory diseases have an inflammation response that has gone out of control and doesn't resolve properly. Drugs on the market today that combat these conditions do so by countering the body's inflammation response, but the downside to this approach is that these drugs also suppress the immune system, as inflammation is part of the body's natural response to infection or injury. Long-term use of these therapies can cause very serious susceptibility to disease and tumors. The approach that Corbus is taking actually strengthens the immune system and helps it move to the resolution phase.

The drug that Corbus is developing, Resunab, is a synthetic chemical that mimics a metabolite that the body produces from the main active ingredient of marijuana, THC, but is not psychoactive. Resunab attaches to the CB2 cannabinoid receptors that are found in the immune cells of the body and activates a pathway that controls the resolution of inflammation. This natural "off" switch for inflammation causes the body to bring inflammation down itself without compromising its ability to fight whatever triggered the immune response in the first place.

If the approach works, the implications will be massive. A number of diseases involve an imbalance between the "on" and "off" switches of the immune system that result in an inability to resolve inflammation. The first phase 2 trial that produced efficacy results tested Resunab on patients with systematic sclerosis, a rare auto-immune disease that affects 90,000 patients in the U.S. and Europe, which has 40% to 60% mortality within 10 years and for which there is no FDA-approved treatment. But the drug is also being tested against dermatomyositis, cystic fibrosis, and systemic lupus erythematosus. Lupus would be the biggest prize, with 500,000 patients in the U.S. and Europe.

Corbus stock had some sizable tailwinds in 2016. A heightened interest in marijuana stocks among investors propelled the entire category forward, sometimes seemingly without regard to actual company prospects (particularly seeing as how Corbus has nothing to do with the marijuana plant). During the year, the company received grants from the Cystic Fibrosis Foundation and the National Institutes of Health, lending some serious credibility to Resunab. The FDA also gave Corbus a vote of confidence by granting the company an Open Label Extension, which allows Corbus to provide trial participants with Resunab for 12 months after the trials complete. And starting last summer, insiders went on a company stock buying spree, scoring almost a million dollar's worth by year's end.

The best news of the year came in mid-November when data came back from the systematic sclerosis trial and provided investors with the first solid data on efficacy. Despite the fact that the test was mainly aimed at evaluating safety and identifying clinical benefits of the drug, results came back showing a statistically significant improvement in patients' health as compared to the placebo group. The stock soared over 50% in one day.

But success is still uncertain and far off

Resunab is far from proven at this point. The phase 2 trial returned a positive result with a p-value of .044, where a value below .05 is generally considered significant. In other words, the results barely met the statistical threshold. That doesn't mean that the drug barely worked; the trial was just too small to give greater confidence, and up to now the only evidence that the drug would work came from animal studies and observations from pre-clinical studies. Further, the molecule was developed in the 1990's and has a history of failure. Two other companies attempted to develop the drug as a pain medication and gave up on it despite promising early trial results.

Corbus has a long road ahead of it before it can commercialize Resunab. A study by a biotech trade association puts the average probability of a drug progressing from phase two to drug approval at around 15%. The odds might be better for Resunab given the encouraging results so far, but given that the company is betting its entire future on this single molecule, risk-averse investors should be wary. And commercialization is still years away, even assuming the drug proves out. The company expects approval for the systemic sclerosis indication in 2019, cystic fibrosis in 2021, and lupus in 2023. A lot can happen in the meantime, especially since competitors like Vertex Pharmaceuticals in cystic fibrosis are not standing still. The company is burning through cash at a rate of about $3 million per quarter and had a $19 million cash balance as of September 2016.

Corbus may get a boost when results from its phase 2 trial for cystic fibrosis come out later this quarter... if they are positive. But, with major swelling in the stock price last year and with uncertain profits still years away, all but the most speculative investors should probably take a pass for now.