The potential for ozanimod to reshape multiple sclerosis may be worth billions of dollars in annual sales.

Celgene (CELG) recently reported that its multiple sclerosis drug, ozanimod, successfully met its endpoints in reducing multiple sclerosis (MS) relapses, and assuming a second trial pans out similarly, that's got the biotech targeting a filing for FDA approval by the end of this year. The potential launch of ozanimod into what's arguably one of the most competitive indications might have you wondering what makes ozanimod special enough to become a blockbuster. The answer is simple: safety.

A big and evolving market

The market for MS treatment is big. There are 400,000 cases of MS in the United States and 2.5 million cases of it worldwide, and because MS patients take medication throughout their lifetime, the MS market is worth $19 billion per year -- and growing. 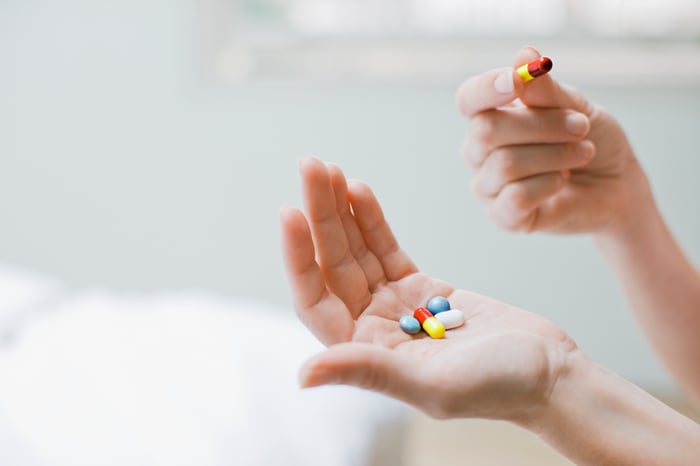 A number of big companies are already well established in the indication. Teva Pharmaceutical Industries' Copaxone is one of the most commonly prescribed medications, with sales of $4 billion. Biogen (BIIB -1.35%) is the overall market share leader, with a variety of drugs combining to control one-third of total MS market share.

Celgene's ozanimod is a selective S1P targeting drug that reduces MS relapses by sequestering lymphocytes so that they don't respond to inflammation.

If approved, ozanimod will join Gilenya as the second S1P drug to get the FDA's green light. However, ozanimod differs in key ways from Gilenya that could allow it to win Gilenya's market share.

Gilenya is a non-selective S1P drug, but ozanimod specifically interacts only with S1P1 and S1P5. That increased selectivity is important, because its appears to make ozanimod safer than Gilenya. Gilenya patients are exposed to cardiovascular risks and kidney toxicity, but those risks weren't identified in ozanimod's phase 2 study, and Celgene's management said that ozanimod's phase 3 safety results were similar to phase 2.

Doctors may also favor ozanimod because its shorter half life provides them with greater flexibility. Lymphocytes recover in only three days after stopping ozanimod, but it can take up to two months for that to happen with Gilenya.

Celgene will release more detailed results from ozanimod's trial at an upcoming conference, but on the surface, it appears that Celgene could be the proud owner of the safest MS drug on the market.

If so, then ozanimod may have little trouble delivering on industry watchers' peak sales estimates of $1 billion to $2 billion in MS. Personally, I think ozanimod sales could be even bigger than that, depending on the final safety data and the FDA prescribing label. If the label is particularly good, then ozanimod may brush off the risk to peak sales posed by Gilenya generics. Because Gilenya's patents are expiring soon, cheaper alternatives could become available as soon as 2019.

Ultimately, a lot of ozanimod's success will depend on whether its safety advantage is great enough to justify its cost. But, ozanimod's upside isn't limited to MS, and trial results in ulcerative colitis and Crohn's disease could significantly expand ozanimod's addressable market. The potential to treat multiple indications is a big reason why Celgene's management says it thinks ozanimod sales could eclipse $4 billion someday. That may sound unattainable, but with safety results this good, it may not be out of reach.