In the defense contracting world, "$15 million" hardly even qualifies as a big number when it's awarded as a military contract. And for an acquisition? $15 million is nothing. A rounding error.

And yet, Aerojet Rocketdyne (NYSE:AJRD) just announced that it has inked a deal to buy an entire business -- Coleman Aerospace, which makes suborbital launch vehicles and payloads for L3 Technologies (NYSE:LLL) -- for a mere $15 million. 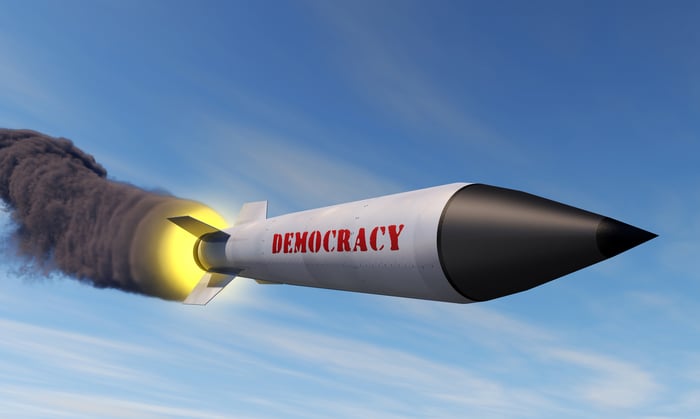 Aerojet Rocketdyne's arsenal of democracy is about to get even bigger. Image source: Getty Images.

As Aerojet explained in a press release issued Wednesday, it is buying Coleman from L3 (the company that up until December 2016 was known as "L-3 Communications") primarily to bolster its "range of products and services to the defense and space markets." Coleman "develops and integrates air- and ground-launched ballistic missile targets ... for the U.S. Missile Defense Agency." The company also conducts hypersonic testing for the U.S. Air Force Research Laboratory, which is actively trying to develop hypersonic (high Mach-speed) aircraft, and hypersonic weapons systems as well.

In buying Coleman, Aerojet Rocketdyne hopes to "[expand] its product portfolio to include vehicle integration for small-, medium-, and intermediate-range ballistic missile targets and other small launch vehicles." It's also likely to give a healthy boost to Aerojet's top and bottom lines.

Aerojet Rocketdyne is only paying $15 million to acquire Coleman, you see, but the division is expected to generate $40 million in sales this year. That works out to a 0.38 price-to-sales ratio that Aerojet is paying for the business, a valuation even cheaper than Aerojet's own 0.81 valuation -- and a much cheaper valuation than L3's own 1.23 P/S ratio.

Additionally, the $40 million in annual revenue coming onboard with Coleman promises to immediately grow Aerojet's top line by 2.3%. Right off the bat, that puts more than half the revenue growth that analysts had been hoping to see at Aerojet this year in the bag. (Incidentally, the deal will make it just a little bit harder for L3 to hit its revenue target of $10.8 billion this year.)

Profits-wise, on the bottom line, Coleman belongs (for now) to L3's Aerospace Systems division, which last year earned operating profit margins of 6.8%. That may not sound like much, but it's twice the level of operating profitability that Aerojet Rocketdyne currently gets from its own Aerospace and Defense business (3%).

So what is the upshot here for investors? Believe it or not, Aerojet Rocketdyne just managed to pay a P/S half of its own to acquire a business that's probably twice as profitable. To me, that makes Aerojet's purchase of Coleman a steal of a deal.