Air Methods (NASDAQ:AIRM) disappointed investors the last time it reported quarterly results. But since then, shares have soared more than 35%.

The company, specializing in medical transportation by air, announced its fourth-quarter and full-year 2016 results after the market closed on Tuesday. How did things look for Air Methods? Here are the highlights. 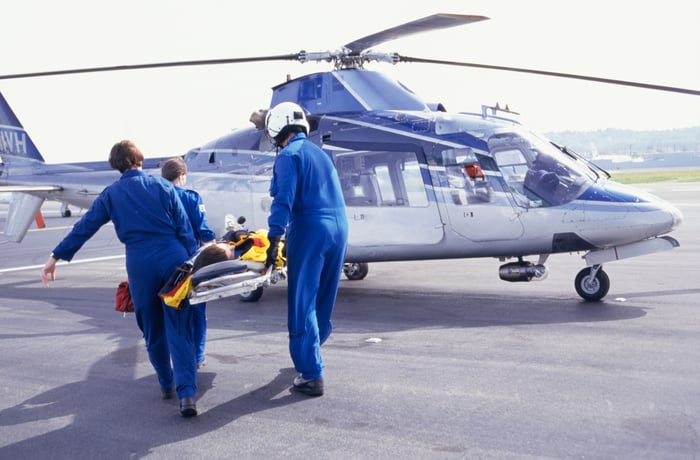 What happened with Air Methods this quarter?

Air Methods' largest business segment, Air Medical Services (AMS), experienced a solid fourth quarter, as revenue jumped 11.4% year over year to $262.9 million. Even with the acquisition of Tri-State Care Flight excluded, revenue for the segment increased 7.1% over the prior-year period.

The company's AMS business was helped by higher transports in the fourth quarter of 2016 than in the same period in 2015. Net revenue per transport also increased year over year, helped in part by lower fuel costs. However, overall maintenance expense growth caused Air Methods' earnings to fall from the prior-year period.

Tourism revenue increased 2.5% year over year to $29.6 million during the fourth quarter. Although total passenger volume fell slightly, total revenue per passenger increased from the prior-year period. Two key factors helped improve total revenue per passenger: an 18.1% year-over-year reduction in the maintenance cost per flight hour, and a 4.1% year-over-year decrease in the fuel cost per flight hour.

The worst-performing segment was again United Rotorcraft. Fourth-quarter revenue for the aeromedical and aerospace-technology segment fell 34.2% year over year to $4.9 million.

Air Methods continued to make progress in reducing its days sales outstanding (DSO) during the fourth quarter. The company reported DSO of 124 days, a year-over-year decrease of six days. That achievement contributed to Air Methods' ability to increase its free cash flow in 2016 by $111.7 million over the prior year.

Patient transports rebounded in the fourth quarter, increasing 11.1% in total and 1.5% on a same-base basis, as the company benefited from changes implemented toward the end of the third quarter and early in the fourth quarter, and from more normal weather. We remain focused on driving shareholder value by improving the utilization of the company's assets, increasing its net revenue per transport through improvements in the company's revenue cycle operations and increasing the percent of commercial claims that are in network, growing the company's air medical footprint, and increasing the revenue and profitability of the tourism operations.

The company provided an update on Feb. 7 for its preliminary January 2017 volumes: Transports dropped 5.7% year over year because of weather cancellations. CEO Todd said January "weather cancellations represented 29.1% of requests, the highest for any month over the past six years."

Those numbers appear to make the possibility for a disappointing first quarter more likely. However, it's more important for investors to focus on the long-term prospects for Air Methods, rather than a single quarter.