An activist firm's letter to the board of directors of Air Methods sent the company's shares higher today. 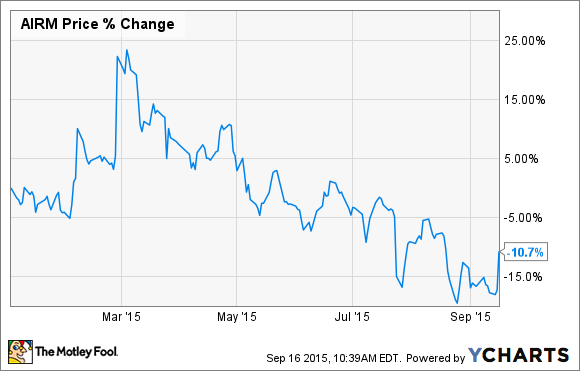 Why it's happening: This upswing in share price was triggered by a letter to the board of directors from Voce Capital Management LLC, who owns approximately 4.9% of Air Methods Corporation. In a nutshell, Voce Capital believes that Air Methods' share price doesn't adequately reflect the company's intrinsic value. As such, they are urging the BODs to explore a sale of the company, possibly to a private equity firm.

What's most important to understand is that Voce estimated that Air Methods would fetch around a 50% premium in a sale, compared to where the company's shares were trading yesterday. Despite this huge potential upside, however, Voce noted in its press release regarding the letter that the BOD has privately refused to engage in discussions of a possible sale.

By making its arguments for a sale public, Voce appears to be attempting to marshal support among the company's broader shareholder base to force a vote on the matter -- a common strategy among activist funds like Voce. Given how poorly Air Methods stock has performed lately, the firm may indeed find some sympathetic ears. Stay tuned.

George Budwell has no position in any stocks mentioned. The Motley Fool recommends Air Methods. We Fools may not all hold the same opinions, but we all believe that considering a diverse range of insights makes us better investors. The Motley Fool has a disclosure policy.

These 3 Healthcare Stocks Are Ridiculously Cheap