Glaukos reported a banner year for its iStent glaucoma solution and gave investors plenty more to look forward to.

Shares of Glaukos Corp. (GKOS 4.65%) continued their impressive climb after the ophthalmic med-tech company reported fourth-quarter and full-year 2016 results yesterday. As of 11:23 a.m. EST Thursday, the stock had tacked on another 9.2% gain, bringing its year-to-date advance to about 44%.

The California-based pioneer of microinvasive glaucoma surgery has enjoyed steady success with its iStent Trabecular Micro-Bypass system for reduction of intraocular pressure. Fourth-quarter sales rose 64% over the prior-year period to $33.2 million, and total sales for the year bounded 60% higher last year over 2015 to $114.4 million. 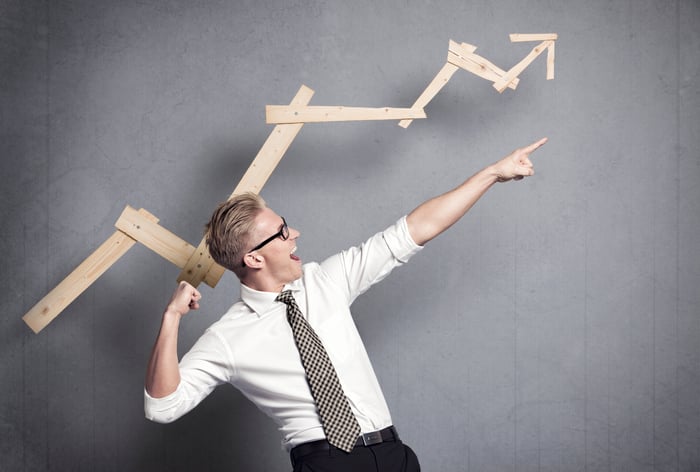 The medical device arena is littered with the carcasses of failed start-ups that once boasted exciting technology that never turned a profit. This is why investors are just as thrilled by operating expenses that rose much slower than revenue. Wider margins allowed Glaukos to squeeze out a $4.2 million operating profit last year, after posting a $10.3 million loss in 2015.

The good news doesn't end there. Glaukos expects sales to continue to climb this year to between $160 million and $165 million. With widening margins, the company should have little trouble achieving sustainable positive cash flows.

Without about $103 million in working capital and no more long-term debt on its balance sheet, the company can direct that cash toward further expansion in international markets and next-generation technology.

Furthest along in Glaukos Corp.'s pipeline is another tiny device that accesses an alternate drainage site called the iStent Supra. It's currently in a pivotal trial that could lead to another glaucoma product launch before too long. Considering the company's recent success in this space, this is one stock you'll want to keep your eyes on going forward.

Why Glaukos Stock Is Tanking Today