Ormat ended the year on a strong note thanks to better-than-expected results.

It's almost always a good sign when a company is able to outperform its management's own guidance. This past quarter, Ormat Technologies (ORA 3.05%) did just that even though it increased its guidance as recently as the third quarter. New geothermal assets coming on line and higher levels of product sales helped push the company's normalized earnings -- and consequently its stock price -- to all-time highs.

Let's take a look at how the company was able to exceed its own most optimistic expectations for the quarter and what it is doing to keep the good vibes going through the rest of 2017 and potentially beyond. 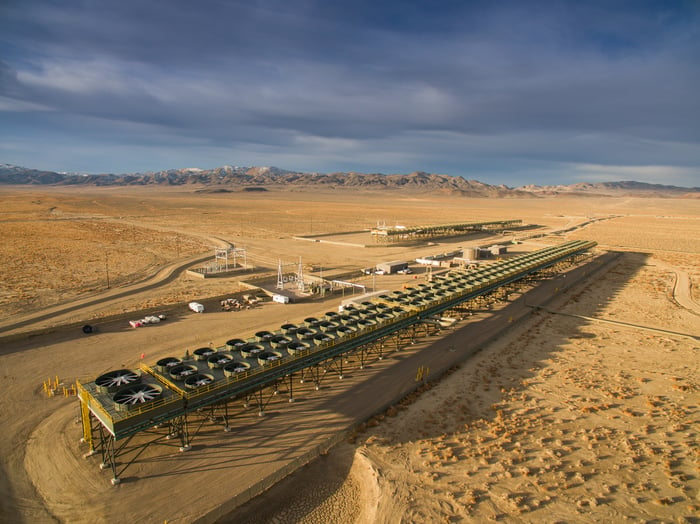 Ormat's third-quarter results were a bit of an aberration as the company had some one-time costs related to settling a litigation suit and pre-paying some higher interest rate bonds to refinance at lower interest rates. This past quarter, we saw some benefits from this move as fourth-quarter interest payments were 12% lower than the prior year, to $15.8 million. That bit of savings was part of the reason why the company's net income results improved faster than operational income.

Revenue in the fourth quarter was down modestly compared to this time last year, which is attributed to lower product revenue that more than offset gains in electricity sales. Product sales can be a little lumpy, though, as product revenue for all of 2016 was actually up 3.5% to a record $226 million. Electricity revenue growth came in large part from the addition of new geothermal plants in Kenya and Guadeloupe as well as improving performance from two of its facilities in the U.S.

For the year, revenue was $662.6 million, which was well above the revised third-quarter guidance of between $637.0 million and $647.0 million. It also hit the top end of its adjusted EBITDA guidance of $323.8 million for the year.

Ormat made several moves over the past quarter, all of which fall within the typical operations of the company and aren't what you would call game-changing events. On top of the EPC contract it won with Cyrq Energy, it sold an equity stake in its Don A. Campbell geothermal plant for $44 million to a joint venture it owns with Northleaf Geothermal Holdings. Also, it transferred ownership of several of its geothermal plants in Nevada to a new LLC that will allow it to monetize renewable energy credits those facilities will generate.

The thing that was probably the biggest game changer, if you want to call it that, was Ormat's decision to acquire privately held Viridity Energy for $35 million. Viridity is a software and services company that looks to optimize and monetize energy management, demand response, and energy storage assets. Ormat intends this acquisition to be a venture into the energy storage and demand response business. While this is indeed an industry with a lot of growth potential over the next several years. It should be noted that this is out of Ormat's wheelhouse of developing or owning geothermal power plants, so there isn't much business overlap here.

In the third quarter, management announced several ambitious initiatives including a U.S. Department inquiry into expanding geothermal power in California and the acquisition of several tracts of land. However, there was no update on those items.

About the company's performance in 2016 and guidance for 2017, CEO Isaac Angel said:

The strength of our electricity and our products segment outperformed our estimates. Our efforts to reduce costs and shorten the delivery lead time enabled us to reap the benefits also in the Products segment where we successfully secured new contracts that supported record revenues in 2016 and robust backlog for 2017. During the fourth quarter we finalized several transactions and raised approximately $200 million net that will reduce our overall cost of debt, strengthen our balance sheet and improve our cash position to facilitate our growth plans.

There appears to be a lot of wheeling and dealing going on in the background at Ormat, but it hasn't so far impacted the company's revenue or bottom line. With these assets sales and restructurings happening, it will be worth watching to see how the company's 2017 results are affected.

Aside from these, Ormat looks to be headed in the right direction: It's building its product backlog, generating decent cash flows that allow it to pay down debt, and it has a decent suite of domestic and international projects lined up that will significantly grow its power-generation base. The real wild card here is its venture into the energy storage and demand response business. There is a great opportunity in this business, but investors should be mindful as to whether the company can drive bottom-line results with this purchase.

Is Ormat Stock Ready to Surge On a Geothermal Power Comeback?