Please ensure Javascript is enabled for purposes of website accessibility
Log In Help Join The Motley Fool
Free Article Join Over 1 Million Premium Members And Get More In-Depth Stock Guidance and Research
By John Rosevear – Updated Mar 2, 2017 at 8:07AM

Tesla (TSLA 2.90%) stock has been on a tear over the last few months. Shares of the Silicon Valley automaker are up over 27% since the U.S. presidential election. Investors appear to have been encouraged by CEO Elon Musk's outreach to the Trump administration, as well as by some reports suggesting that Tesla's make-or-break Model 3 sedan is on track for a third-quarter launch.

But there's another automaker stock that crushed Tesla's returns over that same time frame -- and it's arguably the automaker that least resembles the Silicon Valley innovator.

It's not electric cars that are driving this rally

Here's the chart that tells the tale: Since the surprise election of Donald Trump, Tesla's stock has popped -- but shares of Fiat Chrysler Automobiles (FCAU) have absolutely soared. 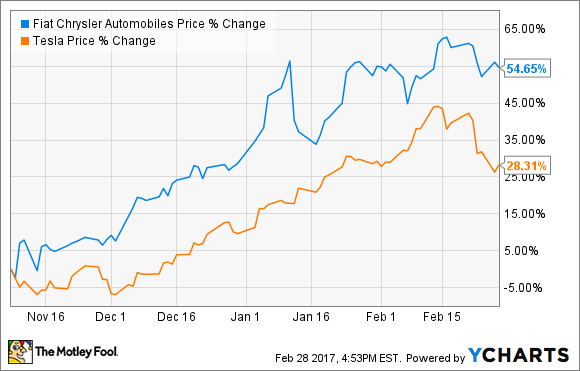 Tesla's brand is built around cutting-edge technology, and that's a big driver of its stock price. In contrast, let's say that FCA isn't exactly the first company one thinks of when one is thinking of technologically advanced automakers.

To a large extent, that's just the result of FCA's circumstances. The Italian-American automaker has spent the last few years scrambling to revamp its global product line under the weight of an exceptionally heavy debt load. It hasn't had the time, funds, or bandwidth to invest heavily in electric cars or self-driving technology.

Why the election of Donald Trump triggered FCA's rally

Right now, FCA's profits are decent. But they're disproportionally driven by vehicles that use a lot of gas, namely its Ram pickup trucks and Jeep SUVs. Investors have seen that as a big problem, with good reason: Fuel-economy regulations put in place by President Obama are set to tighten significantly over the next few years. 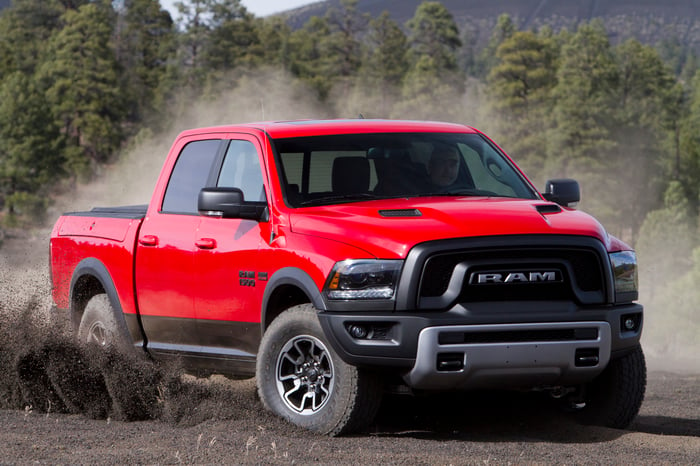 Rivals Ford Motor Company (F 7.76%) and General Motors (GM 8.91%) also make a lot of money from trucks and SUVs, but both are making big investments in future technology like plug-in hybrids and electric drivetrains. FCA isn't, at least not to anywhere the same extent.

That could leave FCA in the lurch. In order to avoid big financial penalties, FCA will have to boost the fuel economy of its trucks and Jeeps -- somehow. Whatever it does will almost certainly reduce the vehicles' performance, add costs, or (likely) both. With gas prices still low by recent historical standards, customers aren't likely to be willing to pay extra to cover those costs.

Long story short, those Obama regulations threaten to put heavy pressure on FCA's already-thin margins. But it looks very likely that the Trump administration will ease those fuel-economy requirements -- giving FCA more time to sell its profitable trucks and SUVs while it scrambles to catch up on other fronts.