Please ensure Javascript is enabled for purposes of website accessibility
Free Article Join Over 1 Million Premium Members And Get More In-Depth Stock Guidance and Research
By Andrew Tonner - Updated May 11, 2017 at 6:59PM

Looking at the results broken out for its four main platforms only highlights the chipmaker's remarkable growth potential.

Last year was arguably the most impressive in NVIDIA's ( NVDA -3.80% ) vaunted corporate history.

This statement is all the more remarkable considering the enviable growth the chipmaker has enjoyed since its 1999 IPO. 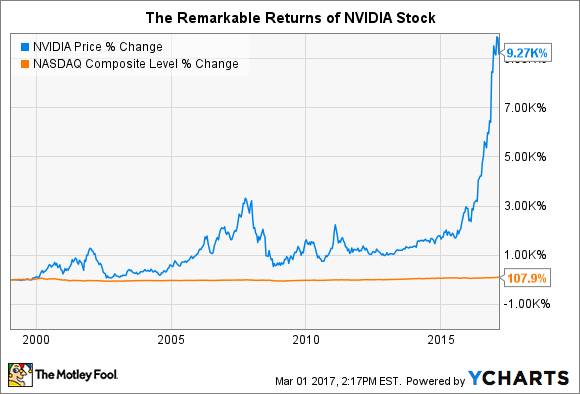 In reviewing NVIDIA's recent fiscal 2017 earnings release, we see that the company set records across nearly every meaningful financial metric, demonstrating impressive momentum in all four of the market platforms it operates: gaming, professional visualization, datacenter, and automotive. Here's the supplemental chart NVIDIA included in its earnings that breaks out its growth across its various market segments. (Fiscal 2017's fourth quarter ended Jan. 29.) 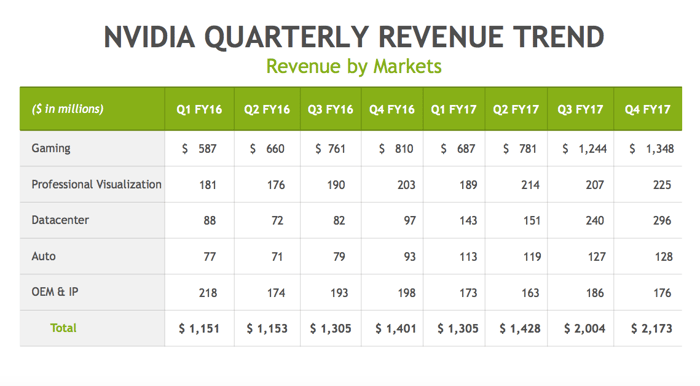 The two main drivers in NVIDIA's record-setting year were the continued ascent of e-sports into a mainstream phenomenon and the growth in A.I. computing. It also bears noting that NVIDIA doesn't consider the OEM (original equipment manufacturer) & IP (intellectual property) segment as one of its four core business areas. In fact, the company mentioned the line item only once during its most recent conference call,  so we won't focus on it here either.

That chart just scratches the surface of NVIDIA's performance, of course, so let's delve deeper into the financial performance of each of NVIDIA's four major product platforms in its record-setting fiscal year.

The continued rise of e-sports and gaming VR were the primary sources of new demand. The company rolled out its new Pascal architecture in its gaming chips several quarters ago, and CEO Jen-Hsun Huang said on the most recent conference call he sees a fair amount of demand remaining among competitive gamers in the current upgrade cycle. The company said it measures its current installed base as several hundred million gamers globally,  and it sees continued growth in demand for its gaming GPU units for the foreseeable future.

One of NVIDIA's less exciting growth opportunities, the professional visualization (PV) platform saw sales rise just 11% to $835 million in its fiscal 2017; PV platform sales rose 11% year over year to $225 million in Q4 too.

The Quadro chips around which the professional visualization platform is organized are built to cater to the needs of high-end professional graphics users such as engineers, designers, and artists whose work requires them to produce highly detailed graphical renderings. NVIDIA continues to innovate on this front. As in its gaming components, NVIDIA continues to utilize its Pascal architecture as the basis for its Quadro chipsets, which allow end users to utilize emerging design techniques such as deep learning, fluid simulation, and the like.  However, NVIDIA's PV market offers the least long-term upside of the company's four main market platforms, so let's not dwell further on it.

In contrast to professional visualization, sales in NVIDIA's datacenter platform utterly exploded in fiscal 2017. For the year, sales increased by 144% to $830 million. More encouraging still, momentum actually accelerated from one quarter to the next in all four quarters, more than tripling year over year in Q4.  On the conference call,  CFO Colette Kress attributed this dramatic uptick to adoption among "A.I. [software companies], cloud service providers deploying GPU instances, High Performance Computing, GRID graphics virtualization, and our DGX A.I. supercomputing appliance."

Specifically, Kress called out tech giants Facebook, Alphabet, and Microsoft as key "hyperscale" customers. NVIDIA chips power the A.I. and neural networks that underpin services like their respective voice-controlled virtual assistants, chatbots, image recognition and more. Moreover, they are also rolling out A.I. software as a service as part of their third-party cloud computing platforms as well. This trend is in its nascent stages though, as evidenced by the dramatic acceleration in the segment's growth rate during the year. As we head deeper into NVIDIA's fiscal 2018, this will be arguably the most important segment to watch as we gauge whether all the hype surrounding A.I. and machine learning will translate into tangible sales for component providers like NVIDIA and others.

Turning to the last of NVIDIA's four core platforms -- to echo a constant refrain -- the automotive segment also yielded impressive results. Sales rose 52% on the year from $320 million to $487 million. However, the fact remains that this is NVIDIA's smallest platform by revenue, which speaks to the youthfulness of the self-driving car movement.

Though NVIDIA has announced partnerships  with an impressive array of automakers, tier-1 suppliers, and technology start-ups to eventually bring completely autonomous vehicles -- what the industry calls Stage 4 self-driving technology -- to the masses, most analysts believe they will not be commercially available for several more years. A key step in this process will be government review and regulation of full AV, which will require massive quantities of driving safety data upon which to base decisions. Either way, NVIDIA figures to profit immensely by supplying its chips to this ongoing revolution in one of the world's largest industries.

Full steam ahead for NVIDIA

NVIDIA has never been in a better competitive position in its corporate history. Of course, success begets competition. Other chipmakers, including Intel and  Advanced Micro Devices,  will challenge it in various areas of its vast GPU dominion. However, as the company with the largest technological lead in the space, NVIDIA's role supplying the chips powering several of tech's most important trends makes it one of the most interesting semiconductor investments on the market today.