Please ensure Javascript is enabled for purposes of website accessibility
Log In Help Join The Motley Fool
Free Article Join Over 1 Million Premium Members And Get More In-Depth Stock Guidance and Research
By John Maxfield - Mar 11, 2017 at 7:27AM

Capital One and Citigroup are the only two big bank stocks that still trade for less than book value.

The recent surge in stocks since the presidential election in November has been particularly generous to banks, pushing the KBW Bank Index up 30% over the past four months. This doesn't mean that there are no more cheap bank stocks to be had, but it does mean that the list has narrowed to two: Capital One (COF -0.98%) and Citigroup (C -1.30%).

These are the only two large-cap bank stocks that still trade below book value, which is the traditional threshold that investors use to demarcate between cheap banks and ones that are considered to be more fairly priced. But just because these banks trade for the lowest valuation of the biggest banks in the country doesn't necessarily mean that either is a buy.

In Citigroup's case, it has a number of strikes against it from the perspective of an individual investor. For starters, its return on common equity last year was only 6.6%. That's half as much as investors expect from a bank Citigroup's size. Indeed, anything below a 12% return on common equity is indicative of a bank that's destroying shareholder value as opposed to growing it, after factoring in the opportunity cost of not investing one's money elsewhere.

On top of this, Citigroup's far-flung commercial and investment banking operations mean that it faces particularly strict capital and liquidity standards, which weigh directly on its profitability. As a global systematically important bank, it must set aside an added 3% of its capital over smaller, simpler banks in order to absorb future losses. And given the heavily protectionist language emanating out of Washington, D.C., nowadays, one would be excused for concluding that Citigroup's internationally focused operations could be hit especially hard if the talk were to materialize into policy.

Along similar lines, Capital One also has things going against it. The first is a downward trend in its profitability, fueled principally by growing loan losses. Its loan loss provision last year climbed by nearly $2 billion "driven by higher charge-offs in our credit card, taxi medallion, and oil and gas lending portfolios, as well as larger allowance builds in our credit card and auto loan portfolios," the bank explains in its latest 10-K. 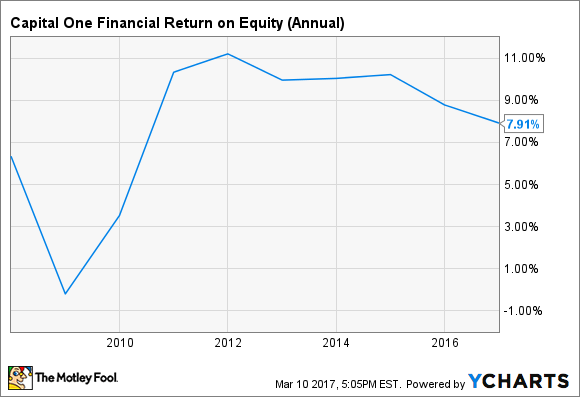 Additionally, because such a large share of Capital One's loan portfolio consists of credit card loans, roughly 41% as of the end of last year, it is especially sensitive to changes in the economy given the relationship between unemployment and credit card delinquencies. In the 2016 stress tests, for instance, the Federal Reserve projected that Capital One would experience the second-largest loss from credit card delinquencies in the industry, after only Citigroup.

In sum, there's a reason these two banks trade for lower valuations then their peers do. Whether this makes them a buy is up to each individual investor -- though with the run-up in stock prices over the past four months, you'd be excused for waiting for a correction before piling into new positions.