Could this small crowd-funding company be the new "growth engine of the American economy"?

Here's a bit of trivia for you: Over its lifetime, the popular crowd-funding website Kickstarter has created enough jobs to fill up an entire monthly Bureau of Labor Statistics job report.

Last month, the U.S. Bureau of Labor Statistics trumpeted an increase in American employment of 277,000 new jobs. That was 100,000 more new jobs than analysts had expected -- but it still wasn't as many jobs as Kickstarter has helped create since its foundation in 2009. As Kickstarter brags in its just-released "2016 Benefit Statement," a recent study by the University of Pennsylvania calculates Kickstarter is responsible for the creation of "300,000+ full- and part-time jobs." 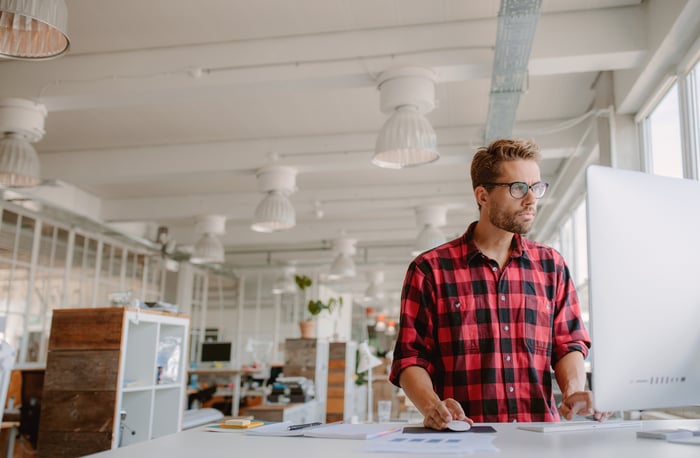 How did Penn come up with this astonishing claim? According to the University, Kickstarter's crowd-funded projects have employed 283,000 part-time collaborators in bringing creative projects to life and spawned the creation of 8,800 new companies and nonprofits. These have included the maker of Pebble smartwatches, later acquired by FitBit (FIT), and VR specialist Oculus, which got bought out by Facebook (META 1.88%) in 2014 -- for a whopping $2 billion. In the process, such Kickstarter-spawned businesses also created an additional 29,600 full-time jobs.

Even if you discount the part-time workers, that makes for more than three full-time jobs created for each successful start-up, confirming that Kickstarter "companies" are more than just one lonely nerd working in a garage. At the very least, each of those nerds has two full-time, salary-drawing employees on the payroll -- and a couple dozen collaborators doing piecework on his project.

From 2009 through August 2015, when I last looked in on Kickstarter's progress, the company had helped its users attract crowd funding for more than 90,000 projects. That number has since kicked up to well over 120,000, with "19,235 successfully funded projects" in 2016 alone.

Every dollar pledged to a successfully funded project resulted in $2.46 in additional revenue for the creator, leading to an estimated $5.3 billion in additional economic activity, says Penn.

That means the contributions people are making to Kickstarter projects are not just one-offs -- pre-payments to get a special goodie advertised on the site. These contributions literally are kick-starting new businesses, and giving them the capital needed to get the ball rolling, gain momentum, and earn new revenue over and above the initial contributions -- 2.5 times over and above.

A kick-start for the economy

In total, the University estimates that Kickstarter has added $5.3 billion to the national GDP over the past eight years. It's also done its part as a responsible taxpayer. In 2016, the company says it paid a "combined effective tax rate of 25%."

That means tiny Kickstarter paid more in taxes last year than did gigantic ExxonMobil (XOM 0.56%). According to data from S&P Global Market Intelligence, ExxonMobil booked a $406 million tax refund in 2016, a year in which Exxon booked $7.8 billion in profits.

A new kind of company

Need more proof that Kickstarter is a different kind of company? How about this: According to its benefit report, last year Kickstarter CEO Yancey Strickler collected a salary only 2.5 times larger than that of the average Kickstarter employee, and his total compensation was still only 5.5 times larger. In contrast, then-Exxon CEO and now-Secretary of State Rex Tillerson was paid $27.3 million. (Exxon doesn't disclose its average employee salary, but The Washington Post notes that Tillerson's salary was "about 500 times the median U.S. household income.")

Of course, unlike Exxon, Kickstarter is not a publicly traded stock. Privately held, it would ordinarily be under no obligation to disclose any of the facts and figures we've discussed here. That said, in 2015, Kickstarter reincorporated itself as a special kind of corporation -- a "public benefit corporation."

More often associated with such things as television networks and metropolitan transportation authorities, public benefit corporations (PBCs) are not non-profits. To the contrary, most do aim to earn a profit. It's just that PBCs such as Kickstarter also expressly undertake to work for the public good, and not simply with the aim of earning profits for their owners. (Other well-known names -- that you may not have known are also PBCs -- include such companies as Patagonia, King Arthur Flour, and Laureate Education).

PBCs also undertake to publish an annual benefit report updating the general public on the overall social impact their activities have had in the preceding year. It was this report that led to the revelations last week -- and we look forward to reading many more such reports as Kickstarter continues to lead the crowd-funding movement in years to come.