It's a couple of years away and it will only be one SUV model at first, but shifting production of Lincolns to China for that market is the next logical step for Ford's luxury brand.

China has been a cornerstone of the bullish investment thesis for Ford Motor Co. (F -1.91%), as the world's largest vehicle market offers the automaker a potential second pillar of revenue and profits. Another cornerstone of that bull thesis is that Ford's luxury brands could finally rebound, boosting average transaction prices as well as margins. Those two ideas have converged with the recent news that Ford will finally begin producing a Lincoln SUV in China in 2019. That's a bigger deal than many might think -- here's why.

Lincoln's momentum in China is accelerating

The Lincoln brand's revival in North America has been painfully slow, but for the first time in at least two decades, its U.S. sales have moved higher for three consecutive years. Part of the drag on that domestic growth has been its brand identity -- Lincoln's cars are perceived as being, essentially, slightly fancier Fords, a rep that has turned some U.S. consumers away from the luxury lineup. 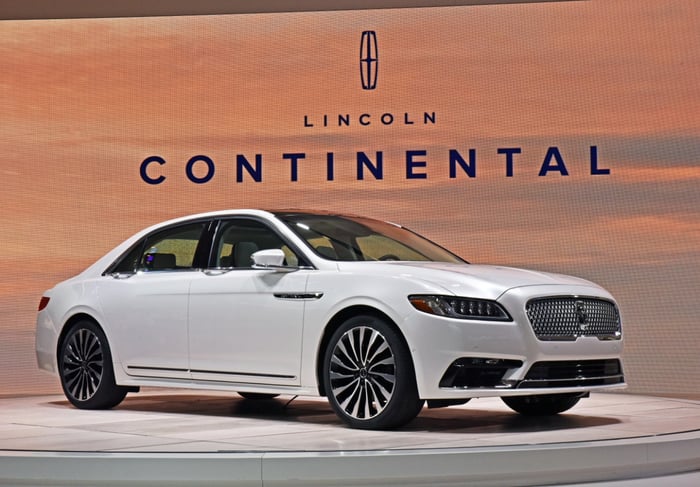 What Ford and Lincoln love about China is that the marque has a clean slate there -- and plenty of potential. Surveys have shown that the brand carries as much clout as Audi in China. Lincoln tallied more than 32,500 sales there last year, almost a 180% gain compared to 2015, which made it China's fastest-growing luxury brand. With Lincoln's momentum accelerating, and the company setting its sights on catching General Motors' Cadillac -- which outsells Lincoln more than three to one in China -- Ford has determined it's time to produce the vehicles within the country to cut costs and boost margins.

Why it's a smart move

Here's the kicker, though, that many investors forget: This move will enable Ford to avoid a 25% tariff in customs taxes imposed on imported vehicles. If all else remains equal, that tariff cost will float down to Ford's bottom line, assuming Lincoln ends up producing all of its vehicles in China in the future -- at first, it's just going to be one unnamed SUV. Or, it will allow Ford to drop the prices of Lincolns without sacrificing margin, making them more competitive and boosting sales.

"Makers of entry-level luxury cars have to localize production, otherwise they couldn't compete with rivals that have done so," Yale Zhang, managing director at researcher Autoforesight Shanghai Co., told Bloomberg. "It is only natural for Lincoln to start production in China after several years of stable growth."

As an example of how much difference the tariff can make, consider that the Navigator SUV sells for $143,000 in China, nearly twice its cost in the U.S. While Ford currently plans to continue importing other vehicles, that will probably change in the years ahead. There are too many examples demonstrating that producing in China for that market is a smart move. One is Nissan, which saw sales of its Infiniti brand hit a record there in 2016, only two years after it began production in China. Ford's crosstown rival, General Motors, has been producing Cadillacs in China since 2006; it topped 100,000 units sold there for the first time last year.

Ultimately, while production of Ford's as-yet-unnamed SUV won't start until 2019, and it still plans to import some Lincolns into China, this is the first step in a transition that could drastically reduce its costs, and give Lincoln the flexibility to drop its prices or inflate Ford's bottom line. For investors, that's all you can ask for.