Investors know the wealth-building power of dividends, and that typically the companies that offer them are well-established, healthy companies that generate significant cash flow. However, things change fast in the business world, and when a company cuts its dividend, it's a bad sign. Three of our contributors believe that Staples, Inc. (NASDAQ:SPLS), Caterpillar, Inc. (NYSE:CAT) and GameStop Corp. (NYSE:GME) might find themselves slashing their dividends sooner or later. Here's why.

Daniel Miller (Staples, Inc.): Staples is a store operator selling office products and services with a focus on office supplies, technology, copying, and printing. It even dabbles in furniture. It's also a company most of us have seen start down the path of the dinosaur, as foot traffic has declined over the years and stores have aged. As it sits now, if management can't turn things around rather quickly, a dividend cut could be the next issue facing its investors.

Just days ago, Staples announced that it would dish out its quarterly dividend of $0.12 per share, payable on April 13, but that could be one of the last of such announcements. Staples' dividend hasn't budged since early 2013, and its free cash flow has only further declined. Here's a brief visual history of Staples' declining metrics. 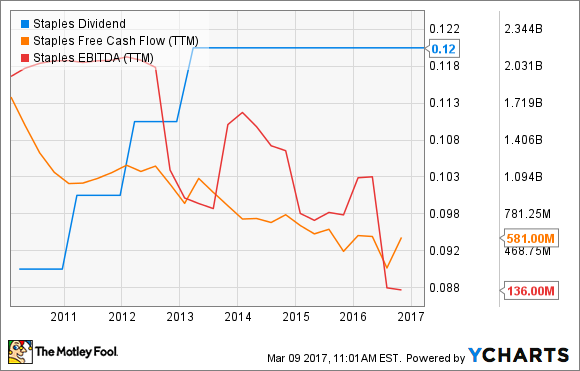 Assuming there's no dividend increase in its future, Staples will likely pay a similar $311 million in cash dividends in 2017, and with its expectations of generating about $500 million in free cash flow this year, it'll be paying out about 62% of its FCF. While that's doable in the near term, if the company's financial performance keeps deteriorating, expect a dividend cut.

And let's be honest: There hardly looks like a light at the end of the tunnel for the company's business. A judge blocked a potential game-changing move for Staples and Office Depot to merge and create cost synergies, so that option is off the table. Staples already entered into an agreement to sell a controlling interest in its European operations and has completed the sale of its retail business in the United Kingdom. It shut down 13 stores during the fourth quarter alone and 48 stores during the full year, and it has largely failed to reignite its top line or comparable-store sales results.

These are hardly signs of a healthy company and business model, and if those results continue to deteriorate, management won't have much of an option other than to cut its dividend in the years ahead and try to fuel its turnaround efforts with the saved cash.

Caterpillar's dividend isn't as stable as it seems

Travis Hoium (Caterpillar): There hasn't been much good news for Caterpillar in the past few years, but still its dividend keeps charging higher. The company is now paying out $3.08 per share in dividends annually but is losing money overall. 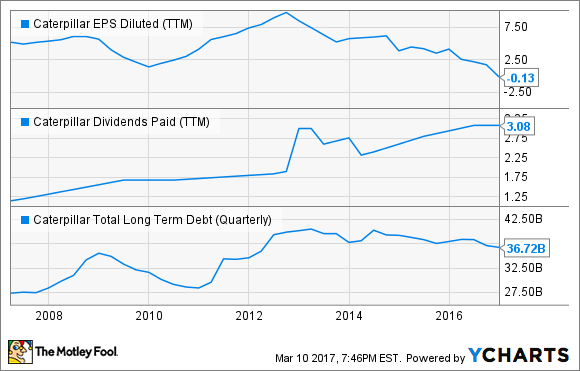 Then there's the $36.7 billion in debt looming over the company. Stubbornly low commodity prices have also been a drag on demand and show no signs of changing. There's been hope that a massive infrastructure bill in the U.S. could lead to more demand in the near future, but even that seems to be getting lost in the D.C. muck right now. To make matters worse, some of Caterpillar's offices were raided earlier this month in relation to an IRS investigation into tax fraud. No charges have been filed, and we have no idea where this will lead, but it's never a good sign when the feds come knocking.

Given the falling earnings, high debt load, macro challenges, and IRS investigation, I wouldn't count on Caterpillar's dividend in the long term. The company may find in the near future that it has more urgent uses for the cash it does generate from operations.

A big dividend and a big problem

Tim Green (GameStop): Because shares of video game retailer GameStop have been beaten down over the past few years, the stock sports a dividend yield in excess of 6%. GameStop's dividend, paid in quarterly installments of $0.38 per share, looks pretty safe at the moment. The company produced $3.72 in EPS over the past 12 months, putting the payout ratio at just 41%.

But GameStop depends on the sale of physical games, and it derives a significant portion of its profits from selling used games at small discounts. The major game consoles still use discs, but it's difficult to imagine a world in which console gaming doesn't follow in the footsteps of PC gaming by going almost entirely digital. With thousands of GameStop locations dependent on physical game sales, a major shift toward digital would wreak havoc on the bottom line.

GameStop has been diversifying, moving into selling electronics, collectibles, and digital games. But the core gaming business could vanish if the next generation of game consoles eschew discs in favor of digital games. Last month, Microsoft announced Xbox GamePass, a subscription that gives Xbox One owners full access to more than 100 older games. This type of product is a major threat to GameStop's lucrative used-games business, and it may be just the beginning.

GameStop's dividend isn't under threat right now, but I wouldn't bet on seeing that generous payout stick around.