USG Corporation (NYSE:USG) and Corning Inc. (NYSE:GLW) are both over a century old. Each has developed technologies and patents that provide it with competitive advantages that can be used to ward off the competition.

When a company can fend off competition due to advantages in its product or service, it very well may have built a protective "moat" around its business. The company is able to maintain or increase market share and even sell its products at a premium, which can be great for an investor's portfolio. Let's take a look at these two companies with potentially strong moats.

A play on residential and commercial construction

USG is a leading supplier to the residential and commercial building industry, for both new construction and remodeling activity. The company notes its leadership in products including gypsum wallboard (it owns the Sheetrock brand), joint compound, ceiling suspension systems, and  acoustical panels. It also manufactures exterior sheathing, flooring underlayment, and roofing systems. 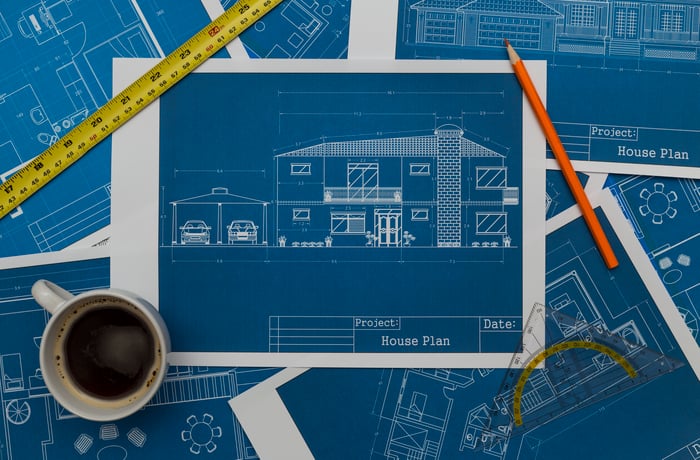 The company supplies its products throughout North America, sells in 20 countries worldwide, and has a joint venture in USG Boral Building Products, a leading plasterboard and ceilings joint venture across Asia, Australasia, and the Middle East.
The chart below shows the company's rising stock price in comparison to its increasing annual revenue which, to no surprise, is linked to the recovery in U.S. housing. 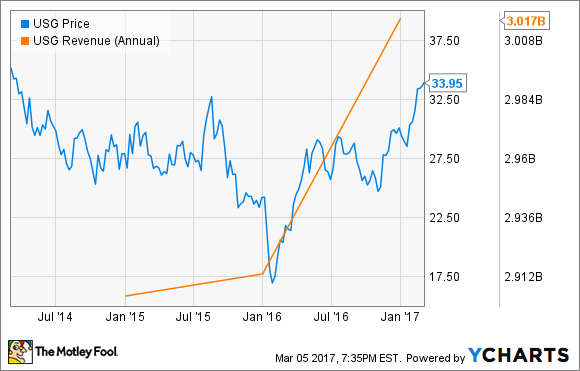 At the end of last year, USG removed an impediment from its U.S. sales strategy when it sold its distribution network, L&W Supply. In addition to giving the company $670 million in cash to pay down debt, this also removed a competitor to many of its customers who are also distributors to the construction industry. This should result in distributors being more agreeable to selling USG products throughout the United States.

Product innovation and a key shareholder

An example of USG's product innovation is its patented Sheetrock UltraLight drywall. The product was introduced in 2010 and is 30% lighter and stronger than standard wallboard construction material. Lighter Sheetrock translates to lower transportation costs, faster installation, and lower labor costs for installation.

The largest shareholder of USG stock is Warren Buffett's Berkshire Hathaway (NYSE:BRK.A) (NYSE:BRK.B). According to Berkshire's most recent annual report, it owns 29.7% of the company. When you invest alongside Buffett, you know you are following the lead of a stable shareholder who won't be running for the exits every time the share price takes a dip. Berkshire has owned shares since 2006 as USG is the type of business that fits nicely in Buffett's long-term outlook on the growth of the U.S. economy.

It all started with the light bulb

Corning is a leader in a number of different material fields centered around its glass products. Corning's history of innovation began with the development of a bulb-shaped glass encasement for Thomas Edison's incandescent lamp; by 1908 this business accounted for half of the company's revenue.

Since then, Corning has developed thousands of patents. The company serves five business areas: optical communications, with its optical-fiber products; mobile consumer electronics; displays; the automotive industry; and life sciences. As an example of the company's patented innovation, in 2007 Corning created Gorilla Glass to provide cellphone companies with a very strong, flexible, and light glass to use for screens. More recently, Corning's automotive business unit began shipping to vehicle manufacturers glass that is lighter and helps the carmakers get better gas mileage by reducing the weight of the car.

The chart below shows a stock price that has done well over the past year in comparison to the company's annual revenue. The share price appreciation is partially due to the company's focus on returning profits to shareholders through dividends and share buybacks. 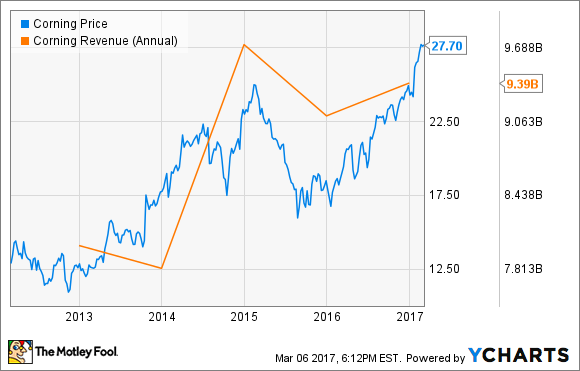 Are these advantages sustainable?

USG and Corning operate in industries that look to have a solid future. They aren't exactly making buggy whips. It would take a big disruption to replace the likes of walls, ceilings, and glass. In addition, the patents that USG and Corning have for their core technologies allow each to create superior solutions that are hard to duplicate.

Both companies are leaders in their respective fields, have developed long-standing customer relationships, and churn out cash that allows them to fund the development of future products. All of these characteristics coupled with their product differentiation helps create the moat that keeps competitors at bay.  Each tends to be more affected by the ups and downs of the industries it serves than by loss of market share to its competition.

Does one have an edge?

USG and Corning have withstood the test of time. Each has a long and colorful history, and investing in either should allow an investor to sleep well at night.

If I had to choose one over the other I would select USG. I like the idea that Buffett has invested in the company and has held shares for many years. Moreover, during the housing crisis of 2008, USG was able to get a cash infusion from Berkshire Hathaway by selling it convertible senior notes. Berkshire's 29.7% ownership stake is so large that it gives me confidence in the long-term prospects for the company.