President Donald Trump is on a roll.

A series of tweets targeting the high cost of Lockheed Martin's (NYSE:LMT) F-35 stealth fighter jet apparently resulted in LockMart cutting $600 million off the price of a batch of 90 stealth fighters in January. It may have even had something to do with Boeing (NYSE:BA) offering the Navy a steep price cut on a deal to buy a dozen F/A-18 and EA-18G fighters in March. Now, if Boeing could just be convinced to cut the price on its Air Force One contract by a few hundred million, savings resulting from Trump's defense-spending tweet storms could soon top $1 billion.

This gets us to wondering: Which big-ticket defense-spending programs will Trump target next -- and which defense companies will see their profits pinched as a result? 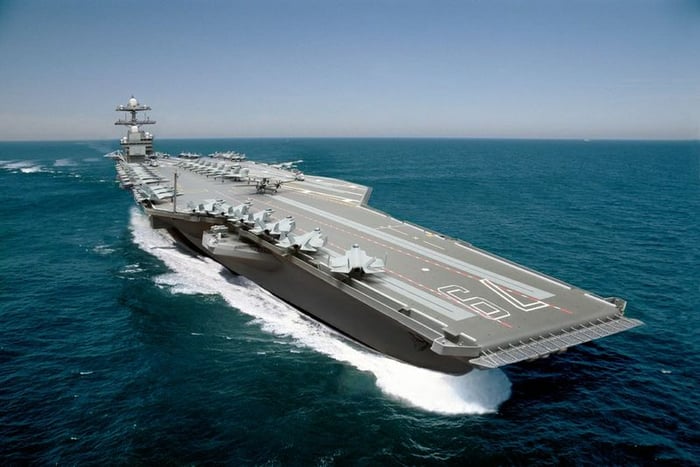 Earlier this month, Trump boarded the USS Gerald R. Ford to make a speech in support of his proposal to grow the U.S. Navy to 350 ships in size, including 12 full-size nuclear-powered aircraft carriers. That's two more carriers than we currently have -- which sounds like good news for Huntington Ingalls. But here's the thing: At the same time as Trump made the case for enlarging the Navy, he also suggested that he wants all of these new ships to come with smaller price tags. "The same boat for less money, the same ship for less money, the same aircraft for less money," promised the president. "That's what we do."

Huntington's problems may not end at the water's surface, either. While it's the principal contractor building the Ford-class carriers, Huntington will cooperate with peer shipbuilder General Dynamics (NYSE:GD) to build the new Columbia class of ballistic missile submarines, which will replace the current Ohio class (and up until recently, it was commonly called the "Ohio Replacement Class").

According to the U.S. Navy, Columbia-class nuke boats will cost just $6.6 billion -- eventually, and assuming General Dynamics and Huntington can build them fast enough, and win bulk contracts for their construction, so that efficiencies of scale kick in. But according to the Congressional Budget Office, before that happens, the lead ship of the class -- USS Columbia -- will cost about $13 billion to build.

That's bound to create sticker shock at the White House, and it could earn Huntington and General Dynamics some nasty tweets. If this results in lower prices, and reduced profit margins, it could prove especially problematic for General Dynamics, which, unlike Huntington Ingalls, earns only an 8.8% profit margin on its shipbuilding business as it is.

If Trump wants to find a really big big-ticket item to attack, though, he'll need to raise his sights above the horizon -- raise 'em way up, in fact, and scan the skies for Northrop Grumman's (NYSE:NOC) new B-21 "Raider" stealth bomber program.

The Air Force initially laid out a goal of buying B-21s for about $550 million. So, pricing its bid at just $511 million per plane, Northrop Grumman may feel it has won itself some immunity from Trump's criticism of too-high military aircraft prices. But there are a couple of caveats I need to point out here.

First and foremost, Northrop quoted its $511 million price tag in 2010 dollars -- although its bid to build the plane was placed in 2015. In today's dollars, the plane is already expected to cost closer to $558 million per unit. Additionally, this per-plane cost refers only to the cost of construction and does not include the cost of developing the B-21 in the first place. Once you add all of the costs in, the actual cost to U.S. taxpayers of building a fleet of 100 B-21 stealth bombers comes to $79.2 billion (best case), or even as much as $93 billion (my best estimate).

Across a fleet of 100 aircraft, that works out to nearly $1 billion per airplane, or about 10 times the average cost that Lockheed Martin is targeting for its F-35 stealth superjet. A tempting target for a mean tweet from Trump?

I think so. Northrop Grumman had better "watch its six," or its fat 13% operating profit margin could soon be at risk.