Please ensure Javascript is enabled for purposes of website accessibility
Log In Help Join The Motley Fool
Free Article Join Over 1 Million Premium Members And Get More In-Depth Stock Guidance and Research
By Daniel Miller, Travis Hoium, and Timothy Green - Mar 20, 2017 at 11:03AM

With the pipeline operator focusing on improving its balance sheet amid a tough energy market, these three stocks are a better option for investors.

Kinder Morgan's management team has had a rough couple of years with lower oil prices and headwinds facing project development. In addition to battling these issues, both of which threaten organic growth, the company is focusing on improving its balance sheet amid a tough market. While value investors could be tempted to scoop up shares of Kinder Morgan, here are three companies our analysts think are a better option: International Business Machines (IBM -0.05%), NRG Yield (CWEN 2.27%), and The Boeing Co (BA 2.28%).

Tim Green (International Business Machines): As my biggest holding, IBM is right at the top of the list of my favorite stocks. The company is undergoing a multiyear transformation, investing heavily in areas like cloud computing, analytics, and artificial intelligence. At the same time, it is deemphasizing or selling off legacy businesses where growth prospects are poor. The net result has been years of revenue and profit declines. 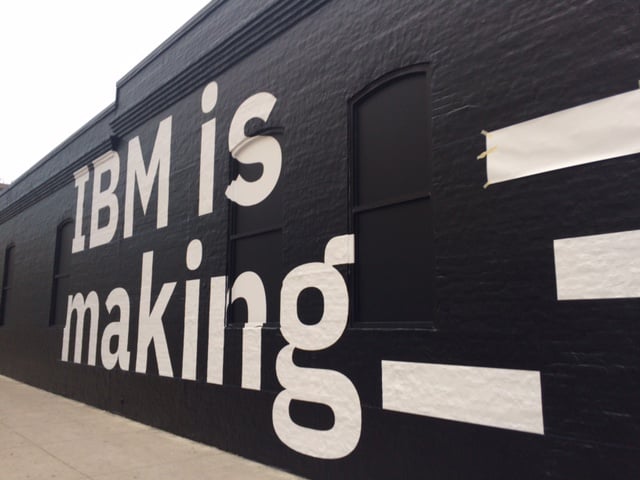 With IBM expecting to grow adjusted earnings per share (EPS) in 2017, a turning point has finally been reached. The company's strategic imperatives, comprised of all of its growth business, now account for 41% of total revenue, and the cloud computing business generated $13.7 billion of sales last year. Cloud products delivered as a service are now at an $8.6 billion annual run rate, growing by 61% in 2016. There are a lot of moving parts, and revenue still hasn't returned to growth, but it's clear that IBM is making progress.

While the stock has surged over the past year, IBM is still a solid value. With adjusted EPS of $13.80 expected in 2017, IBM stock trades for less than 13 times earnings. In a market where the S&P 500 sports a trailing P/E ratio of nearly 27, IBM is certainly worth a look.

A solid dividend from renewable energy

Travis Hoium (NRG Yield): If you're looking at an energy dividend stock like Kinder Morgan, you should take a look at yield companies. And NRG Yield, in particular, is a great yieldco for investors in today's market.

The company owns a small number of fossil fuel assets, but most of its assets are wind and solar projects that have long-term contracts to sell energy to utilities. This gives NRG Yield a consistent source of cash, most of which is then used to pay shareholders a dividend.

At 6.3%, the dividend yield is nearly triple Kinder Morgan's dividend and still has room to grow. Yieldcos are structured in a way that will allow them to issue new shares and debt in order to buy more renewable energy projects. And with one of the lowest yields in the industry, NRG Yield can buy projects on the open market that will be accretive to the dividend over the long term.

The company's sponsor, NRG Energy, is also a source of new projects. NRG Energy bought 1.5 GW of projects from bankrupt SunEdison, and those projects could be dropped down to the yieldco as they become operational. When it comes to dividend stocks, NRG Yield is among the best in the energy industry today because of its strong yield and growth potential.

Daniel Miller (The Boeing Co): With oil prices in flux and a more intense focus on Kinder Morgan's balance sheet, dividend investors might be better off looking for other companies to invest in. One company that should be at the top of that potential list is Boeing.

Boeing has consistently bumped up its dividend payment to shareholders, and in December increased the quarterly dividend by 30%, to $1.42 per share -- that's a healthy 3.1% yield. As you can see in the graph below, Boeing's dividend payout has accelerated in recent years. 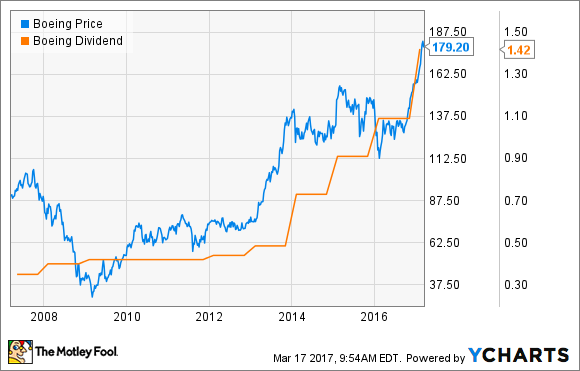 In addition to a healthy dividend, Boeing's forecast for commercial aircraft over the next three decades is strong. Between 2016 and 2035, the company anticipates total demand to require more than 39,000 commercial aircraft valued at roughly $5.9 trillion -- and Boeing is poised to capture its fair share of that growth.

And if investors want reassurance rather than 20-year forecasts, Boeing has that, too. Its backlog of more than 5,700 commercial aircraft provides a top-line revenue safety net -- worth roughly five years of revenue -- which few, if any, companies can rival. If you're looking for a dividend that's safer than Kinder Morgan's and steadily increasing, look no further than this aircraft juggernaut.