It's been an ugly few years for solar industry investors. And with the way the market continues to beat up on most solar stocks, it may be hard to see any light at the end of the tunnel.

Despite the frustrating cyclical nature of the industry, solar remains one of the best long-term growth industries on the planet. The global middle class is growing much bigger, and that growth is set to last for decades. Bottom line is, there's no doubt solar will become a much bigger share of the global energy pie. 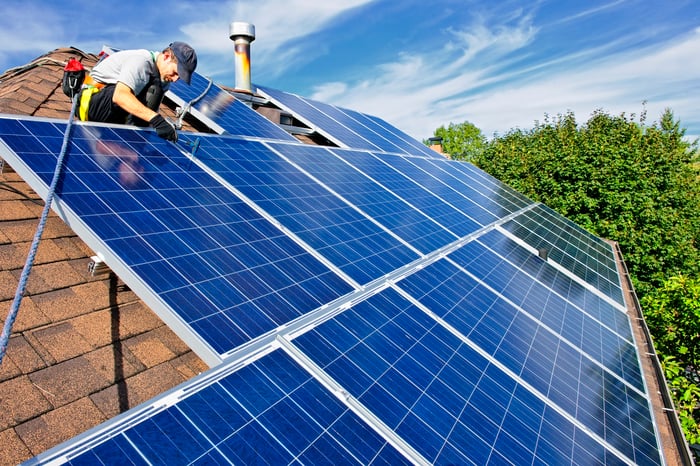 A new parent that knows how to create value

Matt DiLallo (TerraForm Power): Like many investors, I've been scorched by solar stocks in the past. So I know just how long-suffering TerraForm Power investors feel after seeing the stock lose nearly two-thirds of its value since going public. However, I think much brighter days lie ahead for the company.

TerraForm recently announced that the value-creating geniuses at Brookfield Asset Management (NYSE:BAM) had agreed to acquire a controlling stake in the company. That's a big deal, considering Brookfield's other renewable-power investment, Brookfield Renewable Partners (NYSE:BEP), has delivered a market-beating 10% annualized total return for its investors over the past three years.

As part of the agreement, Brookfield will replace TerraForm Power's bankrupt former parent, SunEdison, as its sponsor. It will also offer the company the right of first refusal for a 3,500 MW portfolio of operating wind plants and development-stage wind and solar projects in North America and Western Europe. For perspective, that would more than double the company's size if it acquired the entire portfolio. Furthermore, Brookfield will provide TerraForm with a $500 million acquisition facility to support growth as it works to get out from under the weight of debt SunEdison had piled on the company.

This deal does two things for TerraForm Power: It solidifies its financial situation and its growth profile. That should enable the company to grow its cash flow and eventually reinstate the dividend. It's that potential to create value, backed by a supportive parent that has created value in the past, that makes TerraForm Power a compelling solar idea for investors with a long-term mindset.

The devil is in the details for yieldcos

Tyler Crowe (8point3 Energy Partners): I can understand why investors might be a little hesitant to invest in a yieldco like 8point3 Energy Partners. The spectacular implosion of SunEdison and the subsequent issues for TerraForm Power and TerraForm Global were great examples of how an entity that simply owns operating solar projects under contract isn't enough to be a solid investment. The parent company matters, the rate of growth matters, and the ability to access capital matters.

When it comes to these three things, 8Point3 Energy Partners is in much better shape than most yieldcos. Unlike a single parent company, 8Point3 is co-sponsored by both First Solar and SunPower. The dual-parent model is beneficial for 8Point3 in that it lowers the risk that the parent company is selling or dropping down assets to the yieldco at inflated prices to make the parent look good. Also, both First Solar and SunPower have a reputation in the industry for focusing more on measured growth rather than rapid growth for growth's sake. For 8Point3, this translates to a modest growth rate -- management expects to grow its dividend by 12% in 2017 -- that has the ability to continue for several years down the road rather than sprinting in the beginning and quickly losing steam.

If there's one concern for 8Point3, it's the continued access to capital. The yieldco's current dividend yield of 7.8% means that raising capital through equity is prohibitively expensive. The good thing here is that the company has not yet painted itself into a debt corner, and its current payout is well within reason given its contracted cash flows. If the company continues to maintain a modest growth track that focuses on keeping its debt levels low and starts to use some internally generated cash to partially fund projects, then the concern for access to capital will dissipate over time. Those are the kinds of traits you want to see from a high-yield investment, and it could be a great way to invest in the solar industry today.

Despite the cyclical downturn, this stock is worth buying and holding

Jason Hall (First Solar): One of the things that makes investing in the solar industry a challenge -- not to mention very frustrating -- is that it's both an industry with massive growth prospects and one that's proved to be stubbornly cyclical. And even a top manufacturer like First Solar has proved not to be immune from this reality. 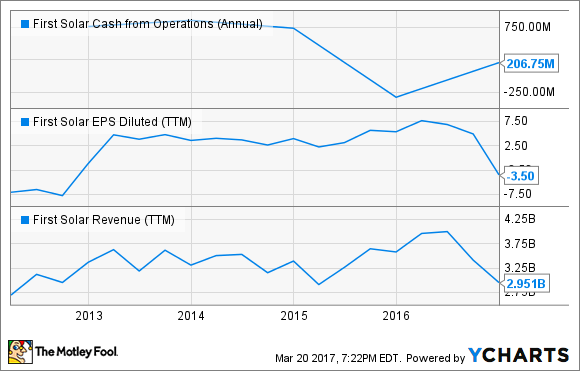 First Solar saw its revenue, profit, and cash flow fall sharply in 2016 on weak demand for utility-scale solar projects. Furthermore, there are many in the industry who don't expect that demand to really start coming back for another year or two.

But First Solar isn't standing still while the market struggles. The company took a $729 million charge at the end of 2016, tied to restructuring. The plan is to lower its expenses to better match the demand environment while the downturn persists, while also taking a bold step in its next-generation panel development.

Management decided it would make more sense to skip "Series 5" and instead go from its current Series 4 panels and launch Series 6 in 2018. The idea is that the company will go a little longer between iterations, but instead of rolling out a slightly improved product in a weak-demand environment, it will bring an even better panel to market when demand is starting to ramp up in 2018.

With over $1.3 billion in cash and less than $200 million in long-term debt, First Solar is in a solid financial position to take this step now. This could put the company in an incredibly strong position right when the cycle is turning. Investors willing to ride out the market between now and then could do very well to invest in First Solar now.