Please ensure Javascript is enabled for purposes of website accessibility
Log In Help Join The Motley Fool
Free Article Join Over 1 Million Premium Members And Get More In-Depth Stock Guidance and Research
By Scott Levine - Updated Mar 30, 2017 at 8:17AM

The promise of a bright future suggests that this miner offers investors a golden opportunity.

Up more than 7% year to date, the price of gold may be poised to climb even higher as fear and volatility creep into the market, riding the coattails of President Trump's low approval rating. So with Warren Buffett's advice in mind -- to be greedy when others are fearful -- let's consider two leading gold miners, Goldcorp and IAMGOLD, to see which one offers the more compelling argument for investment. 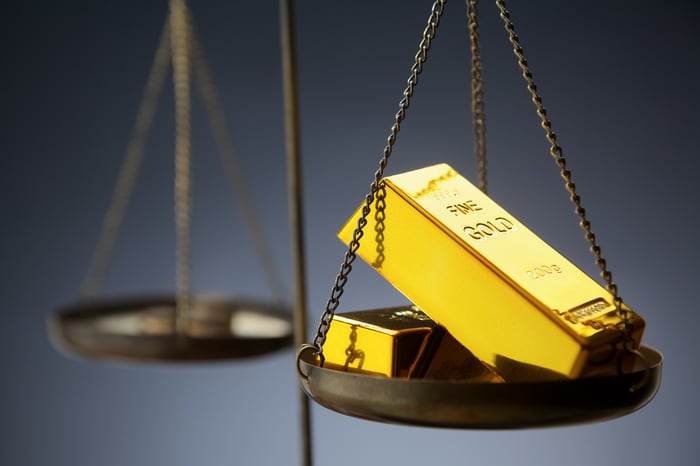 The most decisive factor in choosing an investment, however, is hardly which business operates the most mines, so let's compare the companies on some important metrics to gain better insight.

This brief look suggests there's no runaway winner. Benefiting from economies of scale, Goldcorp -- with an operating margin of 10.5% -- appears to be the better operator. IAMGOLD, however, seems more adept at turning shareholders' investments into profits. So let's grab our pickaxes and dig in even deeper.

In weighing these two gold miners against each other, one factor which tips the scales in Goldcorp's favor is its strategy for the next next five years. Working to increase the company's net asset value per share, management intends to grow both production and reserves by 20% while reducing all-in sustaining costs (AISC) by 20%. This translates to annual gold production between three million and four million ounces by 2021, gold reserves of approximately 50 million ounces, and AISC of approximately $700 per gold ounce. IAMGOLD, on the other hand, is forecasting gold production to grow at a faster clip -- about 25% growth by 2020 -- resulting in annual production of about one million ounces. The rub, however, is in management's outlook on the company's AISC. Currently, IAMGOLD operates as a marginal producer, reporting AISC of $1,057 per gold ounce -- considerably higher than Goldcorp's AISC of $856 per gold ounce. And the disparity will only grow further in the future; management forecasts AISC to total between $900 and $950 by 2020 -- far less profitable than Goldcorp, which anticipates AISC of $700 by 2021.

Another reason for investors to go with Goldcorp is the company's dividend. Granted, Goldcorp offers a meager 0.50% yield, but it's more attractive than IAMGOLD's dividend, which is non-existent; the company stopped returning cash to shareholders back in 2013. Although Goldcorp returned $0.42 per share to investors in fiscal 2015, it only paid out $0.10 per share in fiscal 2016. Goldcorp's management, in its 40-F filing, reported that the reduction of its dividend in 2016 was "a prudent measure to increase financial flexibility."

As the company executes its plan for growth over the next five years, I wouldn't be surprised if management raised the dividend. I'm not as confident, though, that IAMGOLD will be reinstituting its dividend anytime in the near future.

The case for IAMGOLD

While IAMGOLD lags Goldcorp in several areas, one place where it shines is its balance sheet. According to a recent investor presentation, IAMGOLD's financial health -- as indicated by its leverage -- is significantly stronger than many of its peers. 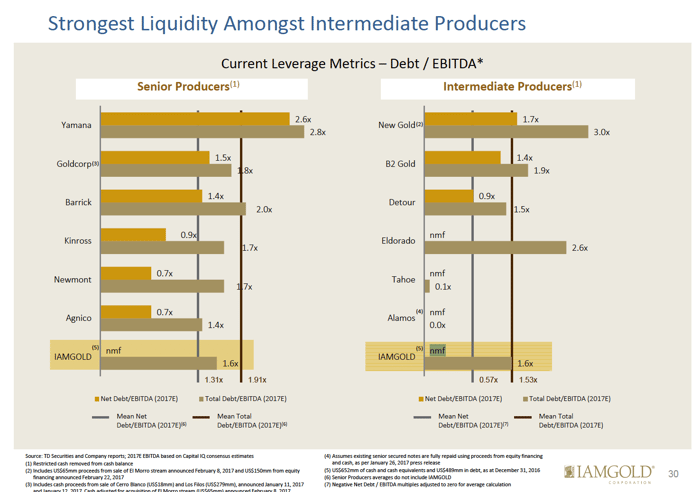 With zero net debt -- something which is far from common in the mining industry -- the company is in a much more secure position than Goldcorp, which maintains a net debt-to-EBITDA ratio of 1.5, higher than the industry average of 1.3.

Moving beyond leverage ratios (but still minding the company's debt) we find that IAMGOLD appears more attractively valued than Goldcorp in terms of its enterprise value-to-EBITDA (EV/EBITDA) multiple. 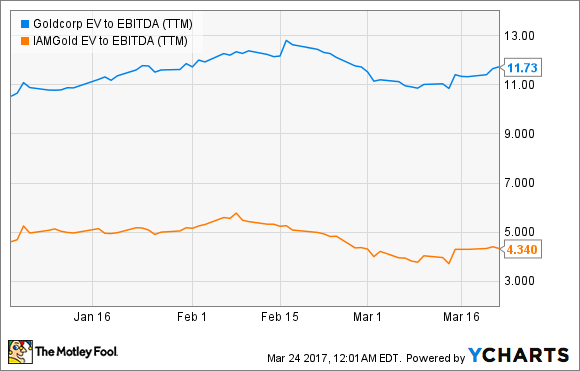 In the tale of these two gold-miners, the better opportunity, undoubtedly, lies with Goldcorp. Producing gold at a significantly better margin in fiscal 2016, Goldcorp will likely further distinguish itself from IAMGOLD in the years to come as it drives toward its target of AISC of $700 per gold ounce by 2021.

But I think Goldcorp is a more compelling proposition than IAMGOLD for reasons beyond this one metric.

The quality of Goldcorp's portfolio seems more appealing than that of IAMGOLD. In addition to Penasquito, Mexico's largest gold-producing mine, Goldcorp has several high-quality assets which have the potential for numerous organic growth opportunities. According to management, the optimization of the company's portfolio -- resulting in gold production from six to eight large-scale camps -- will help the company achieve economies of scale and help drive down AISC. IAMGOLD, on the other hand, has a far less impressive portfolio.

On the surface, IAMGOLD may seem more attractively valued with an EV/EBITDA ratio of 4.3. And the fact that it trades at 1.7 times trailing sales -- much lower than Goldcorp, which trades at 3.8 times trailing sales compared to an industry average of 3.2 according to Morningstar -- may make it seem like an even more attractive opportunity, but this is merely fool's gold. As Mr. Buffett says, "It's far better to buy a wonderful company at a fair price than a fair company at a wonderful price."