Qualcomm's early move into this market could reward shareholders in the long run.

Qualcomm (QCOM 1.20%) has been ceding ground to MediaTek in the smartphone processor space, and could run into more trouble as China tries to create an indigenous smartphone chip industry with a $100 billion investment. Xiaomi is now going to make its own smartphone chips -- with help from the Chinese government -- creating more trouble for the American chipmaker, since it is one of its customers.

These challenges have forced Qualcomm to go low in the smartphone value chain, serving cheaper phones, to defend its market share, so its latest move to target the lowest end of the market doesn't seem surprising. 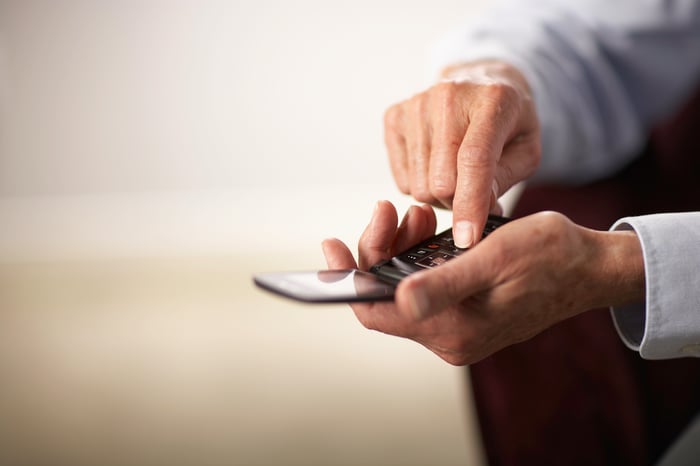 Feature phones are going to be big

Feature-phone sales are going to explode in the coming years and Qualcomm doesn't want to miss the gravy train. Counterpoint Research estimates that a massive 400 million feature phones were sold in 2016, driven by strong demand from Southeast Asia and Africa, where LTE adoption is gaining pace.

The research firm also forecasts that 60 million 4G-enabled feature phones will be sold this year, with half the sales coming from India. These 4G-powered budget devices could drive the bulk of sales in the Indian market, where an estimated 135 million feature phones were sold last year. What's more, 4G feature-phone sales in India could hit 200 million over the next five years, creating a $6 billion sales opportunity.

Africa, meanwhile, is another fertile market for such devices; feature-phone sales there jumped 14% last year, outpacing the 6% growth in total handset sales, according to Counterpoint. Feature phones sell for less than $20 on average, making them attractive in developing economies with low per-capita incomes, since a smartphone is quite expensive at $256 on average.

Qualcomm, therefore, has made a smart move by launching a chip platform to target the lowest end of the market, while striking partnerships with key manufacturers to grab a larger slice of the pie.

Qualcomm's recently launched 205 Mobile Platform is going to bring LTE and other capabilities to sub-$50 phones. Phone manufacturers can now give customers access to 4G-enabled services such as voice over LTE, voice over Wi-Fi, and digital payments, all usually found in more expensive devices.

In fact, Qualcomm's platform can provide a richer feature-phone experience: It supports 4G, 3G, and 2G network bands, while also providing a fast dual-core processor, high-definition video streaming, location services, and a graphics processing unit. More importantly, Qualcomm has brought out this chip just in time, as manufacturers are now realizing the importance of feature phones to grow their sales.

For example, Nokia (NOK 0.42%) resurrected the iconic 3310 at the Mobile World Congress in Barcelona this year, generating a lot of buzz. The Finnish company was initially said to be engaging in fan service with this device, but it has serious plans. The company will launch the 3310 in 120 markets during the second quarter as it tries to capture the booming demand for feature phones.

However, Nokia might have to resort to Qualcomm's 205 chip platform to bring 4G to its potential customers. This is important for the Finnish company, given the decommissioning of 2G networks in certain markets. Not surprisingly, rumors suggesting that Nokia could make a 4G feature phone based on Qualcomm's platform are gaining legs of late.

Qualcomm has made a good marketing move by selecting New Delhi to launch its feature-phone platform, since India has the potential to become one of its biggest markets. The chipmaker has struck partnerships with Indian phone companies such as Micromax and Reliance Jio that could be key to its success in this market.

Micromax is India's third-largest smartphone seller in terms of revenue, and is reportedly prepping a sub-$50 Android smartphone with 4G capability, along with a $30 4G feature phone. Reliance Jio, on the other hand, has revolutionized the telecom landscape in India by offering free 4G services, racking up close to 100 million subscribers in just six months.

It is now said to be working on a 4G-enabled feature phone that could translate into substantial sales for Qualcomm, given Jio's strong user base and the Qualcomm's robust market share of 30% in India. If the American chipmaker is able to capture an identical share in budget smartphones, it could end up shipping more than 60 million chips into India itself in the next five years.

However, Qualcomm's early move into 4G feature-phone chips should give it a higher market share, so its sales should be even bigger on a global scale -- giving its top line a nice boost.