These three large-cap stocks prove there's value in the information you own.

There's an old saying: Knowledge is power. While that's undoubtedly true, in this day and age, access to information may be the most powerful thing on earth. It's also something that can make investors a lot of money.

If you're looking to profit from the power of information, these three large-cap stocks -- technology consultancy Accenture (ACN 4.74%), social media giant Facebook Inc (META 7.19%), and entertainment and media stalwart Walt Disney Co (DIS 3.69%) -- are as well-positioned as any companies you'll find. As a matter of fact, we think they're stocks investors should buy now. 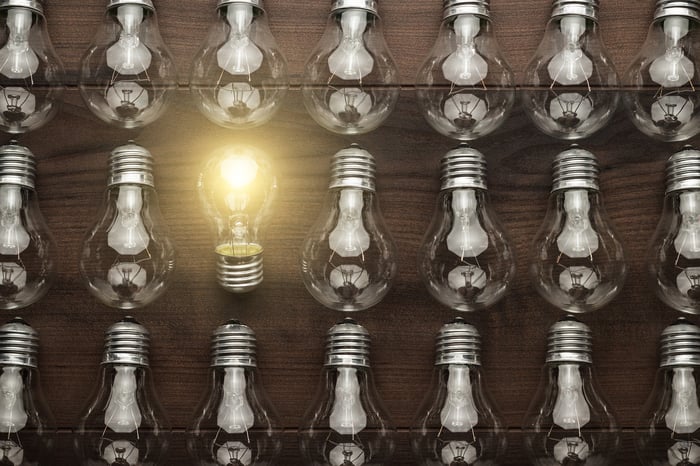 Keep reading to learn how the power of information sets these three large-cap companies apart -- and why they're worth buying this month.

Brian Stoffel (Facebook): It might be surprising to hear, but I have a hard time finding a large-cap stock as attractively valued as Facebook is today. Sure, the company's P/E looks expensive, with the stock trading at 41 times earnings. But we need to appreciate what we're really buying when we purchase shares of the company.

Consider the following: Facebook owns four of the top 10 social media networks -- Facebook, WhatsApp, Messenger, and Instagram -- for a combined total of 4.7 billion users. All of that information is financially important for two reasons. First, it means that there are billions of eyeballs that companies can reach by advertising with Facebook. And second, it means that Facebook has a data trove that can only be matched by Google when it comes to user behavior and preferences. That means Facebook can deliver laser-focused ads that have a higher probability of converting.

Advertisers are willing to pay top dollar for those characteristics. That probably helps explain why the company's revenue has grown by almost 50% per year over the past two years. Considering this trend, the stock doesn't seem nearly as expensive. Its PEG ratio is a very reasonable 1.3, while its forward P/E is 26. Those metrics might not suggest Facebook is cheap, but the best stocks never are -- and I think this price is very reasonable.

Brian Feroldi (Accenture): Cybersecurity. Social media. Mobile. Cloud computing. These are all tech megatrends that will take years to play out. However, it can be tough for investors to pick the ultimate winners and losers in each category since the landscape is constantly evolving. That's why I think a smarter way to invest in these trends is to buy Accenture.

At its core, Accenture is a technology consulting and outsourcing company. The company invests big so that its army of 400,000 workers stay up to date with cutting-edge technology. Accenture then uses its advanced skills to help other companies implement strategies that take advantage of these newer technologies. In the end, the company banks a generous fee for providing this service.

A look at Accenture's most recent report shows that the company's services remain in demand. New-order bookings came in at $9.2 billion for the quarter, which was comfortably ahead of the $8.3 billion in revenue the company reported. That gives it a book-to-bill ratio of 1.1. As long as this figure remains above one, Accenture should be able to push its top line higher.

And yet, despite having a great business model, strong growth prospects, and a long history of returning cash to shareholders, Accenture's stock is trading at only 18 times trailing earnings. In today's pricey market, I'd argue that's a bargain.

Jason Hall (Walt Disney Co): Disney has its share of problems to contend with. As its cash-cow ESPN network continues to bleed subscribers, it is forced to cut costs where it can in order to deal with the impact of sharp increases in broadcasting rights contracts for essentially every major sports league. In the latest quarter, operating income at Disney's cable networks fell 11%, in no small part because of rising content costs at ESPN, even as subscriber revenue keeps falling.

And frankly, it could get a little worse at ESPN before it gets better, with more and more cable viewers cutting the cord every year. The company just announced another round of layoffs of on-air talent in order to reduce its expenses in the face of rising content costs.

But these are short-term changes that long-term investors shouldn't let distract them. The fact is, Disney owns what is almost certainly the most powerful collection of entertainment properties in the world, which it will be able to monetize no matter how the media landscape evolves. The reality is, today's cable-cutters don't stop consuming entertainment content -- they're simply changing how they consume it. And as a producer of some of the world's most desirable content, Disney will remain in an enviable position for decades to come.

Lastly, Disney is reasonably priced, trading around 20 times the past year's earnings. It may not be as attractively valued as it was in the second half of 2016, when it could be bought for as low as 16 times earnings, but its P/E is still far less than the 26 times earnings the S&P 500 sells for today. Bottom line: Disney is the best media content company in the world. Don't let the current challenges at ESPN keep you from seeing the long-term brand power that makes this one of the best large-cap stocks you can buy.