Both Apple suppliers were recently upgraded because of bright iPhone projections, but one of them could be better than the other.

Shares of Apple (AAPL 1.92%) suppliers Skyworks Solutions (SWKS 12.53%) and Cirrus Logic (CRUS 4.18%) are flying high after getting an upgrade from Pacific Crest Securities. Analyst Andy Hargreaves believes Cupertino will manufacture "at least" 100 million devices in the second half of 2017, prompting his colleague John Vinh to upgrade the semiconductor specialists to "overweight" from "sector weight."

Vinh has set a price target of $75 for Cirrus and $120 for Skyworks, indicating around 20% upside from current levels (as of the time of writing). There is no doubt that both these chipmakers could make big money from the next iPhone, but Apple shouldn't be the only reason for investors to put their dollars in them, as Apple has been known to ditch suppliers and build its own intellectual property.

As it turns out, Cirrus relies on Apple for 85% of its business, while Skyworks is less dependent, with 40% of its revenue coming from the Cupertino-based smartphone giant. The key differentiator between the two companies is that Skyworks has been aggressively diversifying its business and Cirrus is taking its time to do the same, making the former a better bet from a long-term perspective.

Skyworks Solutions is pursuing a number of avenues to get more business from non-Apple sources, such as Chinese smartphone companies and small cells. In fact, it is seeing strong content growth in Chinese smartphones, with Huawei becoming its second largest customer. More importantly, the semiconductor specialist is making smart moves to push more content in Chinese smartphones by developing LTE-focused products. 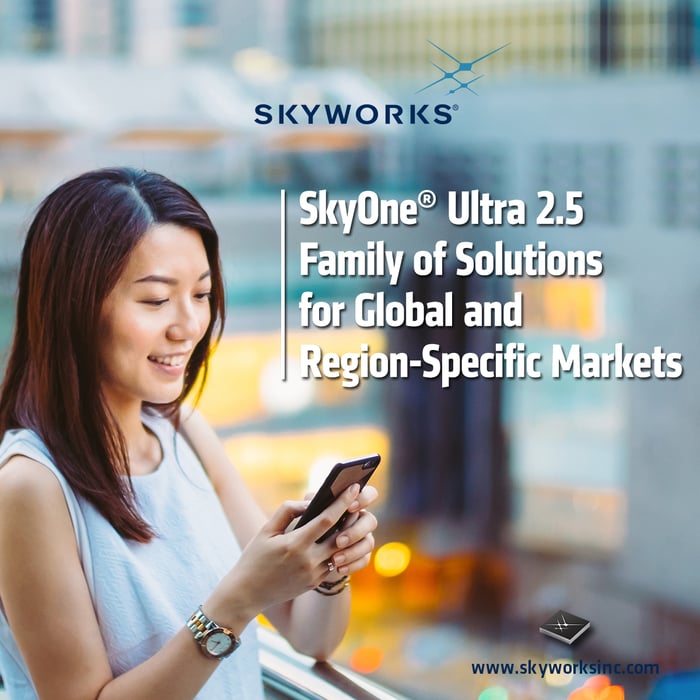 For instance, Skyworks' SkyOne Ultra 2.5 LTE product family could lead to more content gains in China thanks to the country's fast-growing LTE subscriber base and an increase in smartphone pricing. By 2020, there will be 1.5 million LTE connections in the developing market, and China will account for the majority of those, according to GSMA Intelligence. By comparison, the country's LTE subscriber base stood at 762 million last year.

What's more, data from Canalys indicates that average smartphone prices in China have risen almost 25% from 2013 to 2016, and the trend could continue as the likes of Huawei and Xiaomi churn out premium devices. This trend paves the way for Skyworks to drive more dollar content gains at Chinese smartphone original equipment manufacturers.

In addition, Skyworks is trying to make the most of the small-cell market that could be worth as much as $10.65 billion by 2021, according to TechNavio. The company is attacking this opportunity with a new product family of eight power amplifiers and is already supplying them to small-cell solutions provider SpiderCloud Wireless, paving the way for long-term growth in this multibillion-dollar market.

Of course, Apple will be another crucial catalyst for Skyworks this year, as it could build as many as 130 million iPhones from September to December, a substantial jump over the 89 million units it made last year. But the impressive part about this chipmaker is that its iPhone-related gains will be complemented by its moves in other areas.

The biggest problem with Cirrus Logic is that it depends too much on Apple for revenue, which is always a big risk if the iPhone maker decides to use some other audio codec supplier or brings manufacturing in-house. What's more alarming is that the chipmaker might not gain any content in the next iPhone, as the smartphone giant is expected to use the same audio technology.

There's no doubt that higher iPhone builds will give Cirrus a nice boost, but betting the house on a single device is a red flag. In addition, the company is losing ground at Samsung, as the South Korean smartphone maker replaced its audio chips in 60% of Galaxy S7 smartphones, while the Galaxy S8 hasn't brought any notable gains either.

Now, Cirrus is working on emerging audio technologies such as voice biometrics, which is expected to grow at almost 20% a year until 2021. But this isn't a guaranteed success for the chipmaker. Apple already has a patent related to voice recognition-based authentication to its name.

Similarly, active noise cancellation could be another catalyst for the company, as it has provided this technology to Samsung for its latest Galaxy S8 headsets, but the problem is that they're sold separately to the device. In addition, these two new technologies might take a couple of years to ramp up, indicating that Cirrus will continue to remain dependent on Apple for the foreseeable future.

Not surprisingly, analysts expect Skyworks' earnings to grow at 34% annually for the next five years, as compared with Cirrus' projected growth of 20%. The former's quest of tapping fast-growing markets such as small cells and Chinese smartphones should reap dividends in the long run, while Cirrus Logic's dependence on Apple could prove to be a double-edged sword. What's more, both companies trade at identical forward earnings multiples of 14, making Skyworks a better bet given its brighter prospects.