Glu Mobile stock has shot up impressively this year even as its business is struggling, but is this rally sustainable?

Glu Mobile (GLUU) stock has enjoyed a surprise rally on the market this year, rising over 16% so far despite a woeful fourth-quarter report in February. The waning popularity of its mobile games has led to five consecutive quarterly losses and shrinking revenue, but shares have made a surprising comeback over the past month despite the lack of any bullish news: 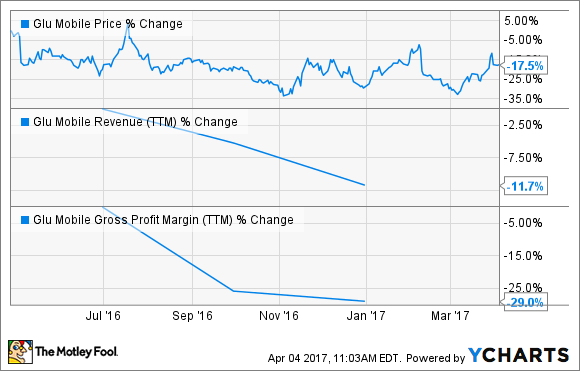 The recent recovery could be an indication that investors are betting on the possibility of a turnaround by buying Glu stock on the cheap, as it was trading close to 52-week lows at the beginning of March. But the mobile gaming specialist's struggles won't be over so soon.

However, a part of Glu's bookings guidance is based on potential revenue from unreleased titles, apart from projected revenue from the existing ones. But mobile gaming is a fickle business, so Glu's revenue will be affected by the popularity of its games. In case any of its upcoming titles don't perform as expected or its existing titles lose momentum, its top line will take a hit.

In fact, Glu's revenue shrank massively last year, and the trend could continue in 2017 if things go south:

The table clearly shows that Glu wasn't able to convert all of its bookings into revenue last year, so investors should take its 2017 bookings guidance with a pinch of salt.

Is a turnaround possible?

Glu Mobile is now changing gears to bring about a level of predictability in its business by building what it calls "platform games." On the fourth-quarter earnings call, CEO Nick Earl said he expects these platform games to generate "repeatable, predictable revenue that stacks year over year," which should help it, to some extent, mitigate the hit-and-miss nature of mobile games. Glu's recent acquisition of Crowdstar was driven by its intention to build such platform games, giving it control over a popular title such as Covet Fashion, which has seen a spike in annual bookings every year since going online in 2013. The Tap Sports Baseball franchise is another potential catalyst, as its bookings jumped from $12.9 million in 2015 to $27 million last year.

Glu has grand plans for this title: It is licensing intellectual property from Major League Baseball, which will allow it to use the logos, uniforms, and player profiles of all 30 MLB teams. This will allow the mobile-gaming specialist to deliver more authentic baseball gameplay to users, leading to a stronger performance both this year and in the long run.

More importantly, Glu Mobile is now turning to specialty studios to churn out games. For instance, it has moved Racing Rivals from its own studio in Long Beach to a group of developers led by Travis Boatman, a former Electronic Arts and Zynga executive. Glu is in discussion with more creative heads to lead its intellectual properties, which is a smart move as that could strengthen the quality of its games.

What's more, Glu's strategy of outsourcing some of its games will allow it to reduce overheads and arrest the slide in its margin. In fact, the company has decided to shut down two of its studios and lay off over 100 employees as a part of a restructuring plan.

Glu Mobile's moves indicate that it is trying to pull the right strings to get its house in order -- trying to establish a recurring source of revenue and farming out game development to specialized teams, while also reducing its cost base. But investors should wait and see if its initiatives are actually bearing fruit before buying into Glu Mobile's recent rally.