Many income investors screen for new stock ideas by concentrating on yield alone. While I certainly love buying stocks that offer a big payout, I've learned the hard way that a high yield can sometimes be a warning sign.

Consider Tailored Brands (NYSE:TLRD) and DineEquity (NYSE:DIN). Both stocks have been crushed over the last year and are currently trading on the cheap. Add in a big yield and one might be tempted to call both stocks a buy. However, the devil is often in the details, so we need to take a closer look at the two businesses to determine if they are actually worth owning. 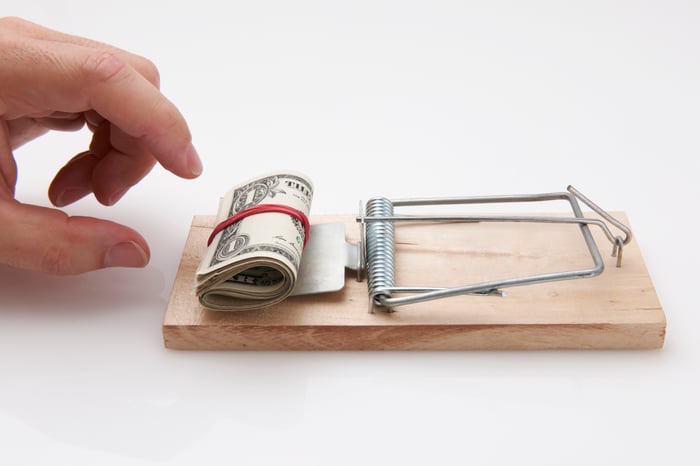 While the name "Tailored Brands" might not sound familiar, you probably have heard of this company's two main retail concepts: Men's Wearhouse and Jos. A. Bank. These two businesses were brought under the same roof thanks to a $1.8 billion acquisition in 2014. At the time, management believed that the two companies would be stronger together thanks to operational synergies and reduced competition.

Unfortunately, Tailored Brands has struggled to turn this merger into a success. In an effort to boost profitability, the company put an end to Jos. A. Bank's famous buy-one-get-three-suits-free promotion that many customers had become accustomed to receiving. Predictably, those same customers responded in kind by choosing to shop elsewhere, leading to horrific declines in same-store sales.

Fast-forward to mid-2016 and Tailored Brands was forced to admit that the deal had turned out to be an unforced error. The company recorded a $1.15 billion non-cash charge related to the merger and announced that it would be closing more than a hundred Jos. A. Bank stores. 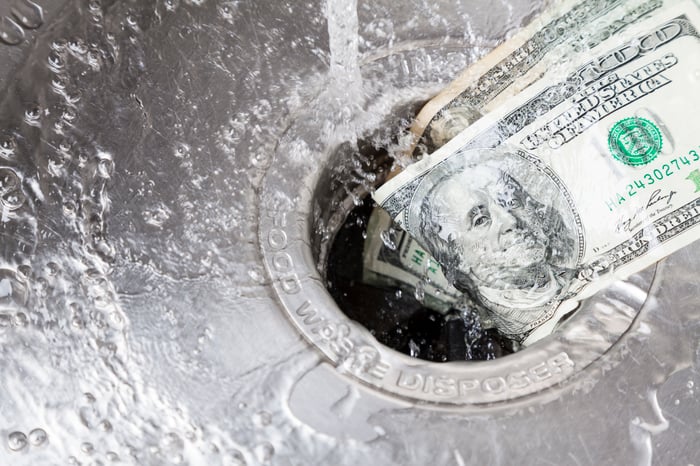 Looking ahead, management isn't exactly expecting the company's fortunes to turn around anytime soon. For 2017 management is projecting that its Men's Wearhouse stores will post a negative comp in the low single digits. Meanwhile, Jos. A. Bank's comps are expected to increase by the mid-single digits, but since that's off a greatly reduced base, it is hardly a victory.

Given the poor operating results and writedown, it shouldn't come as a surprise that shares have been clobbered over the past few years. The company's stock is down more than 80% from its 2015 high, and it is currently trading for less than eight times full-year earnings estimates. Meanwhile, the company's dividend yield has been pushed up to a huge 5.4%.

Despite Tailored Brands' troubled past, Wall Street is actually projecting that better times lie ahead. Market watchers are forecasting long-term profit growth of 8% annually from here if the company can right the ship. If those projections prove to be accurate, then this stock could be poised for a strong rebound.

Do these figures make the company's shares a buy? While I admit that there could be value here, I personally never like to invest in a struggling retail concept, no matter how cheap it gets. That's why I'll be taking a pass on this beaten-down stock.

A restaurant concept with leadership challenges

DineEquity is the owner of two category-leading restaurant brands: IHOP and Applebee's. The company currently counts more than 3,700 Applebee's and IHOP restaurants in its portfolio, 99% of which have been franchised.

If you are an investor in the restaurant space, then you are likely painfully aware that the industry has gone through a rough patch lately. Consumer spending in restaurants has been slowing while wage inflation has been rising. In the context of falling food prices at grocery stores and the nationwide buildout of many restaurant concepts, it isn't shocking that industrywide profitability has been on the decline.

Unfortunately, DineEquity hasn't been able to sidestep these struggles. In fiscal 2016, IHOP's domestic comp sales fell by 0.1% while Applebee's plunged by 5%. That caused adjusted net income to plunge by 6% and adjusted earnings per share to fall by 3%. The company doesn't see this situation reversing itself anytime soon. For fiscal 2017, it is projecting that Applebee's comps will fall by another 4% to 8%, while IHOP is expected to post a decline between 0% and 3%.

If the company's waning performance wasn't bad enough, DineEquity's shareholders have also had to deal with turnover in the executive suites. In early February investors learned that now-former CEO Julia Stewart was resigning. Less than a month later CFO Thomas Emrey also stated that he was heading to greener pastures. 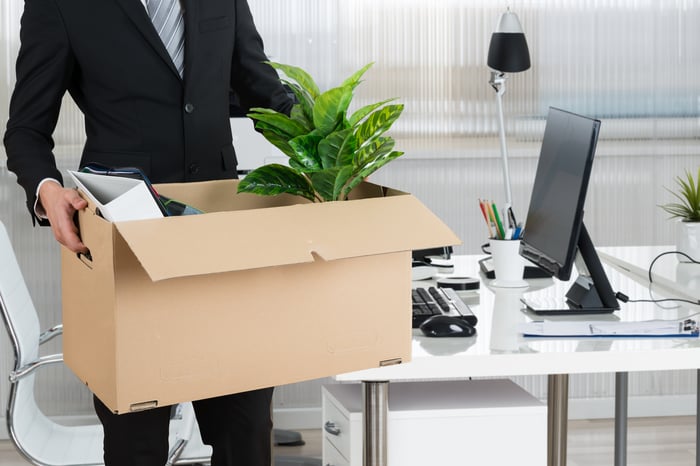 Given the troubling recent news, it is no wonder that shares have struggled. DineEquity's stock has fallen by more than 50% from its 2014 highs, pulling the company's forward P/E ratio down below 10. Meanwhile, its generous dividend yield has soared above 7.1%. With market watchers calling for profit growth of 3% over the next five years, it is possible that shares could be near a bottom.

While I'll admit that DineEquity could be an interesting value play right now, experience has taught me to be wary of struggling businesses that feature a mass exodus in the executive suites. That's why I'm not yet tempted to give this stock the thumbs-up, though I understand why more daring investors might be tempted to do so.