Most companies at least try to buy low and sell high. Not DryShips, which has a history of poor capital allocation when it comes to acquisitions.

There's a powerful allure to buying a stock with a low-single-digit price like DryShips (DRYS). It seems like it would be easy to score a huge return since all the stock needs to do is go up a couple of dollars to turn a small investment into big time payout. However, the flaw in this reasoning is that DryShips' stock is in the low single digits for a reason: The company is an atrocious allocator of shareholder capital. It's for that simple reason that I'd never put this stock in my portfolio.

Over the past few years, DryShips' has bought and sold ships like a drunken sailor. It seems like the only thing more volatile than the company's stock price has been the size of its fleet. For example, the company started last year with a fleet of 23 dry bulk carriers, six offshore supply vessels, and a 40% stake in what's now a bankrupt offshore driller. However, due to its troubling financial situation the company unloaded its stake in the sinking offshore driller and 10 of its dry bulk carriers over the course of the year to raise cash for debt repayment. That said, after shoring up its balance sheet at the end of the year, the company went on a new buying binge this year, buying 14 ships for a total cost of more than $660 million. 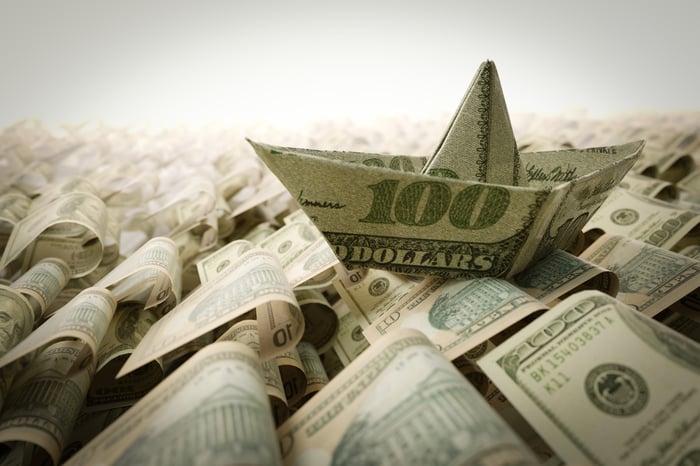 The problem with all this buying and selling is that DryShips timing is often off on both sides of the transaction. For example, in 2010 the company entered the oil tanker market by ordering a dozen newbuild tankers for a total of $770 million. However, three years later the company would sell two of those ships for $21.4 million, which would also free up $101 million in future capex. It followed that sale up two years later by unloading the rest of its tanker fleet in a series of transactions with its CEO. Four of the ships sold for $245 million while the last six went for $291 million. Add it up, and the company jettisoned $770 million worth of tankers for what amounted to $658.4 million, so it could free up capital and pay down debt.

In addition to that sale, the company also unloaded 17 dry bulk vessels to its CEO in 2015. While the company received $377 million for the ships, that price resulted in the company recording a $373 million impairment charge after it wrote down the value of the assets on its balance sheet. In addition, the company decided to classify the remaining vessels in its fleet as held for sale, resulting in another $422 million impairment charge. That's a $795 million loss because the company paid too much for vessels during the good times and then had to sell them at fire sale prices when conditions went south.

However, as bad as DryShips has been at allocating capital toward vessel acquisitions, it has been even worse at choosing the right form of capital to finance its ambitious growth plans. During its previous buying binge, the company relied heavily on bank debt to fund its expanding fleet, often securing the vessels as collateral. While this allowed the company to access a cheaper funding source and take on more leverage per ship to fuel additional growth, it was a poor choice given the volatility of shipping rates. Overall, the company's outstanding debt grew from about $500 million in 2006 to more than $5.5 billion a decade later, causing interest expenses to rise from around $25 million in 2008 to more than $325 million in 2015. Unfortunately, those interest payments became impossible to maintain when earnings plunged into the red last year as a result of sinking shipping rates.

Meanwhile, after nearly sinking under the weight of debt from its previous buying boom, DryShips has taken a different approach to financing growth this time around by issuing equity. However, as the following chart shows, the company has diluted its stock right into the ground: 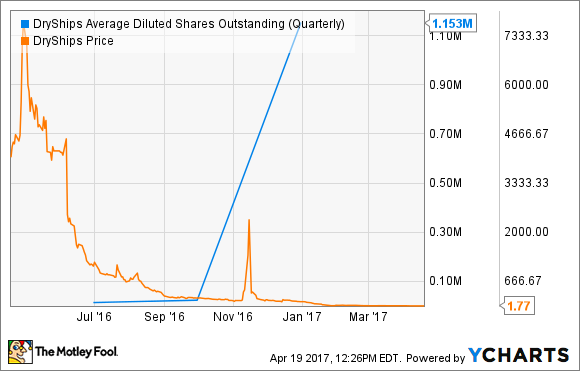 These newly issued shares have proven to be an unbearable weight for the stock because it has continued to issue new shares at lower prices. Meanwhile, to counteract the sinking share price the company has enacted several reserve stock splits that boost the stock just enough so it can issue more shares. This continual dilution is one reason why the company's stock is down more than 99% this year alone. Meanwhile, with more dilution likely on the way, this stock could have even further to sink.

I don't think I've ever come across a company that does a worse job allocating capital than DryShips. It has repeatedly bought ships at the high point of the market only to sell them off during a downturn because it needed the cash to pay down debt. Now the company appears to have found a new way to obliterate investor capital by diluting its sinking stock into the ground. It's this atrocious track record of capital allocation that's the reason why I won't buy this stock.