Even when optimistic about a stock's future, it's important to recognize where the potential trouble lies.

One of the things we take pride in at The Motley Fool is embracing a variety of perspectives and opinions. No one -- not even Warren Buffett himself -- is successful 100% of the time in choosing stocks; therefore, it's a worthwhile exercise to hear what others have to say -- whether supporting or refuting our own beliefs.

It's equally valuable to employ this exercise on one's own. By identifying a company's potential red and green flags, one can be assured that we have a well-informed investing thesis. Most importantly, an investor is better prepared to sell shares when convinced that the investment thesis is broken. Let's practice this exercise by looking at Yamana Gold (AUY 0.59%), a leader in the gold-mining industry. Although I'm bullish on the company's future,here's where the potential danger lies. 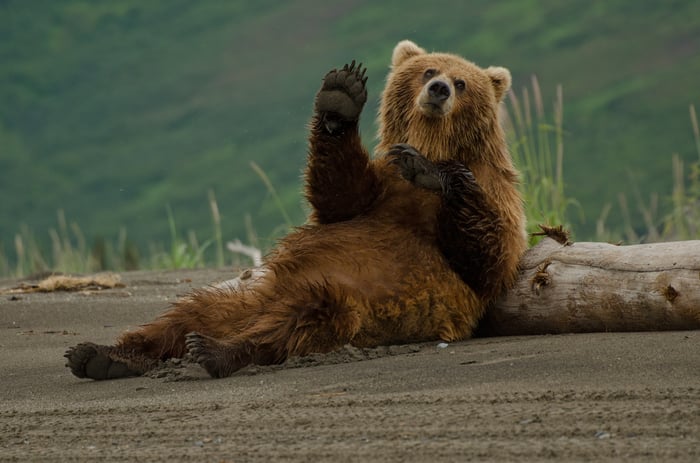 Too many eggs in the basket

Arguably, the greatest reason to be sour on Yamana's future is its growth strategy. During the company's Q4 2016 earnings report, management announced that it would not be seeking acquisitions in the near future. Instead, the company would be self-reliant for growth as it is in an "organic growth phase." To unequivocally announce that Yamana would be eschewing acquisitions is concerning and probably suggests that the company's fiscal health is not as sound as management would have investors believe.

In addressing its "organic growth" strategy, management is largely referring to the development of the Cerro Moro mine. Expected to begin gold production early next year, Cerro Moro is forecast to produce 80,000 ounces of gold in 2018 and 130,000 ounces in 2019, assuming a prominent position in Yamana's portfolio. Bears would argue that this outlook is fairly aggressive, considering construction of the mine is ongoing.

Furthermore, complications in the mine's development -- not out of the realm of possibility -- could eat away at the company's profit margin. In fiscal 2016, the company reported all-in sustaining costs (AISC) on a co-product basis of $911 per gold ounce. Management forecasts average AISC at Cerro Moro for 2018 and 2019 to be below $600 per gold ounce, so a delay in production (or if it's compromised) could have quite a deleterious effect.

Relying on the kindness of strangers

In lauding the company's improved financial position, management points to the fact that it has effected a $370 million reduction in net debt since December 2014. Admirable as this may be, when we dig in further, we find that the company's debt reduction has come at the expense of shareholders.

To keep the drills digging, Yamana has had to continuously rely on equity raises, diluting shareholder value.

Comparing Yamana's increase in shares to the increases of its peers -- Barrick Gold, Newmont Mining, and Kinross Gold -- illustrates the excessive sacrifices in value Yamana has placed on its shareholders. In spite of the growth in its outstanding shares, Yamana has still seen its total debt more than double. However, Barrick, Kinross, and Newmont have all demonstrated the ability to reduce their debt loads by relying on the operational cash that they generate.

With this track record, it's fair to expect that more equity raises are in the company's future. Should Cerro Moro begin production in 2018, this would not yield such a significant increase in cash flow that management would no longer rely on raising equity. Consequently, investors should expect even more dilution.

Clearly, bears are justified in their skepticism regarding management's claims that its financial health is improving. But there is another reason to be dubious. Yamana's debt load may be dwindling, but it's still incumbent upon the company to deftly manage its liquidity. Finding millions of ounces of buried gold means little if the company, likewise, finds itself unable to emerge from a mountain of debt.

To assess the company's liquidity, we'll use the quick ratio that's used to calculate a company's ability to pay short-term obligations by subtracting the current inventories from a company's assets and dividing it by the current liabilities. Ideally, companies will have quick ratios above 1, reflecting that the company has more than $1 in assets for each $1 of debt. 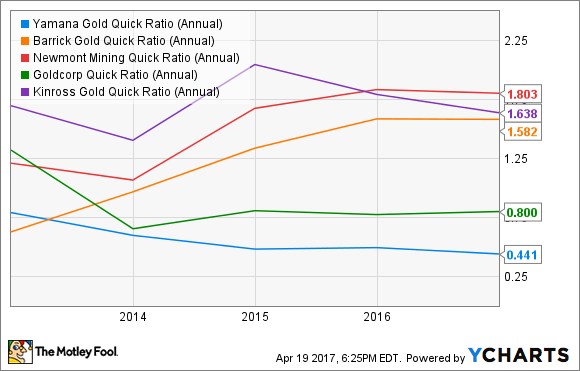 Yamana's ratio of 0.441, in and of itself, warrants cause for concern. But when stacking the company up against its peers, the company's tenuous position becomes even more apparent. Looking for a silver lining, one can argue that Goldcorp isn't faring much better; it also has a quick ratio below 1.0, but this argument is tempered by the fact that Goldcorp's ratio seems to be on the rise while Yamana's maintains a downward trend.

With the price of gold currently hovering around $1,280 per ounce, Yamana's poor liquidity doesn't pose an immediate threat. But if the price of gold drops significantly, this could very well change. In its recent 10-K, management forecast AISC between $890 and $910 per gold ounce for fiscal 2017-- an estimate which it bases on the price of gold being $1,250 per ounce. Should gold drop significantly, though, Yamana will see its costs rise and margin decrease. At this point, the company's poor liquidity could rear its ugly head and threaten the company's ability to service its debt.

Clearly, Yamana's future success is far from guaranteed; however, I believe Cerro Moro -- and other development projects -- will be executed and provide significant value. Of course, I'll be watching these projects, as well as the company's financials, to confirm that my bullish outlook is warranted.