Video games are one of the world's largest forms of entertainment, and this spells opportunity for Facebook, Alphabet, and Amazon.com.

Video games don't get the headlines for technology giants like Facebook (META 3.01%), Alphabet (GOOG 1.56%) (GOOGL 1.90%), and Amazon.com (AMZN 3.04%), but make no mistake -- these companies are aggressively competing to control a meaningful share of the $100 billion video game industry.

The video game industry is growing about 6% per year, with mobile gaming serving as one of the key drivers of that growth. In addition to mobile gaming, two new markets -- e-sports and virtual reality (VR) -- are small but growing fast. 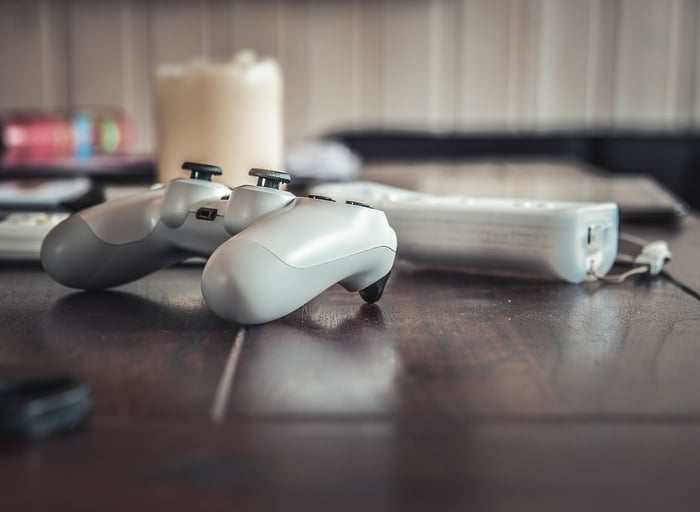 People are beginning to spend as much time playing games as they do on social media or on streaming services like Netflix. One reason is that technology advancements on smartphones and tablets are gradually making mobile games more complex, like console or PC games. But, this growth in mobile gaming is placing a burden on game developers without the expertise to provide online infrastructure that can support the huge spikes in usage when new updates or content are released for a particular game.

Developers are turning to cloud solutions to split the processing burden of a game between cloud servers and the mobile device. The results: a much smoother gaming experience for the player, and more demand for cloud providers such as Alphabet's Google Cloud Platform and Amazon Web Services.

The mobile gaming market generated nearly 40% of the total video game industry's revenue in 2016, and revenue from mobile gaming increased 18% in 2016, to about $40 billion. Mobile is expected to be a key driver of the industry's growth for the foreseeable future.

The concept of someone paying to go to a venue to watch others compete in a video game might seem strange to most, but this is a $1 billion market that is growing fast.

The global e-sports audience is estimated to be 385 million and could grow to 500 million by 2020, according to Newzoo. Because the great majority of e-sports fans watch competitions online, the e-sports opportunity plays right into the hands of companies like Alphabet and Facebook that already have social platforms in place to connect people with content.

Amazon, however, took a big step ahead when it acquired Twitch.tv for $970 million in 2014. Twitch is a platform where users can live-stream their PC games to other gaming enthusiasts, and it has a staggering 100 million monthly viewers. The game streaming site also broadcasts e-sports tournaments around the world. Competition between Twitch and Alphabet's YouTube has become tense lately. Through 2016, Twitch had an important partnership with ESL -- the world's largest e-sports company -- to broadcast e-sports events. However, ESL recently moved exclusively to YouTube, a sign that YouTube is gaining ground on Twitch.

And then there's Facebook, with its network of 1.2 billion daily users. There's no doubt Facebook could be a sleeping giant in e-sports viewing, but it has a ways to go to catch up to its competitors. Unlike Twitch and YouTube, Facebook has no dedicated streaming page for gaming.

The social-media giant is making progress with its recent release of the Facebook Live video feature for computers, after only being available on its mobile app. This will allow gamers to stream live gameplay to followers, but it lacks the monetization features provided by Twitch and YouTube for popular game streamers.

While Facebook is trailing YouTube and Twitch in e-sports, Facebook is investing heavily in VR, which is expected to become a $45 billion market by 2025, according to Grand View Research. The social-media giant purchased Oculus -- the maker of the Rift headset -- for $2 billion in 2014.

Oculus, Alphabet, Sony, Samsung Electronics, and HTC all shipped VR headsets in 2016, and the combined results appear to have fallen below expectations, but that really depends on who you talk to.

The early VR is really targeted at early adopters. And I think the focus of ensuring an excellent experience that surprises people ... has really been a good focus ... I think the first year was absolutely a great success.

Facebook CEO Mark Zuckerberg, on a recent conference call, made it clear that Oculus would probably not be profitable for quite some time, as the company continues to invest in VR development:

I don't think that there is really a strategy to pull this in from ten years to five ... I would ask for the patience of the investor community in doing that, because we're going to invest a lot in this, and it's not going to return or be really profitable for us for quite a while.

The technology promises not only to deliver a new immersive gaming experiences, but also to change the way people communicate with each other. However, it's not likely to catch for a while, at least until headsets get cheaper.

The video game industry has a solid ecosystem

The video game industry is doing well on its own, with the investment put into it by game publishers like Activision Blizzard and Electronic Arts. But social-media giants and Amazon committing resources to the industry is a great sign for the future of gaming.

Why Are Google's Founders Back After the Recent Layoffs?
401%