Despite the fallout from the fake accounts scandal, Wells Fargo should be just fine over the long run.

By now, the Wells Fargo (WFC 0.40%) fake accounts scandal is widely known, and it has left many shareholders wary of continuing their investment in the bank. Despite the scandal, which was a horrible error by the bank, there's still a good long-term investment case to be made for the bank.

If you somehow aren't familiar with Wells Fargo's infamous "fake accounts" scandal, you can read a good discussion of it here by my colleague John Maxfield. The short version is that in early September 2016, news broke that 5,300 Wells Fargo employees were fired for creating as many as two million unauthorized checking and credit card accounts in order to meet aggressive sales targets. 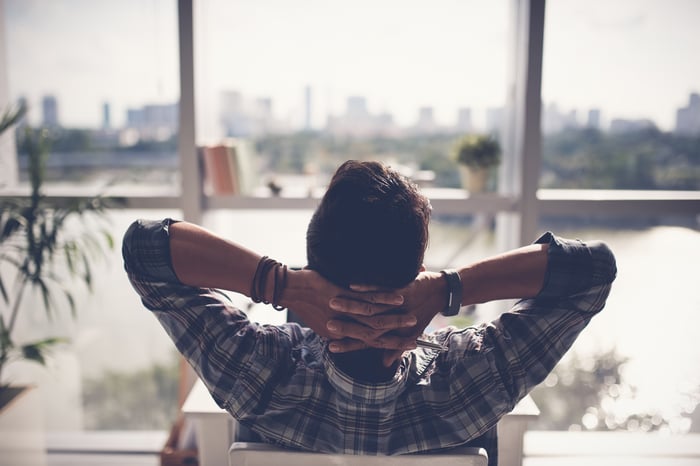 Clearly, this was a major error by the bank. Warren Buffett, whose company Berkshire Hathaway (BRK.A -0.72%) (BRK.B -0.58%) owns just under 10% of the bank's outstanding shares, said Wells Fargo made a "terrible mistake" by creating an incentive system based on getting customers to sign up for as many accounts as possible, whether they needed them or not. Although Buffett didn't sell any of his shares in the wake of the scandal, he wasn't alone in his disappointment with Wells Fargo.

Wells Fargo has underperformed the banking sector since the news broke

Not surprisingly, Wells Fargo stock dropped like a rock in the days following the September 2016 announcement of the scandal. Within a few weeks, Wells' stock was down more than 10%.

Sure, the post-election rally in the financial sector helped, but Wells Fargo has still lagged the rest of the sector since the news broke. In fact, the bank has underperformed the overall banking sector by more than half. 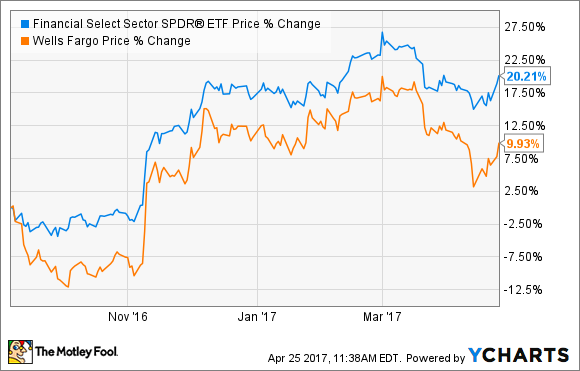 The bank's earnings have suffered a bit

To be fair, there were some bright spots in Wells Fargo's first-quarter earnings report. For example, total deposits rose 7% year over year, and net interest income grew by $633 million, or 5%, thanks to rising interest rates. Also, loan-loss provisions were down 44% from the same time last year, as energy sector loan defaults turned out to be much less than expected.

However, the fallout from the fake accounts scandal is apparent. Noninterest income fell year over year, including a 23% drop in mortgage banking income. Also, noninterest expenses grew by 6% from last year, and while it's tough to pinpoint exactly how much of the increase is a direct result of the scandal, it's fair to assume that it didn't help keep costs low.

The item from the first-quarter's earnings that was most concerning is the four-percentage-point increase in the bank's efficiency ratio from 62.7% from 58.7% in the same quarter last year. Wells Fargo has consistently been a highly efficient bank, which is why this is particularly troubling to investors.

However, the other big draw to Wells Fargo is its consistently strong profitability, and this hasn't changed in the wake of the scandal. The bank's return on equity (ROE) of 11.54% and return on assets (ROA) of 1.15% are still well above the industry benchmarks of 10% and 1%, respectively, as they have consistently been for some time. 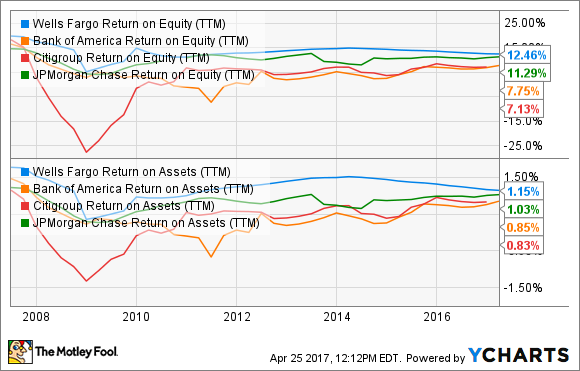 CEO Tim Sloan said the bank "continued to make meaningful progress in the first quarter in rebuilding trust with customers and other important stakeholders."

In a nutshell, the fake accounts scandal isn't completely in the rearview mirror just yet, but the fallout from the scandal should eventually subside. And when it does, Wells Fargo will still be an incredibly strong banking institution -- and well-positioned to benefit from rising interest rates and potentially looser banking regulations.

Despite the fake accounts scandal, which admittedly was a terrible mistake, Wells Fargo is still one of the best-run banks in the U.S. It consistently runs the most profitable banking operation out of the "big four" U.S. banks, and it does so without taking on excessive risk. I believe the drop in efficiency is temporary and will subside sooner rather than later.

In a nutshell, not only do I think Wells Fargo shareholders have nothing to worry about, but the sector underperformance is making me consider adding the bank to my own portfolio. And if I reduce my exposure to certain other bank stocks I own, as I've written about recently, I may do just that.

Here Is Why Wells Fargo Is Shrinking Its Mortgage Business
401%