We examine these semiconductor stalwarts across several dimensions to determine which is the better to own today.

NVIDIA's graphic processing chips (GPUs) enjoy leadership positions in some of tech's most important growth markets, a fact that has fueled the 650% rally in its shares over the past five years. But after losing big to the market over this same time frame, Cypress Semiconductor stock has shown surprising signs of life lately, outperforming NVIDIA and the Nasdaq Composite so far in 2017. 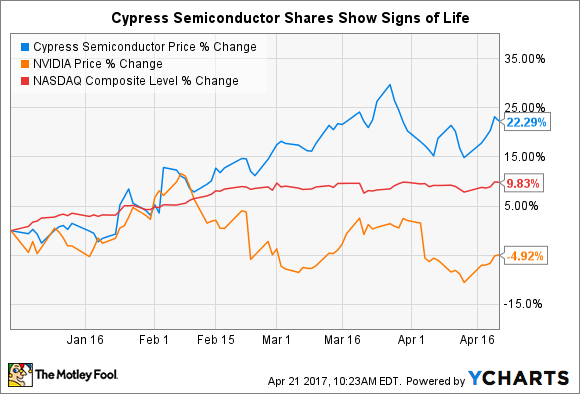 In our first category, NVIDIA demonstrates a clear edge over Cypress in terms of its balance-sheet strength. Here's a quick breakdown of four of the most commonly used financial metrics for liquidity and solvency for the two.

Here, NVIDIA bests Cypress across all three measures of financial fortitude; I prefer to combine cash and investments with debt to create a single net-cash metric. NVIDIA carries more net cash, generates more than 7 times the cash from operations as Cypress, and enjoys a far more favorable mix between current assets to liability. It's the clear winner here.

That said, Cypress' debt burden really jumps out. The company has used leverage to fuel acquisitions in recent years, particularly the $550 million in debt it assumed to purchase Broadcom's Internet of Things business last year, an acquisition that helps diversify its revenue stream into a growing section of the semiconductor market. The majority of its debt comes due in 2020 or later, so the company has plenty of time to reap the benefits of its acquisitions before it must repay its financing. Either way, NVIDIA enjoys the more stable financial footing, making it the winner in our first category.

In terms of their business "moats," NVIDIA edges out Cypress for a few important reasons.

As Cypress' operations go, the company splits its revenue almost evenly between its memory-chip division and its microcontroller and connectivity divisions. Making memory chips currently drives the bulk of the company's financial performance. Though Cypress lost hundreds of millions of dollars last year, its memory business generated $192 million in operating profit from $928 million in sales. But as we've seen with other memory-chip makers such as Micron Technology, the commoditized nature of most memory products makes it difficult to consistently generate profit on an annual basis.

Worse yet, there isn't much to love with Cypress' microcontroller and connectivity business, either. Though some of its acquisitions should eventually produce results, the segment has lost money in each of the past three years, even as segment sales have almost tripled.

NVIDIA, on the other hand, enjoys dominant and highly lucrative positions in each of its core markets. As just one example, the company's GPU business, which produced 82% of its $6.9 billion in sales last year, generated an impressive $2.1 billion in operating profit.

Better still, it enjoys significant growth opportunities. Just to list a few estimates, various trustworthy sources estimate that self-driving cars, artificial intelligence, and PC gaming represent a combined long-term addressable opportunity of over $62 billion for NVIDIA. And so, as with the analysis of financial strength, NVIDIA wins this assessment of durable competitive advantages with ease.

Last but not least, let's compare the two companies' valuation. Here's a snapshot of three of the most commonly used valuation metrics for NVIDIA and Cypress Semiconductor.

NVIDIA trades at a fairly steep premium to the S&P 500's earnings valuation of 26, but as we saw, the GPU specialist's long-term earnings growth opportunity deserves a premium. The question any investor needs to answer is how NVIDIA's valuation premium relates to its likely long-term trajectory. We have a few clues to help us find an answer.

The average of sell-side analysts currently projects NVIDIA to grow its revenue 16% this year and another 12% next year. Over the next five years, they estimate it will compound its EPS at an 11% average annual rate. Though certainly above average, low- to mid-single-digit growth alone probably isn't a rapid enough expansion to justify NVIDIA's current P/E. However, I think this also brings up an important point when it comes to investing in the GPU specialist.

Most of the upcoming growth from major trends such as self-driving cars will still be coming to market in 2022, the outward limit of analysts' current estimates. So it seems likely that the company's growth could ramp up considerably over the next 10 and 20 years as many of the big-ticket trends associated with its investment thesis migrate from concept to commercial product, something current estimates and multiples simply cannot capture with any degree of precision.

As for Cypress Semiconductors' valuation, the company seems closer to fairly priced. Cypress should switch to profitability in the year ahead, a much-needed sign of progress from a company that's demonstrated a lack of results over the past few years. Analysts see revenue rising 11% this year and 5% next year, while sales are expected to compound at a 58% average yearly rate over the coming five years; remember, though, that the company's current losses mean EPS will be starting and growing from zero. However, it doesn't seem as if a clear mispricing exists in Cypress' shares, either.

And the winner is... NVIDIA

You may have sensed this coming. With its numerous, sizable growth levers, the company looks like a strong contender to outperform the market averages over the long term. Cypress is clearly headed for surer footing after a grinding restructuring. However, between the two, NVIDIA still stands as the better stock to own today for long-term investors.