The online real estate leader jumped despite a lack of company-specific news. Here's what investors need to know.

Shares of Zillow Group Inc. (Z -1.65%) (ZG -1.89%) climbed 13.8% in the month of April, according to data provided by S&P Global Market Intelligence, ahead of the online real estate specialist's impending first-quarter 2017 report.

Apart from the addition of several new multiple listing service (MLS) partners throughout the month -- which helped increase Zillow's coverage of active listings in the U.S. to 95% -- there was no earth-shattering news to spur last month's steady, sustained rise. But it's also worth noting that Zillow stock slumped in March amid reports that its mortgage business may have violated mortgage regulations -- something that at least one of my fellow Fools has already argued is unlikely. 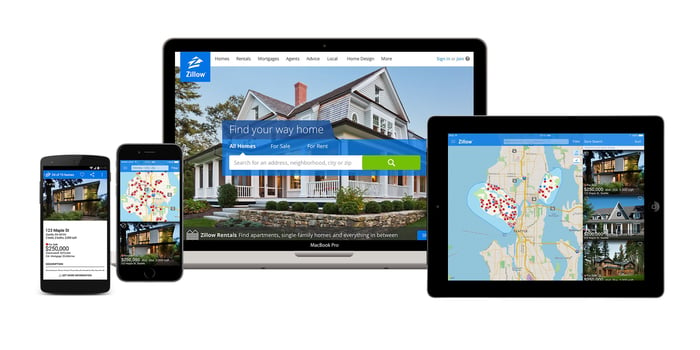 On a more positive note, Zillow was the recipient of an encouraging update from the Baron Opportunity Fund last month. More specifically, Baron VP Ashim Mehra noted that Zillow stock dropped after its 2017 profit outlook in February missed expectations "due to strategic investments and what we believe are conservative expectations for the revenue impact of several recently launched new products."

"We believe these products will meaningfully drive Zillow's revenue capture of real estate advertising and will increase in their impact as we move through 2017," Mehra elaborated per GuruFocus. "As the leader in a highly fragmented market, we think Zillow remains well positioned to continue to grow its market share."

Those of you who follow my musings here at The Motley Fool know I agree with that sentiment, and I stated as much shortly after Zillow's solid fiscal fourth-quarter 2016 report in February.

Of course, whether Zillow Group sustains its recent rise remains to be seen, and will likely depend on what it says in its second-quarter earnings announcement this Thursday, May 4, 2017. But given Zillow's impressive end to 2016, its habit of under promising and over delivering, and in light of Baron's words of validation, I won't be the least bit surprised if investors are treated to another great report later this week.