Please ensure Javascript is enabled for purposes of website accessibility
Log In Help Join The Motley Fool
Free Article Join Over 1 Million Premium Members And Get More In-Depth Stock Guidance and Research
By Matthew DiLallo – May 2, 2017 at 12:30PM

The regional rail operator continues to forecast improving conditions in the second half of the year.

The first quarter didn't go quite as well as Genesee & Wyoming (GWR) planned. While the regional rail operator enjoyed the benefits from the first full quarter of operations at two recent acquisitions, several other issues weighed on earnings, which sank during the quarter. That said, the company expects to put many of these matters in the rearview mirror because of several catalysts it sees on the horizon that should drive full-year results higher. 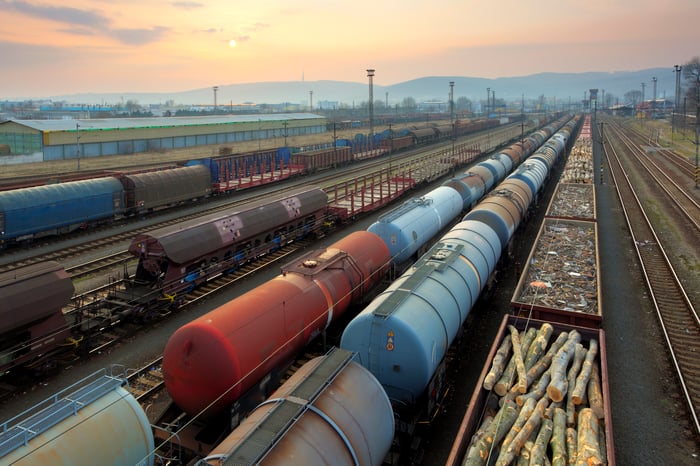 CEO Jack Hellmann commented on what drove results in the quarter:

In the first quarter of 2017, we successfully completed the integration of the Providence & Worcester in the U.S., we operated the first full quarter of Glencore Rail in Australia, and we made good progress in the restructuring of ERS in Continental Europe. Nonetheless, our first quarter financial results were weaker than expected as North American same railroad carload growth of 3% was at the low end of our outlook and our operating ratio was a bit higher than plan, primarily due to track washout and derailment expense. Meanwhile, our 51%-owned Australian business performed better than plan due to the reopening of a customer manganese mine in March, while our U.K./Europe operations were below plan due to a customer bankruptcy in Continental Europe and higher operating costs in our U.K. intermodal business.

The first quarter was mixed as Genesee & Wyoming benefited from two of its recently completed deals as well as improving operating conditions in Australia. That said, several headwinds pushed back against these positives, including slower growth and unanticipated expenses in North America, as well as continued issues in its European businesses. However, what this quarter demonstrates to investors is the power of the company's business model, which enabled it to benefit not only from acquisition-driven growth but its geographic diversity.

That differentiated business model has the company optimistic about what lies ahead. Hellmann noted in the press release that there are several positives on the horizon across all three of its business segments:

In North America, we continue to see modest carload growth with several customer projects starting up later in the year. In Australia, we expect to benefit from shipments from a reopened manganese mine in the Northern Territory and continue to see significant new business opportunities, making us optimistic for 2017 and beyond. In the U.K./Europe, we expect to complete the restructuring of ERS in the second quarter, to close on the previously announced acquisition of Pentalver in early May, and to see improving intermodal performance as new U.K. port calling patterns are established by the shipping lines, collectively yielding a significant improvement in financial performance in the second half of 2017.

Hellmann also pointed out that the Genesee & Wyoming continues to generate robust cash flow, which gives it the flexibility to make more deals.