Please ensure Javascript is enabled for purposes of website accessibility
Log In Help Join The Motley Fool
Free Article Join Over 1 Million Premium Members And Get More In-Depth Stock Guidance and Research
By Daniel Sparks – May 3, 2017 at 3:10PM

There have been some big changes over at Etsy. Here are the highlights from the marketplace operator's first-quarter earnings release.

Marketplace platform for creative goods specialist Etsy (ETSY 0.27%) surprised investors on Tuesday when, along with reporting its first-quarter earnings, management said it is replacing its CEO with board member Josh Silverman, effective immediately.

Here's a look at the first quarter, along with an overview of Etsy's sudden CEO change.

Etsy's gross merchandise sales (GMS) on its platform increased 14.2% year over year to $719 million. The company attributed the growth to a 12.4% year-over-year rise in active sellers and an 18.5% increase in active buyers during the same period.

A 36.4% year-over-year jump in operating expenses, which management said was primarily due to an increase in employee-related expenses and marketing, pressured earnings and ultimately caused the company to swing to a loss.

Dickerson stepped down this week and was replaced by board member Josh Silverman. Dickerson also resigned from his chairman position, which will be filled by Etsy board member Fred Wilson.

Silverman, who has two decades of product development, marketing, and e-commerce experience, is well-qualified for the CEO position, according to Etsy:

His deep industry experience includes leading and growing consumer technology companies and scaling global marketplaces. Josh previously served as President of Consumer Products and Services at American Express. Before American Express, Josh was CEO of Skype, CEO of shopping.com, an eBay company, and held various executive roles at eBay. He was also a co-founder and CEO of Evite, Inc. and he currently serves on the board of directors of Shake Shack. 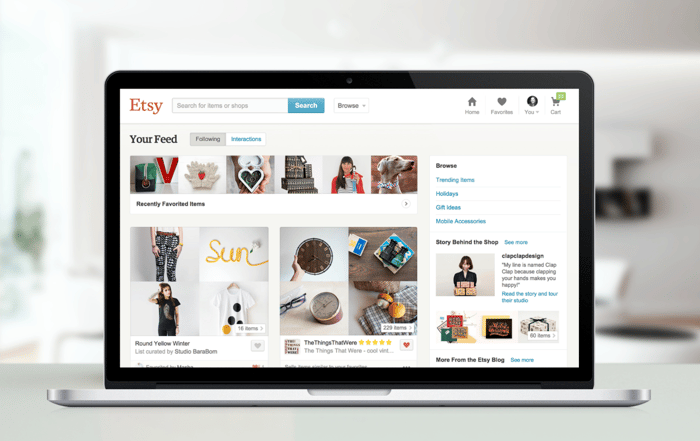 Going forward, Etsy remains optimistic about its business. "I am confident that the fundamental strength of Etsy's business and its unique competitive position will drive long-term growth for all stakeholders," Dickerson said.

Furthermore, Dickerson said the company's workforce reduction builds a better foundation for the company over the long haul: "Today, we announced an expense reduction and realignment initiative to help position Etsy for growth. Etsy's business has evolved significantly over the past 12 years and, while decisions like these are never easy, the Board is confident that this initiative will give the Company greater focus and agility in the near term, while allowing the Company to continue expanding in key growth areas."

Investors will want to tune into Etsy's second-quarter results, as management said it plans to revisit the company's full-year outlook and provide details on its expectations for the year when it reports Q2 earnings.