Please ensure Javascript is enabled for purposes of website accessibility
Log In Help Join The Motley Fool
Free Article Join Over 1 Million Premium Members And Get More In-Depth Stock Guidance and Research
By Rich Smith - Updated May 8, 2017 at 2:06PM

How did it ever go so wrong? You see, Diana Shipping entered April on a high note, its stock soaring 30% until peaking on April 10 at $6.03 per share. The stock stuck close to that high for about a week, until suddenly, everything started to unravel.

In a one-two punch of bad news, on April 18, the Baltic Dry Index, which tracks average carriage rates in the dry bulk shipping industry, began a steep slide that would see it eventually fall from 1,294 to close out the month at 1,109 -- losing 14% in fewer than 14 days. And in an amazing example of bad timing, on the same day, Diana Shipping announced plans to flood the market with as much as $80.5 million worth of new stock, intending to use the money "to fund the acquisition costs of additional dry bulk vessels."

While Diana's intentions for the money may have been good, investors' reaction to the news was not, and Diana Shipping's stock promptly shed 12% of its market capitalization. The damage only got worse when Diana confirmed, a couple of days later, that it would be selling the shares for only $4 apiece, less than the market rate at the time -- meaning Diana's shareholders would see their shareholdings diluted, and diluted even more than they might have expected. 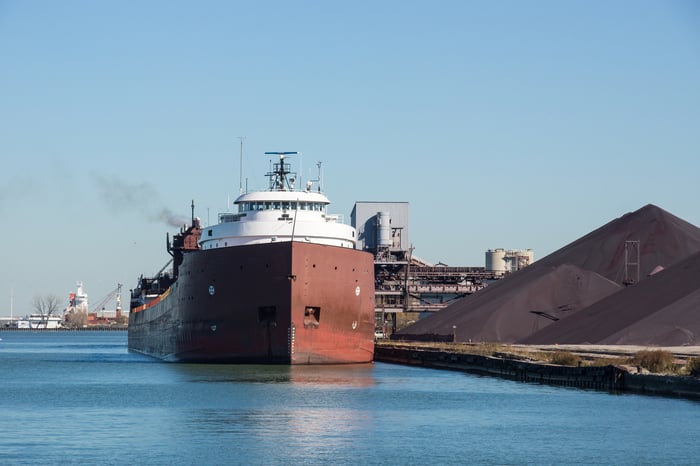 So what's the next shoe to drop for Diana? It could be one of two things. On the bad-news side, the Baltic Dry Index has continued to slump in the early days of May, falling another 10% since the end of April. If investors decide to react by continuing to sell Diana shares, that would be only logical.

There is, however, the possibility that good news could intervene before this month is out. Thanks to the massive share offering announced last month, Diana has increased its share count by about 22.8 million shares -- or roughly 21% of its 106.1 million shares now outstanding. At the same time, Diana is preparing to announce its earnings results for fiscal Q1 2017 on May 23. The "good" news here is that, because analysts are expecting Diana to report a loss for the quarter, and because that loss will be divvied up among more shares now than used to be outstanding, the loss will be divided up among many, many more shares.

That should result in a smaller loss per share than would have been the case before the stock offering, and this could encourage investors to think the stock is doing better than it actually is -- giving a much-needed lift to Diana's stock price. Fingers crossed.