The driverless car market is still just gearing up, and the companies pursuing it are betting on their transformative technologies for the long haul; it's estimated that autonomous vehicles will create a $77 billion market by 2035. But getting to that point will be difficult, and not every early mover will wind up a winner.

Along the way, many of those ambitious companies -- even the ones that do eventually see significant profits from this emerging trend -- will have to contend with issues in the markets that got them this far. And those unrelated issues might give investors a chance to buy into the autonomous vehicle space at a bargain level.

Case in point: Ford (NYSE:F), Qualcomm (NASDAQ:QCOM), and Baidu (NASDAQ:BIDU), three companies that have underperformed the market over the past 12 months. These stocks are beaten up right now, but that doesn't necessarily make them bad bets in the driverless car sector. 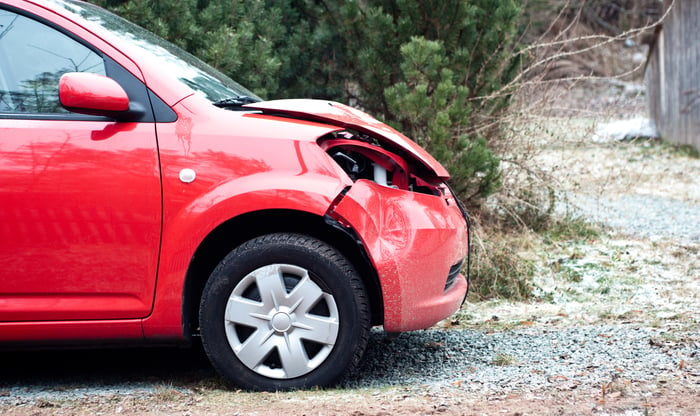 Ford intends to launch its own fully autonomous vehicles by 2021, and also plans to license its technologies out to other companies.

The company says it will have a total of 90 autonomous testing vehicles by the end of this year, and it recently paid $1 billion for a majority stake in artificial intelligence specialist Argo AI, which will help build out the software for Ford's driverless cars. Argo AI will continue to operate independently from Ford, but some of the automaker's engineers will work closely with it. 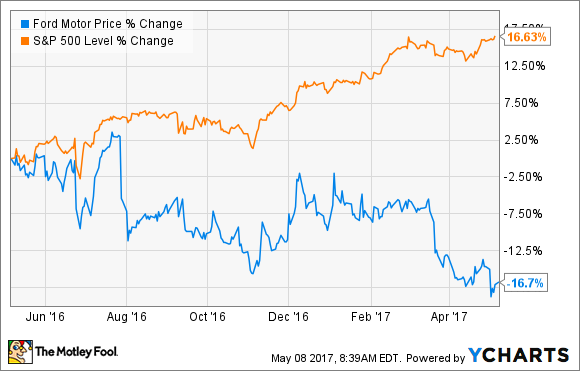 Ford stock has tumbled about 16% over the past year; its most recent dip came on news that the company's net income dropped 36% year over year in the first quarter of 2017..

The company is currently trading at a forward P/E of just 6.71, compared the auto industry average of 11. While it didn't have a stellar Q1, I think Ford's long-term prospects -- including its autonomous vehicle plans -- and its low P/E ratio make it a bargain right now.

The company is in the process of buying NXP Semiconductors (NASDAQ:NXPI), which is the world's largest supplier of automotive processors, for $57 billion. NXP also has also been developing self-driving technology that it plans to launch in 2020, which will bring Level 4 automation (nearly fully autonomous) to vehicles.

Qualcomm says the deal will be significantly accretive to non-GAAP earnings, and generate $500 million of "annualized run-rate cost synergies two years after the transaction closes." It also asserts that the acquisition will expand the company's serviceable addressable markets by an impressive 40% (to $138 billion) in just three years. 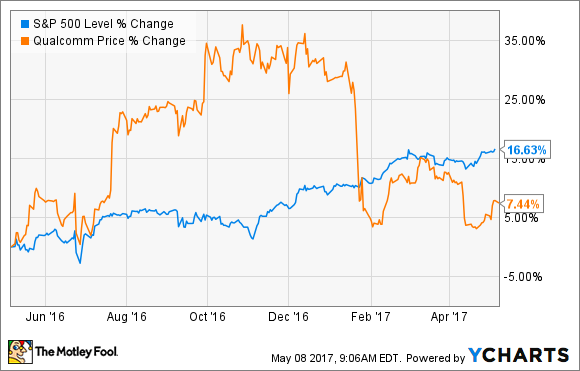 However, Qualcomm's stock took a huge hit a few months ago on news that the Federal Trade Commission was charging the company with anticompetitive practices, and that Apple is suing the company over its patent licensing deals.

Qualcomm is currently trading at just above 13 times is forward earnings, lower than the tech industry average of about 25. There's an expanding market for its processors in driverless-car systems, as well as for NXP's automotive semiconductor and driverless-car technologies, so between them, Qualcomm could easily become a powerhouse in the autonomous vehicle space.

But the company still has to close the deal with NXP, and then prove it can benefit from this massive market. Additionally, Qualcomm may continue to be plagued with legal troubles for a while.

Its potential in the driverless car space and its low P/E make the company look like a bargain right now, but investors should watch closely to see how its issues with regulators and large customers play out.

Baidu is China's dominant internet search company, but it has its fingers in a wide range of tech businesses, including driverless cars. It jumped into autonomous vehicle research pretty heavily back in 2015, and has tested cars with various levels of self-driving capabilities in China and the U.S. since then.

The company's driverless car focus is on developing software for automakers; its current goal is to bring full autonomy to vehicles by 2020. Baidu took another step toward that last month when it opened up some of its software to automakers for testing. The new initiative, called Apollo, will allow automakers to test Baidu's software in controlled environments for now, then bring it to simple urban environments later this year. 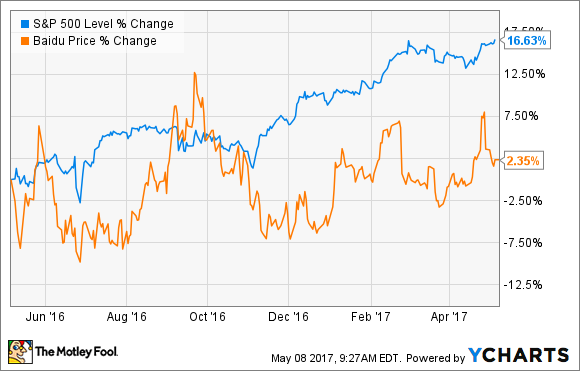 The company recently reported that in the first quarter, its revenue grew by 6.8% and earnings per share were up 10.6%, both on a year-over-year basis. Its price-to-earnings ratio is in the neighborhood of 24, which is nearly identical with the tech industry average. But Baidu has failed to impress investors over the past year, and the company's share price growth has lagged far behind the S&P 500.

While I've been bullish on some aspects of Baidu's driverless-car plans in the past, I'm starting to get skeptical that the company will truly to able to benefit in a tangible way. I used to compare its efforts to those of Alphabet (NASDAQ:GOOG)(NASDAQ:GOOGL), but now that company has spun-out its driverless-car business out of Google into its own entity, called Waymo. I think that gives Alphabet's efforts a focus and independence -- and, ultimately, an ability to benefit -- that Baidu's lack. With the financial benefits Baidu could accrue from its driverless car efforts still so unclear, I can't consider it a good play on the space at the moment.