Please ensure Javascript is enabled for purposes of website accessibility
Log In Help Join The Motley Fool
Free Article Join Over 1 Million Premium Members And Get More In-Depth Stock Guidance and Research
By Neha Chamaria – May 9, 2017 at 9:27AM

What you should do with AK Steel and TimkenSteel stocks after their massive recent drops.

When it comes to steel, April proved why all stocks in one industry aren't alike, regardless of the end market conditions. On one hand, you had steel manufacturers such as Nucor (NUE -0.37%) that made the most of higher steel prices and crushed Street estimates for its first quarter, sending the stock higher. On the other, there were AK Steel Holding Corporation (AKS) and Timkensteel Corp. (TMST 1.10%), which suffered the market's ire when they failed to live up to earnings expectations, so much so that AK Steel ended April with 11.8% losses, while Timkensteel was down 20.3% by the end of the month.

I can see a common link that sent AK Steel and Timkensteel tumbling: sky-high expectations and profit booking. 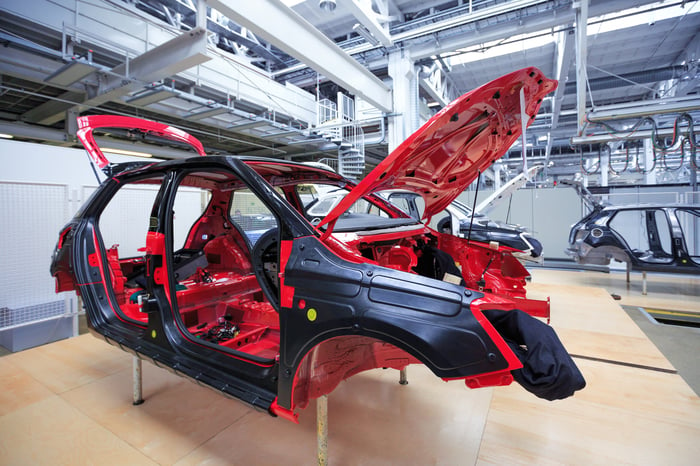 Steel stocks have been on fire ever since Donald Trump won the presidential election. Trump's campaign rhetoric about making a priority of rebuilding America's infrastructure fueled investors' hopes that the commodity rut may finally end, reversing the fortunes of any company even remotely tied to the infrastructure industry. Given steel's indispensable use in building structures such as bridges, highways, and dams, it wasn't surprising to see investors try to catch the bottom and load up on steel stocks. Between November and March, AK Steel had gained 40%, and Timkensteel was up as much as 95%. Comparatively, Nucor was still up just about 25% during the period.

Six months down the line, with no infrastructure plan from Trump's administration in sight yet, investors needed crackling numbers and a bullish outlook from AK Steel and Timkensteel to stay put. Any miss, and investors would take some profits off the table – which is just what happened. Moreover, Nucor raised the bar of expectations really high by reporting its best-ever quarter in nearly eight years, and Macquarie Capital only added fuel to investors' enthusiasm by upgrading a bunch of steel stocks soon after, including bumping up AK Steel to "outperform." 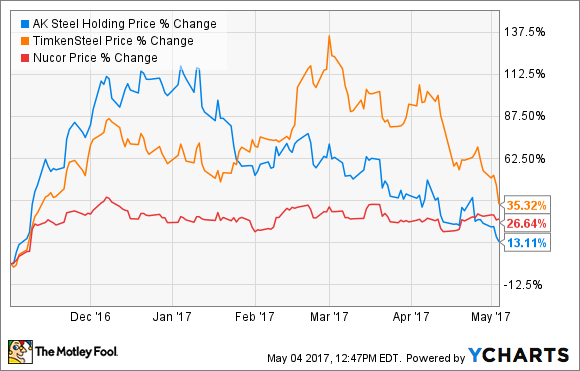 But AK Steel didn't disappoint. In fact, it earned $62.5 million in net profit versus a loss of $13.6 million in the year-ago quarter, turning its "best first quarter net income since 2008." Investors, though, were perhaps disappointed that management didn't give full-year guidance or sounded too optimistic. On a sequential basis, AK Steel projects flat shipments, a nearly threefold jump in outage costs, and lower EBITDA margin for Q2 – something that didn't go down too well with investors.

Timkensteel, which works primarily with alloy steel products, also benefited from higher steel prices and shipments. It reported  42% higher year-over-year sales in Q1 and halved its losses to $5.3 million. But with a guidance of $2 million in profit to $8 million in loss for Q2, Timkensteel didn't offer investors any assurance of whether it'll end the year in the black. That was enough to spook investors, especially after the stock's rally in recent months.

Both AK Steel and Timkensteel stocks are still on a losing streak, and there's more to it than just management's muted outlook.

Major automakers just reported substantial declines in sales for April, triggering fears of a slowdown. Automotive is the largest market for both AK Steel and Timkensteel, so there's a fair reason for investors to be worried. Though management of both companies highlighted how strong demand for larger vehicles such as pickup trucks should keep their sales rolling, there's no denying that the companies will take a hit if auto sales slow down, especially at a time when oversupply and cheap import concerns continue to plague steel markets.

That said, I believe investors may still want to keep AK Steel on their radar, given its strong Q1 performance and a pretty reasonable valuation of 7.8 times price to cash flow. This company shouldn't disappoint if demand for steel picks up.

I'm wary about Timkensteel, though, as its growth boils down to how efficiently it can ramp up operations to play the upturn. As management pointed  out during its earnings call, the company's lead time still lags, and scaling production has proved challenging so far. Add two consecutive years of losses and lack of clarity about whether it'll be profitable this year, and I'd rather avoid Timkensteel for now.