Nike's exit from the golf equipment business was a gift to Callaway.

Callaway Golf Co's (MODG 1.19%) recent quarterly results showed a return to growth and strong profitability for the golf manufacturer. The top line was up 13% to $309 million and net income jumped $4 million to $28 million, which is surprising given how little excitement there is around golf in general right now (ie. no Tiger Woods).

But industry dynamics are working in Callaway's favor after Nike (NKE) announced it would exit the golf business. And the company could be riding the tailwinds of less competition for years to come. 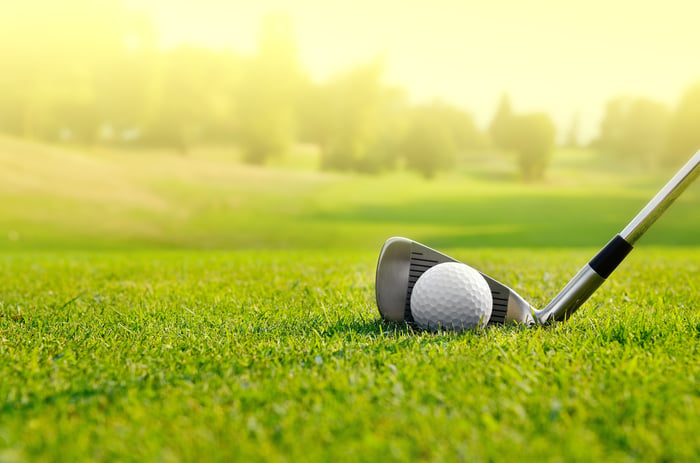 Excess inventory has been flushed out

Nike announced it would exit the golf equipment business in August of 2016, but the inventory of clubs that were already built still needed to be sold. First quarter 2016 results, which showed Callaway's revenue up 13% from a year earlier, may be starting to show a little less competition from Nike's excess inventory.

One fewer major equipment provider in the market should mean less competition, especially when that player is as aggressive as Nike. And the short-term drag of Nike trying to flush product out of the market should finally be over.

Fewer competitors are in the market

Titleist, TaylorMade, Callaway, and Ping are now the four major players in the golf equipment market. They'll be fierce competitors, but the market opportunity they're going to share got a little bigger now that Nike is gone.

This will help financially in a few ways. First, more product should be flowing through the sales channels, which should lower SG&A costs per sale long-term. And greater volume will mean higher utilization for manufacturing and leverage on R&D spending. Look for expanding gross and operating margins as a result.

Nike has always been the big name in athlete endorsements. Sponsoring Tiger Woods has reportedly cost the company around $40 million a year, and Rory McIlroy's original deal with Nike in 2013 was worth $20 million per year. But backing off the equipment business and focusing on apparel means Nike's dollars won't be backing equipment sponsorships. McIroy's 10-year extension to don Nike apparel is only worth $10 million per year, and I find it unlikely any equipment company will pay $10 million annually to sponsor his equipment use.

There are effectively four big brands left in golf equipment -- Titleist, TaylorMade, Callaway, and Ping -- and they're now competing to sponsor the world's best golfers. But there will be less competition between them for athletes, which should reduce sponsorship spending. And that could be another boost to their finances long-term.

In every way, Nike's exit from the golf equipment business should be a boon for Callaway. And I would expect the first quarter to be just the start of the company's growth.

Why Did Callaway Golf Change Its Name?
405%