Please ensure Javascript is enabled for purposes of website accessibility
Log In Help Join The Motley Fool
Free Article Join Over 1 Million Premium Members And Get More In-Depth Stock Guidance and Research
By Daniel Miller – May 10, 2017 at 1:06PM

Today's slide in share price adds to the pain investors have felt over the past month as digital ad revenue increases failed to offset the company's larger revenue problems.

Shares of Time Inc. (TIME), the owner of Time, People, and Sports Illustrated, among other notable magazines and digital brands, are plunging over 10% yet again after the company announced a worse-than-expected first-quarter result and that its dividend would be slashed. The stock has shed 30% of its value over the past three months.

Starting from the company's top line, revenue fell 8% to $636 million, down from the prior year's $690 million, which was below analysts' estimates calling for $641.7 million, per Thomson Reuters. Time's total revenue declined despite a 32% increase in digital ad sales from $90 million to $119 million. The increased digital ad revenue simply wasn't enough to offset a 21% decline in print ad revenue, from $270 million down to $212 million in the first quarter, and a 14% decline in circulation revenue from $238 million down to $205 million, among other factors. 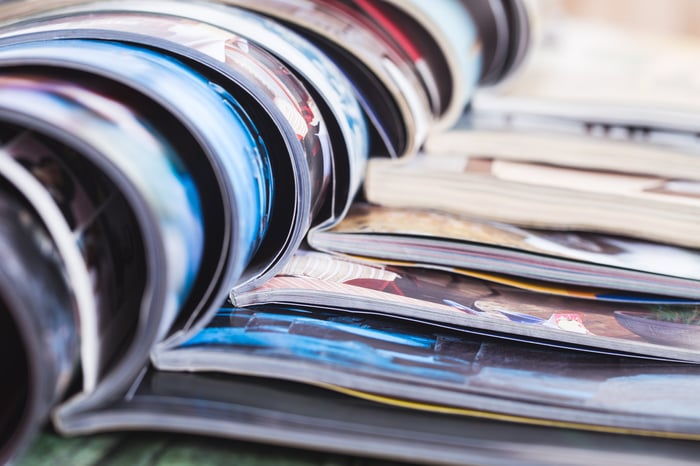 On the bottom line, the story had even fewer bright spots than its revenue. Last year, Time posted a net loss of $10 million, which widened to a loss of $28 million during the first quarter. Adjusted for one-time items, the loss came out to $0.18 per share, which was worse than analysts' estimates of $0.15 per share.

Then, to make matters worse, management announced it would cut its quarterly dividend from $0.19 per share down to $0.04 per share in hopes that the move would help shore up its balance sheet.

In the first quarter of 2017, we made important progress on our strategic plan despite continuing challenges with print advertising revenues. We are taking strategic actions and focusing on key initiatives to put the Company on the right course for the future. We are creating a more vibrant and valuable platform for our advertisers and consumers, further enhancing financial flexibility, aggressively reducing our cost base, rationalizing our portfolio and continuing to invest in transformational growth initiatives.

This isn't the first brutal day for Time investors over the past month, and while the company has some incredibly valuable and recognizable brands and content, its digital business simply isn't strong enough to offset the new reality that print advertising is dying. Don't count the company out just yet, but don't expect any near-term solutions.

What Meredith's Purchase of Time Inc. Means for Magazine Publishing