Although big bank stocks have gotten a bad name over the past decade, they still provide investors with the safest and most secure way to invest in the sector.

Not only can the nation's biggest banks afford to invest heavily in technology, helping them to build the digital delivery channels expected by bank customers today, but they're also watched more closely by regulators. This reduces the risk that they'll suffer existential losses the next time the credit cycle takes a turn for the worse.

Yet there are downsides to big bank stocks that investors should be aware of, too. The first, which I've addressed in the past, is that as global systemically important banks, they have to hold more capital than smaller banks. This is known as the G-SIB surcharge.

These percentages aren't huge, but every bit of leverage a bank can't employ translates into lost revenue and earnings, neither of which is easy to come by in an industry as competitive as banking. 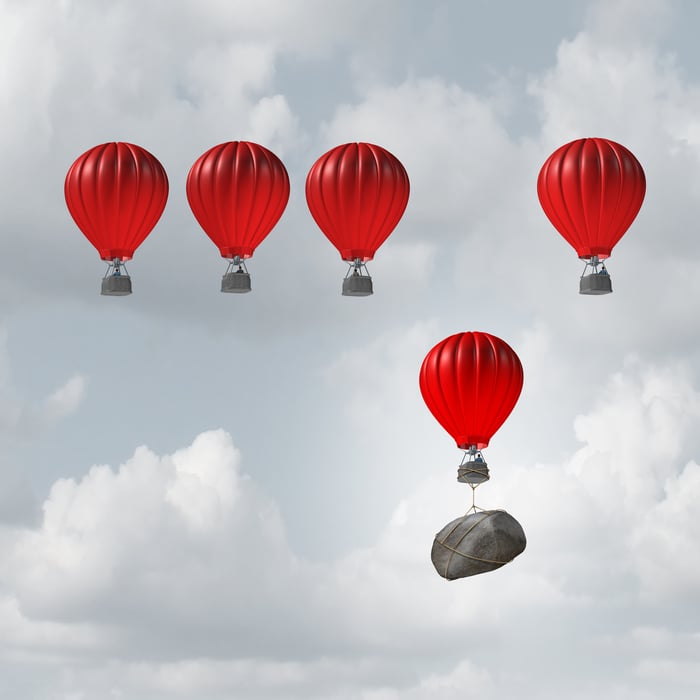 Additionally, none of the three biggest banks in the country -- JPMorgan Chase, Bank of America, or Wells Fargo (NYSE:WFC) -- can grow through acquisitions. Or, more specifically, they can't acquire other depository institutions. More than anything, this is the biggest downside to big bank stocks going forward.

Bank of America CEO Brian Moynihan addressed this issue in an interview earlier this year. In response to a journalist's question about whether Bank of America will once again be a buyer of other banks, Moynihan noted: "It is actually illegal for us to buy another depository institution in the United States. Not a lot of people know that."

The prohibition Moynihan is referring to is contained in the Riegle-Neal Interstate Banking and Branching Efficiency Act of 1994. The Act was passed to deregulate the bank industry by allowing nationally chartered banks to branch across interstate lines. Before, a bank could have branches in multiple states only if the various states' laws permitted it to do so.

The Act stipulated that a bank couldn't continue to acquire other banks if it held more than 10% of domestic deposits in the United States. This wasn't a constraint at the time, as no bank was even close to the 10% cap more than two decades ago. But it is a constraint now for JPMorgan Chase, Bank of America, and Wells Fargo. As you can see in the chart above, all three of these banks have a more than 10% share of domestic deposits. Bank of America had grown its share in the years before the financial crisis. Meanwhile, JPMorgan Chase and Wells Fargo both went over the threshold as a result of acquisitions made during the crisis, with JPMorgan Chase buying Washington Mutual's massive deposit franchise and Wells Fargo more than doubling in size following its purchase of Wachovia.

Consequently, any type of acquisition-based growth strategy is -- for the time being -- off the table for these three megabanks. This doesn't mean that investors shouldn't own these stocks. But it does mean that the underlying banks aren't likely to grow as quickly as they did in the past.